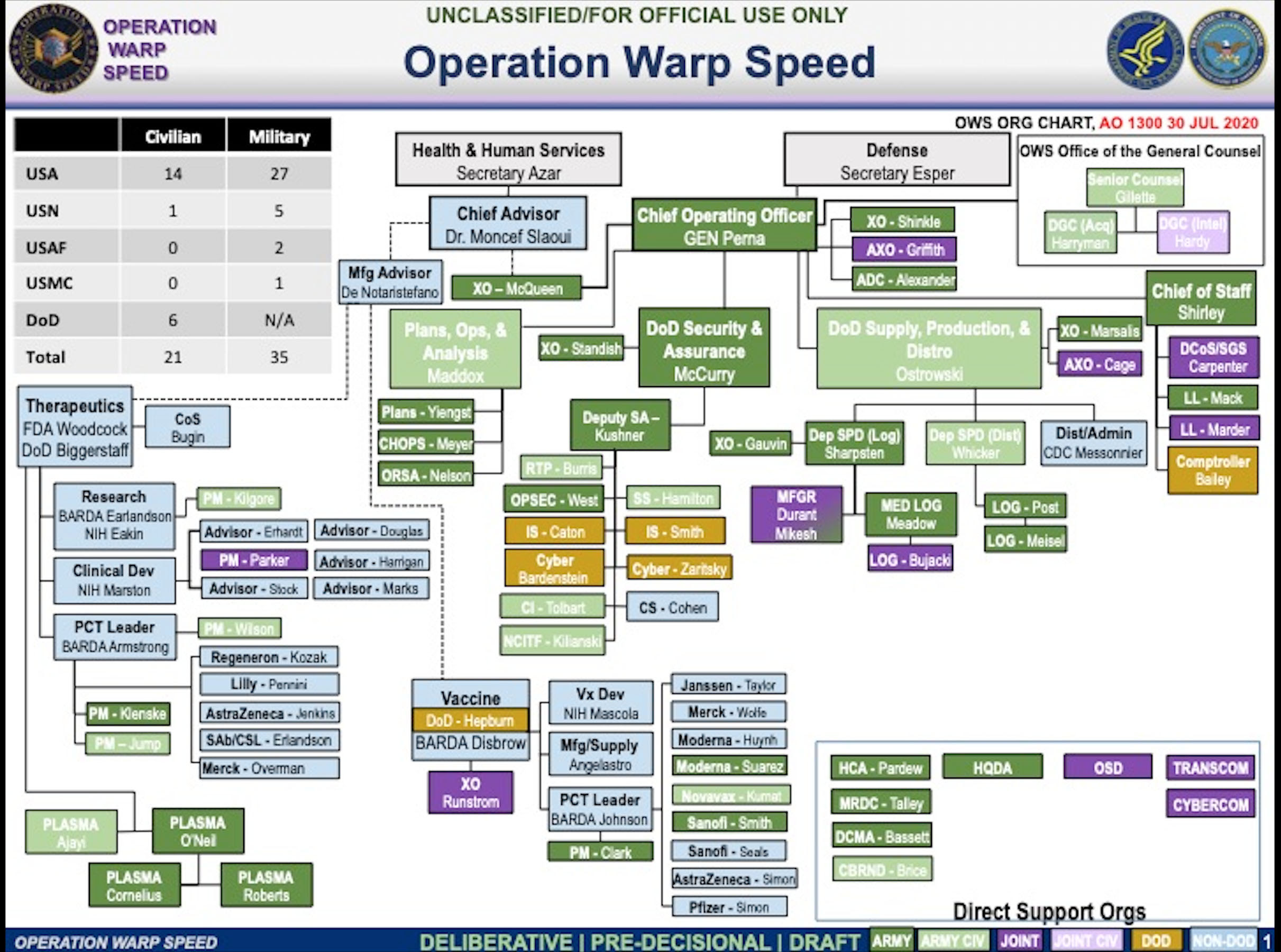 A new document obtained by STAT provides the most in-depth look to date at Operation Warp Speed, the $10 billion initiative aiming to distribute 300 million doses of a Covid-19 vaccine by January 2021. In a set of new, exclusive stories, I unpack the structure of the exceptionally secretive organization and the group of people leading it.
My reporting reveals that Warp Speed relies more heavily on military leaders with little to no experience in vaccine development than has been previously disclosed. In fact, military leaders outnumber civilian scientists 2-to-1, according to the chart obtained by STAT. Federal health officials say the military’s involvement is necessary, not only to tackle logistical issues, like flying in the raw materials needed to manufacture 300 million shots, but also to protect the entire enterprise from “state actors who don’t want us to be successful.” But the military’s involvement is already fanning fears among public health officials, who have worried for months about the marginalization of the Centers for Disease Control and Prevention — the government agency that single-handedly coordinated vaccine distribution in pandemics of the past.

In a second story for STAT, I take a deep dive into the careers and roles of the eight most important people leading the Warp Speed effort. They include everyone from one of Tony Fauci’s close friends, Larry Corey, who is leading Covid-19 trials from his office in Seattle, to an Army doctor who has bet his career on ending pandemics once and for all, and who has worked on some of the most futuristic projects in medicine in pursuit of that goal.

Check out my stories here and here.

Drug industry CEOs head to the Hill again this week

The House Oversight Committee will hold two days of hearings this week with six drug industry CEOs. The hearings are the presumptive climax of an 18-month investigation first launched by the late Rep. Elijah Cummings in 2019.

The hearing could be the most perilous yet for drug makers, who have managed to avoid any major missteps at the multiple Congressional drug pricing hearings that preceded this one. The committee’s probe was extensive: Staff reviewed more than a million pages of internal documents from drug companies. And while we don’t know yet what the committee plans to reveal during the hearings, which are scheduled for Wednesday and Thursday, many of the drugs at the center of the probe already have a long and sordid history, when it comes to pricing.
My eyes will be on Mallinckrodt CEO Mark Trudeau, who is likely to have more trouble than the other CEOs in explaining the pricing for its hormone gel, H.P. Acthar. The company hiked the price of the drug from $40 per vial in 2001 to $39,000 by 2018.
"If I were representing any of these other companies or products, I’d feel a lot better that Mallinckrodt was on the agenda,” Stacie Dusetzina, an associate professor of health policy at Vanderbilt University.“By comparison, the others might look reasonable.”
For more on H.P. Acthar and the other drugs at the center of the committee's probe, check out my new story for STAT here.

How will President Trump address coronavirus during the first debate?

Former VP Joe Biden and Trump will square off in the first presidential debate this evening. The coronavirus pandemic is sure to loom large: Trump’s approval rating for his handling of the pandemic is at 41%, according to RealClearPolitics, which averages the various polls on the topic. Joe Biden has also campaigned hard on fundamentally revamping how America deals with the pandemic, and has publicly said that Trump’s attempts to downplay the pandemic are “disgusting” and “almost criminal."
Trump’s current talking points on the coronavirus also aren’t working, according to a recent poll from the Pew Research Center. The poll, which was conducted earlier this month, found that 57% of those surveyed think that Trump is sending the wrong message.

So how should Trump handle questions about the coronavirus? He should point to his early efforts to shut down air travel and the borders, according to GOP strategist Ron Bonjean.

“Biden has easy sound bites to use against Trump because of the larger number of Covid-related fatalities. That’s why the president should be prepared with a thoughtful counteroffensive showing how Biden’s recommendations wouldn’t have changed the current situation our country is facing," he said.

Earlier in the pandemic, other GOP strategists insisted that Republicans should blame China, and call out Democrats as soft on China. If past is prologue, Trump may very well take that tact: A recent ad touts Trump’s attempts to stem travel from China early in the pandemic, and knocks Biden for criticizing that move.

The health department’s investigative watchdog  is out with a new report highlighting glaring weaknesses in FDA safety systems that are supposed to curb opioid abuse, reports STAT’s Ed Silverman in a new exclusive.

Many of those weaknesses stem from opioid makers themselves: The OIG notes that many manufacturers did not comply in a timely manner with rules that require them to submit certain records to the FDA. Those reports contain critical information used by the FDA to monitor potential opioid abuse, like how often certain opioids were prescribed.

Among OIG’s recommendations: The FDA should fine companies who don’t comply. The FDA, which has never fined a company for not complying with a REMS, agreed. The agency also said it would form an internal working group to explore how it could streamline its compliance process, and that it would consider asking Congress for any additional authorities it may need to make that happen.

STAT stories you may have missed

Republicans blasted Obama’s use of an obscure Medicare law. Now Trump’s using it on $200 drug coupons — and the GOP is silent.
Medical AI systems are disproportionately built with data from just three states, new research finds.
To ensure that Covid-19 vaccines are equally safe and effective for everyone, trial researchers are scrambling to include more participants of color — but worries about inequities run deep.
Gilead to pay $97 million for allegedly using a charity to pay kickbacks to Medicare patients.
Here come the tortoises: In the race for a Covid-19 vaccine, slow starters could still win out.
A layperson’s guide to how — and when — a Covid-19 vaccine could be authorized.
A new analysis contends that public funding contributed up to five times more than what Johnson & Johnson spent to develop its groundbreaking drug for tuberculosis.
Publicado por salud equitativa en 7:53