Is the ending of Tesaro’s story a happy one? 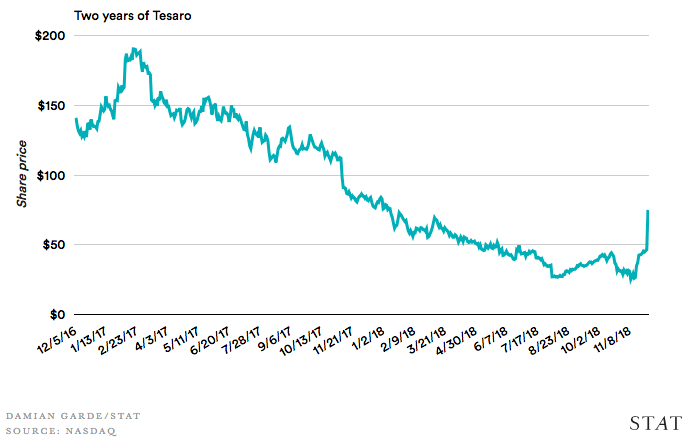 A seldom-seen thing called Merger Monday returned to biotech yesterday with the news that GlaxoSmithKline would pay about $5 billion for the cancer-focused Tesaro. Because dealmaking has been sluggish all year, and biopharma stocks are down, the acquisition was widely received as a reminder that, hey, there can be money in biotech after all.

But are we sure the Tesaro deal should be heartening?

On the one hand, you could argue that it can only be positive when a small biotech company gets bought by a large pharma at a 61 percent premium. But on the other hand, as the chart above indicates, Tesaro’s story didn’t begin in 2018. The company rode out the now familiar biotech hype cycle, in which shares soar on the promise of a product and then gradually erode as the realities of commerce set in.
GSK’s buying price is a premium to Friday, but it's identical to Tesaro's value at the start of the year, and it's a 60 percent discount to the company's peak in 2017.
Publicado por salud equitativa en 5:32