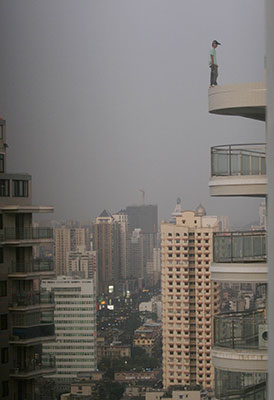 Suicide will claim a life somewhere in the world in the time it takes to read the next paragraph.
Someone, somewhere takes their own life every 40 seconds, amounting to around 800,000 people who die by suicide every year. Most suicides occur in low- and middle-income countries (LMICs) and all age groups are affected. Adults over the age of 70 have the highest rate of suicide, but it is also the second leading cause of death among 15- to 29-year-olds. While suicide is more common in men than women, suicide rates are high among women in some countries, notably India and China.
People who kill themselves by suicide often use a method that’s easily accessible in their environment. In countries where a large proportion of the population depends on farming for a living, for instance, ingesting pesticide is a common way of taking one’s life. Between 1990 and 2007, around 30 percent of global suicides were by pesticide self-poisoning, according to the WHO. In urban areas, jumping from tall buildings is a common means of suicide, and people in LMICs use readily available barbecue charcoal to produce deadly carbon monoxide to end their lives by asphyxiation. Hanging is the second-most used method of suicide, and in places where it’s easy to obtain a gun, suicide by firearm is common.
Once considered a problem of high-income countries, data show that more than three-quarters of all suicides occur in LMICs, and nearly half of them in China and India. But suicide death rates - the percentage of the population that commits suicide - are higher in developed countries, according to available data. Confirming those data is difficult, though. Few LMICs have systems in place to accurately register mortality causes, and even when data are available, the stigma surrounding suicide - and the fact that it’s illegal in some countries - mean it’s often not cited as the cause of death.
“Families in countries like Mozambique are unlikely to report that someone died by suicide because of the stigma involved,” said Dr. Bradley Wagenaar of the University of Washington, the principal investigator on several projects on suicide in Mozambique, supported by the National Institute of Mental Health (NIMH). “Instead, when a relative mysteriously dies, they’ll often blame malaria or an infectious disease.”
Although suicide is often an impulsive event that no one sees coming, many suicide deaths are preventable. Key risk factors include depression or other mental illness, feelings of isolation, experiencing a conflict or disaster, drug or alcohol abuse, and previous suicide attempts.
NIMH Director Dr. Joshua Gordon has made suicide prevention a research priority, and the WHO has included it in its Mental Health Action Plan. With support from Fogarty, NIMH and other NIH institutes, researchers are studying ways to reduce global suicides by: