‘Pregnancies are inferior to pregnant persons’

An abortion doctor explains why women have the right to kill.

0 shares
Share on FacebookShare on Twitter Newsletter
During a US Congressional hearing on federal abortion restrictions, a Twitter exchangebetween a pro-choice doctor and pro-life critics rehearses an old argument for abortion. Commenting on the testimony of abortion survivor Gianna Jessen, Dr Leah Torres declares:

But does this “my body, my choice” line make any more sense now than it ever did? As Ryan Anderson responded in another stoush with Torres:

Logically, the time for choice was when a woman could have said no to sex. (And please don’t tell us that women who are so staunch about killing a child inside them are too weak to resist their men.)
What about the "right to coerce someone's death?" Eric Metaxas asks. Torres doesn’t get it, or pretends not to by talking about adults who are in a position to make decisions. 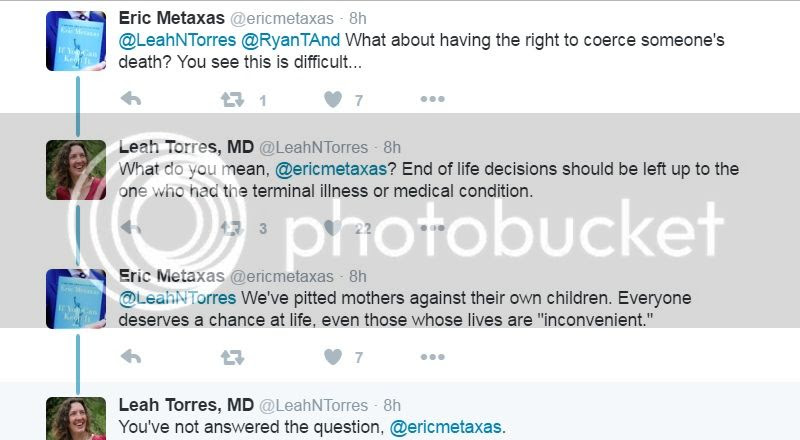 She wants to talk about the “decision” to give birth, which, if negative, means killing the unborn child. Metaxas insists that no-one has the right to kill another person, but she answers:

One can only repeat that the time to make decisions about who or what gets inside your body is when you are deciding whether to have sex. Why doesn’t Torres take a stand about women’s dominion over their bodies at that point?
Why prefer to exercise power over the most vulnerable of human beings – taking care first to depersonalise them as “pregnancies”?
Aaron New asks why the unborn person is inferior:

In other words, since this person is dependent on me, I have the power to end its life. Dependency makes you a lesser (human?) being.
This, by the way, is an argument that now applies at the other end of life: since this terminally, ill, disabled or demented person is dependent on me/society, his or her life is inferior to mine/ours and can be terminated.
This is ugly power, but it is jealously guarded and even championed by a vocal minority of women, their flag-bearer these days the would-be president Hillary Clinton.
Carolyn Moynihan is Deputy Editor of MercatorNet.

Mention the name John Milton and most of us will probably think of his famous poems Paradise Lost and On His Blindness, rather than his political pamphlet, Areopagitica. But that passionate defence of free speech -- written all the way back in 1644 when the English parliament brought in book censorship -- was what Campbell Markham thought of when he wanted to explain why he is opposed to religious organisations having an exemption from anti-discrimination law in Tasmania, the state where he resides.
Now, if Mr Markham were the Richard Dawkins of Australia, that would not be at all surprising. But he is not. He is a devout Presbyterian minister who feels offended when religion is mocked, and grieved when he is accused of bigotry for opposing gay marriage. Still, he has publicly opposed the state Attorney-General's proposal to allow speech which might (and in some quarters definitely does) give offence, when it is "for religious purposes". To understand why, read his fine article.