Most research using foetal tissue focuses on infectious diseases
by Michael Cook | 12 Dec 2015 | 2 comments
Foetal tissue research has featured prominently in headlines this year, after an anti-abortion activist group filmed Planned Parenthood officials talking about sales of foetal parts to researchers. Their videos created a huge political controversy and, at a Colorado clinic, a gunman shot dead three people. Although he is not very coherent, he reportedly told police “no more baby parts”.

But less is known about what the scientists do with the tissue. A journalist for Nature, Meredith Wadman, combed through a National Institutes of Health database of research grants funded in 2014 to identify those which used foetal tissue. She found that the NIH had funded 164 of these projects, at a cost of US$76 million. This is only 0.27% of its grants.

Supporters of the research argue that the use of foetal tissue is legal, that it would otherwise be destroyed, and that it has helped to achieve significant medical advances. If they had other sources, they would use them, scientists said.

Here is what Nature found: 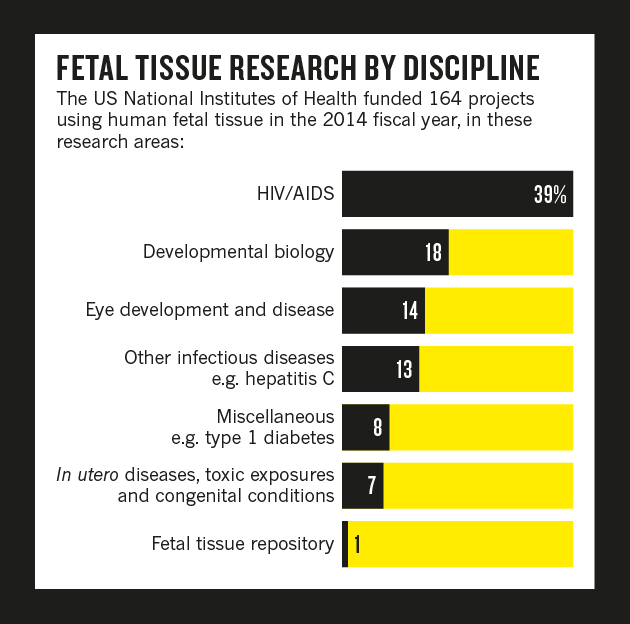 Now that Australian euthanasia activist Philip Nitschke has burned his medical registration rather than give up promoting the right to die, he is tackling his Big Idea: rational suicide.
He is planning to hold a seminar in Melbourne next September to show that people do not have to be depressed or terminally ill to want to die. “The reality is, a portion of our population will suicide and I don’t think we should make it so hard,” Nitschke told The Guardian. He believes that bereaved spouses, long-term prisoners, and all old people should have access to lethal medications so that they can kill themselves.
Australia’s National Mental Health Commissioner, Professor Ian Hickie was appalled by Nitschke’s remarks and spoke out with unusual frankness:
“Nitschke has no understanding of mental health and related issues, and absolutely no empathy. He has demonstrated a lack of humanity and a lack of concern for those who find themselves in these situations and their families, and a complete lack of compassion for those who are socially isolated and trying to connect with their world. I find it a totally unacceptable and appalling idea that age is a proxy for the end of your useful life. To reinforce that is an abhorrent idea.”
However, Nitschke has raised – or rather revived, for the Greeks and Romans discussed the same topic – a good question. If life is really a good, can it ever be rational to take it? If it is not unconditionally good, why can’t we take it? What gives life any value? I can’t say that I have ever admired Nitschke’s ideas or his work, but without people like him, would we be asking these big questions?

Should high school football be banned?
by Michael Cook | Dec 12, 2015
Experts say that the risk of serious disability from concussion is too great.

Somerville vs Savulescu on gene editing
by Michael Cook | Dec 12, 2015
Two prominent bioethicists debate the leading issue of the day