Two historical milestones of the March for life in the US: ten of thousands of students and unprecedented Presidential speech 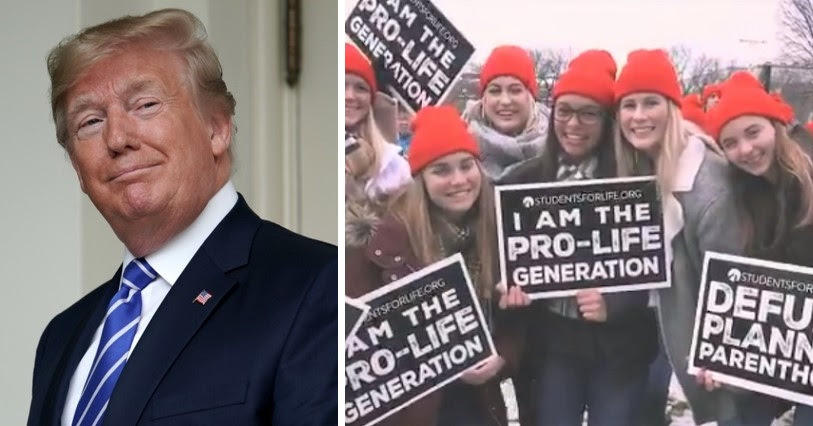 Last Friday, Washington was the scene of a march for life that marked a milestone without precedents in the 47 consecutive years of this demonstration:
Below is a transcript of some of what we consider the most interesting and valuable points in President Trump’s speech, owing to their relevance in the field of bioethics, and more particularly in the categorical defense of the unborn.

Your generation is making America the pro-family, pro-life nation

The President: “I want to welcome tens of thousands — this is a tremendous turnout — tens of thousands of high school and college students who took long bus rides to be here in our nation’s capital.  And to make you feel even better, there are tens of thousands of people outside that we passed on the way in.  If anyone would like to give up their spot, we can work that out.  You have a tremendous group of people outside.  Thousands and thousands wanted to get in.  This is some great success. Young people are the heart of the March for Life, and it’s your generation that is making America the pro-family, pro-life nation.”
“The life movement is led by strong women, amazing faith leaders, and brave students who carry on the legacy of pioneers before us who fought to raise the conscience of our nation and uphold the rights of our citizens.  You embrace mothers with care and compassion.  You are powered by prayer, and motivated by pure, unselfish love.”

Every child is a precious and sacred gift from God

Trump continued to manifest the values he defends and tries to apply in his government.
“All of us here today understand an eternal truth: Every child is a precious and sacred gift from God.  Together, we must protect, cherish, and defend the dignity and sanctity of every human life.
When we see the image of a baby in the womb, we glimpse the majesty of God’s creation.  When we hold a newborn in our arms, we know the endless love that each child brings to a family.  When we watch a child grow, we see the splendor that radiates from each human soul.  One life changes the world.  From my family — and I can tell you, I send love and I send great, great love.”
Then Trump focused his speech on the achievements of his government in this field that we mentioned in a recent article, see HERE.

Every person is worth protecting

The President finished his fiery speech with these significant words.
“Every person is worth protecting.  (Applause.)  And above all, we know that every human soul is divine, and every human life –- born and unborn –- is made in the holy image of Almighty God. (Applause.)
Together, we will defend this truth all across our magnificent land.  We will set free the dreams of our people. And with determined hope, we look forward to all of the blessings that will come from the beauty, talent, purpose, nobility, and grace of every American child.”

A fight that is changing America to a pro-life Nation
From our Observatory, we are following the evolution of public opinion in the U.S. on the issue of abortion. We quoted an article we published in 2016 “better part of almost three decades, public opinion polling has consistently shown an increase of Americans opposed to elective abortions”. Two opposing positions divide public opinion: pro-choice and pro-life. Both have a political projection that has played a decisive role in many presidential elections, and indeed analysts have said that the current President, Donald Trump, arrived at the White House thanks in large part to the support of pro-life movements. In this respect, the current Administration has taken measures and presented many bills defending the nasciturus (see HERE the last 5 articles on this matter). Some measures implemented during Trump’s Administration: barred federal funds (see Washington Post, January 24, 2017) from organizations that promote abortion around the world severe restrictions in the research with aborted fetal tissues allow conscientious objection of medical professionals and institutions. measures protecting pro-life students’ right to free speech in their colleges. “Heartbeat bills laws”, which ban abortion at six weeks, became law in Georgia, Kentucky, Ohio, and Mississippi. Alabama banned abortion outright. The next step appears to be definitive: re-election or not Today an article published in The Guardian (UK) affirms, “In the coming year, the anti-abortion president, Donald Trump, faces re-election, and a conservative supreme court will take up its first abortion case, with potentially far-reaching consequences for a woman’s right to choose in America.” “Abortion is also a repeat topic in Trump’s speech, his rhetoric often goes beyond what even the anti-abortion movement could have hoped for from past Republican candidates”, the author says. But pro-choice activists are also continuing to fight, with protestor Loretta Ross declaring that, “We just have to keep on fighting the same way black people have to keep on fighting for voting rights for 400 years.” The article concludes that “Supporters and activists on both sides of the divide – pro-choice and anti-abortion – are braced for a titanic fight that could change the face of abortion access in the States.” Our Observatory welcomes the progress made in defense of the unborn, thanks to the awareness and courage of many Americans.
Publicado por salud equitativa en 3:57