By Angela Betsaida B. Laguipo, BSNJan 30 2020
The Wuhan coronavirus or the 2019-nCoV or novel coronavirus is a new human-infecting coronavirus genetically different from human SARS (Severe Acute Respiratory Syndrome), and MERS-CoV (Middle East Respiratory Syndrome), a team of scientists has found.
In a new study published in The Lancet, researchers have revealed that the virus likely emerged very recently and was detected rapidly, using the same molecular doorway as SARS to enter humans. However, the researchers noted that the new coronavirus strain was genetically different from human SARS, which killed more than 348 people in China in 2003, and the MERS-CoV that emerged in the Middle East in 2012. 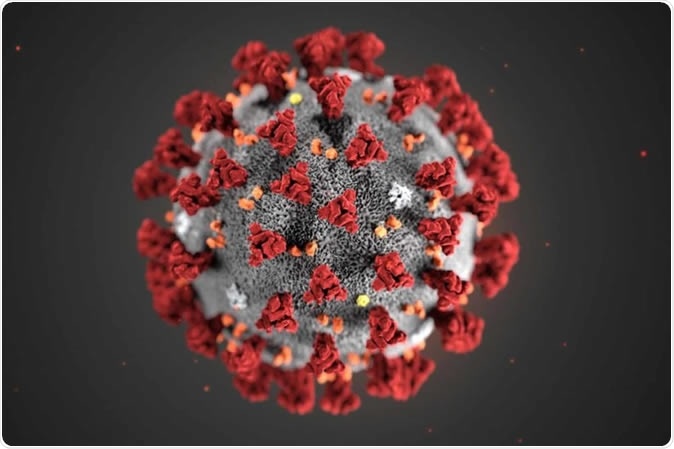 An illustration from the Centers for Disease Control and Prevention reveals the basic form of the virus blamed for the outbreak of respiratory illness first detected in Wuhan, China. (Illustration/Alissa Eckert and Dan Higgins, CDC)

The authors said that while their analysis shows that bats might be the source of the new virus, which is sold in the market, they may also represent an intermediate host that enables the virus to hop from animals to humans. Hence, it’s crucial for further investigation on the capability of the virus to evolve, adapt, and spread in the future.
The team derived samples from bronchoalveolar lavage fluid and cultured isolates from nine patients, eight of whom had visited the Huanan seafood market in Wuhan City, where the virus originated. These patients developed pneumonia of an unidentified cause. One patient never visited the market but stayed in a hotel nearby before the symptoms manifested.
The researchers analyzed the samples to determine the origin of the virus and how it was able to jump from animals to humans. The study findings show that the 2019-nCoV were present in all 10 genetic samples obtained from the patients, including eight complete genomes, and two partial genomes.

Further, all ten genome sequences were very similar, with 99.98 percent sequence identity, indicating a very recent emergence of the virus into humans. Also, the 2019-nCoV was closely related to two bat-derived SARS-like coronaviruses, the bat-SL-CoVZXC21, and bat-SL-CoVZC45, which shared 88% of the genetic sequence. These strain samples were collected in 2018 from Zhoushan, eastern China.
However, the scientists found that the current coronavirus strain samples were more distant from SARS-CoV and the MERS-CoV, with 79 percent and 50 percent identity, respectively.

The study findings unveiled that the Wuhan coronavirus fell within the subgenus Sarbecovirus of the genus Betacoronavirus, mostly similar to its closest relatives, the bat-derived coronaviruses, and genetically distinct from the human SARS. But the Wuhan coronavirus has a similar receptor-binding domain structure to that of human SARS, which means the virus utilizes the same molecular doorway as SARS to enter human cells.
"It is striking that the sequences of 2019-nCoV described here from different patients were almost identical. This finding suggests that 2019-nCoV originated from one source within a very short period and was detected relatively rapidly. However, as the virus transmits to more individuals, constant surveillance of mutations arising is needed," Professor Weifeng Shi, Key Laboratory of Etiology and Epidemiology of Emerging Infectious Diseases in Universities of Shandong, Shandong First Medical University and Shandong Academy of Medical Sciences, China, said in a statement.

Based on the evidence and study findings, the team believes that the Wuhan coronavirus more likely came from bats and transmitted to humans through a currently unknown wild animal sold at the Huanan seafood market.
What’s more, the scientists think that the coronaviruses form bats are mutating than the 2019-nCoV, which means that the virus is less likely to have emerged because of a chance mutation. Still, further research and more information are needed to determine the exact source of the virus and how it jumped from the animal to humans.
“These data are consistent with a bat reservoir for coronaviruses in general and 2019-nCoV in particular. However, despite the importance of bats, it seems likely that another animal host is acting as an intermediate host between bats and humans," Professor Guizhen Wu, Chinese Center for Disease Control and Prevention, said.
She believes that though bats are the likely original host of the virus, there might be an intermediate host of the virus, between bats and humans. She noted that the first surge of coronavirus cases started late in December 2019, a period when most of the bat species are hibernating. Also, she emphasized that before the outbreak, there were no bats sold or found in the Huanan seafood market, while many mammals and other non-aquatic animals were sold.
Prof. Wu said that the genetic sequences between the Wuhan coronavirus and its close relatives, the bat-derived coronaviruses, were less than 90 percent, which means that these viruses are not direct ancestors of the novel coronavirus that has killed over 160 people and infected nearly 8,000 people in China, spreading to more than a dozen countries across the globe.
Lastly, in both the MERS and SARS infections, bats served as the natural reservoir, with another animal acting as an intermediate host. Therefore, she said that a wild animal might have acted as a hidden virus reservoir, posing threat to human populations.
Journal reference:
Genomic characterisation and epidemiology of 2019 novel coronavirus: implications for virus origins and receptor binding Lu, Roujian et al. The Lancet, https://www.thelancet.com/journals/lancet/article/PIIS0140-6736(20)30251-8/fulltext
Publicado por salud equitativa en 7:48