Violence at an abortion clinic

Violence at an abortion clinic


Violence at an abortion clinic 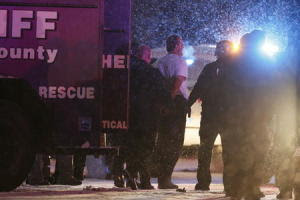 A shooter with a gun thrust Planned Parenthood into the spotlight.

Human lives are ended every day in abortion clinics. Millions of them every year. Whole populations of human beings have been deprived of life every year for decades because of abortion, various types of procedures that did some sort of violence to the most vulnerable young lives in the womb. Silently and out of sight. And over four decades of these daily ‘terminations’, made legal by judges and more acceptable by Planned Parenthood’s considerable PR and marketing resources, the pro-life movement has just as resolutely and steadfastly worked to make pregnancy under any circumstances more bearable by offering every assistance a frightened mother (every pregnant woman is already a mother) needs. And to show and tell the harm to women, men, families and society when the ultimate harm to innocent human life is done on purpose and under false pretenses.

Sometimes I see the recurrent sign on social media saying something like ‘Would abortion bother us more if they used guns?’ Of course that’s both uncomfortably challenging to a culture that doesn’t tolerate being uncomfortable with challenges, and ineffective, because the culture is so desensitized to what abortion is and does and means to, well, the culture.

But while the abortion industry has continued to enjoy its political backing, the pro-life movement has continued to grow, offering women a true choice, for their own thriving and the good of their children.

Then the undercover videos emerged, released over time by the Center for Medical Progress. Congress called for an investigation of Planned Parenthood and government (taxpayer) funding. Pro-life groups highlighted what the videos starkly showed, what goes on in the abortion industry out of sight or mind, not only ending small, vulnerable human lives but marketing their body parts. Planned Parenthood cried foul, claiming the videos misrepresented what they did, and they were being unfairly treated.

Then came last Friday’s shooting in Colorado, at a Planned Parenthood clinic.

While it was still an active shooting scene, with nothing known but the location, pro-life leaders were quick to denounce violence and call for respectful restraint. Bryan Kemper, Youth Director at Priest for Life, was quick to say this:


“Although we do not know the details behind the gun violence at Planned Parenthood in Colorado, it is important to say that we are against all violence against our fellow human persons. From the abortionist, the workers, the patients, the children scheduled to die or anyone at that Planned Parenthood, all of their lives are precious and worth saving. All of them are loved by God and deserve our prayers. I am sickened by the violence there today just as I am sickened by the violence there every day.”
Susan B. Anthony List President Marjorie Dannenfelser said this:


“We strongly condemn the violence carried out at Planned Parenthood. Our condolences and heartfelt prayers go out to the victims and their families.
“Violence is never justified. The actions of the shooter are in complete contradiction to the aims of the pro-life movement. Public policy debates regarding abortion – including defunding abortion businesses and protecting women and children from late term abortion – can and should continue to be discussed calmly, with conviction and civility.
It was a pro-life police officer who raced to the scene to save lives.


Garrett Swasey, 44, the University of Colorado Colorado Springs police officer who was shot and killed while responding to a shooting at a Planned Parenthood office, was described by his fellow church members and friends as a courageous man and loving father…
Dannenfelser added


“Officer Garrett Swasey embodies the spirit of the pro-life movement in this tragedy. He may not have agreed with Planned Parenthood, but Officer Swasey charged headfirst into danger to protect lives inside their clinic.  He believed, as we do, that all lives are equally valuable and worthy of protection.”
Then Planned Parenthood quickly reacted by blaming the pro-life movement for ‘domestic terrorism‘. And Christians.


The fact is that the pro-life movement is an overwhelmingly peaceful movement, despite our profound and deep objection to abortion on demand and despite the deplorable practices of Planned Parenthood. As blogger Matt Walsh noted, “Interesting fact: Planned Parenthood kills 100 times more people in a day than alleged ‘anti abortion extremists’ have killed in 40 years.”
As for those “anti-abortion extremists,” their actions have been condemned by all major pro-life groups as well as by all major Christian leaders involved in the pro-life movement, since, by murdering another human being, they violate the very spirit of being “pro-life.”…
That’s why it was no surprise to learn that the alleged shooter in last week’s tragic attack was completely unknown to the pro-life movement…
In fact, who was that shooter?


…the picture emerging of the man who allegedly opened fire at a Planned Parenthood facility Friday is one of a deeply disturbed recluse who, though opposed to abortion, had little interest in and no known history of active involvement in the abortion debate, with a long spate of run-ins with the law and a pattern of bizarre behavior that left some of those who encountered him fearful for their safety, and many convinced that he wasn’t in his right mind…
“You know how whenever someone goes crazy, the neighbors say he was so quiet and normal. That wasn’t the case here. He was weird. Everyone kept an eye on him.”
“He was really tightly wound,” said another resident. “You could see that from the stress on his face, from the way he acted.”
Still another went even further, telling the Post, “He was just always saying, ‘I know the U.S. is trying to kill everybody’ and do this and do that. He [said he] was an undercover [agent]. Just craziness. Just pure, right-out craziness all the time.
However, take note of this part of that story:


One anonymous source, reportedly with the police, told the Washington Post that in a confusing rant following his arrest Dear did make mention of “baby body parts,” suggesting some connection with the recent series of undercover videos showing Planned Parenthood staffers harvesting and selling the body parts of aborted babies.
However, the source added that this was but one topic among many mentioned by Dear in a speech that left investigators unclear as to his specific motivation.
Planned Parenthood has issued a statement saying that based upon eyewitnesses they believe Dear “was motivated by opposition to safe and legal abortion.”
So, attributing this to an “anonymous source” is questionable enough. But how did a clearly out of touch recluse who “spent some of his time living in a cabin in the woods in North Carolina, without running water or electricity” even hear anything about Planned Parenthood videos, or “baby body parts”?

But meanwhile, the effort to defund Planned Parenthood continues, and to shift federal funds to community health centers that provide life-saving health care for women, men and children.
- See more at: http://www.mercatornet.com/sheila_liaugminas/view/violence-at-an-abortion-clinic/17281#sthash.ev0xGbux.dpuf

While our lead story today will be of greatest interest to Australian readers, there is a lesson in it for every country where same-sex marriage is or will be legal.
The people most at risk under this regime are not adults, who are unlikely to be affected by the change in the law. It is school children, who will henceforth be educated to believe that sex is basically a recreational activity. At least that is the theme of an anti-bullying campaign being rolled out in many Australian schools with generous Federal Government funding.
No doubt similar programs are being implemented in other countries. We'd love to hear from readers about their experiences.