CDC Report Shows Costs of Fatal Injuries for States in 2014 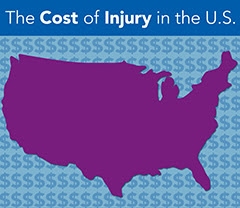 Injuries created a significant economic burden on states in 2014, according to a Morbidity and Mortality Weekly Reports (MMWR)released today by the Centers for Disease Control and Prevention (CDC). The report is the first study on the state-level economic burdens of injuries. Numbers and rates of fatal injuries, lifetime (medical and work-loss) costs, and lifetime costs per capita were calculated for each of the 50 states and the District of Columbia (DC) and for unintentional injuries and violence, including suicide and homicide.
Key Findings
Increasing Incidence and Economic Burden of Injuries Call for Effective Prevention Strategies
The total lifetime medical and work loss costs of fatal injuries in the United States was $214 billion in 2013. From 2005 to 2014, the number of unintentional fatal injuries increased from 117,809 to 136,053 and unintentional injury moved up from the 5th to the 4th leading cause of death. Similarly, the number of suicides rose from 32,637 to 42,773 and suicide moved from the 11th to the 10th leading cause of death.
The Injury Center empowers and equips states with the resources and information to address the most pressing injury and violence issues including prescription drug overdose, child abuse and neglect, traumatic brain injury, motor vehicle crash injury, suicide, and intimate partner/sexual violence. Visit our funded programs web page to learn how the Injury Center works with states to help implement and promote life- and cost-saving injury and violence interventions.
Learn More
Publicado por salud equitativa en 8:21