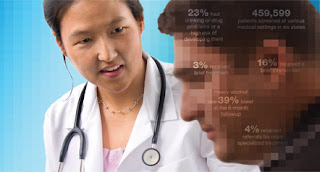 The idea behind SAMHSA’s Screening, Brief Intervention, and Referral to Treatment (SBIRT) program is deceptively simple: What if you could stop drinking and substance abuse problems before they became serious enough to destroy people’s lives?

Now SAMHSA’s grantees are providing SBIRT services in an ever-growing list of venues. To ensure that the approach endures long after the grants end, the program is expanding to include the next generation of service providers through a new medical residency grant program. (See “Creating a Curriculum: Educating the Next Generation.”) And the field is amassing even more evidence that the SBIRT approach is an effective way to reduce alcohol and illicit drug use—and save money.

“Promoting services like SBIRT to all parts of the Nation is a crucial part of SAMHSA’s mission to reach everyone struggling with substance abuse issues,” said H. Westley Clark, M.D., J.D., M.P.H., Director of SAMHSA’s Center for Substance Abuse Treatment (CSAT).

Reaching New Populations
The basics of SBIRT are the same no matter where the services are provided. All patients in participating emergency rooms, primary health clinics, campus health centers, or other health care venues automatically undergo a quick screening to assess their alcohol and drug use. If they’re at risk of developing a serious problem, they receive a brief intervention that focuses on raising their awareness of substance abuse and motivating them to change their behavior. Patients who need more extensive treatment receive referrals to specialty care. (See “Screening Works: Update from the Field,” SAMHSA News online, March/April 2008.)

CSAT’s goal is to help spread the approach throughout the entire health system. A grant program that ended last year, for instance, brought SBIRT to a dozen community college and university campuses around the country.

The nine state and tribal grantees currently providing SBIRT services are branching into new venues. In Colorado, for instance, a grantee is now bringing the SBIRT approach to HIV clinics (see “Normalizing Alcohol and Drug Screening in Colorado”). Another project with Alaska Natives involves taking SBIRT to areas so remote they can only be reached by boat or airplane (see “Reaching an Isolated Population”).

To help ensure SBIRT’s sustainability, CSAT also has launched a medical residency grant program (see “Creating a Curriculum: Educating the Next Generation.”). These grantees are developing a variety of tools for training medical residents, including lectures, Web-based programs with streaming video illustrations, and practice with standardized “patients.”

“These are the next generation of providers,” explained Project Director Walker Reed Forman, M.S.W., the Lead Public Health Advisor in CSAT’s Division of Services Improvement. “Research shows that when you learn something at an early point in your career, you’re more likely to adopt it once you’re out in the wider medical community.”

Proving SBIRT’s Effectiveness
A growing body of evidence about SBIRT’s effectiveness—and cost-effectiveness—could help SBIRT to expand even more. That research shows that SBIRT is an effective way to reduce drinking and substance abuse problems.

A 2009 article in the journal Drug and Alcohol Dependence, for example, found an almost 68-percent reduction in illicit drug use over a 6-month period among people who had received SBIRT services.

The report’s authors include Dr. Clark and other SAMHSA staff; Bertha Madras, Ph.D., former Deputy Director for Demand Reduction at the Office of National Drug Control Policy; and Wilson Compton, M.D., M.P.E., Director of the Division of Epidemiology, Services, and Prevention Research at the National Institute on Drug Abuse.

The researchers reviewed data on 459,599 patients screened at various medical settings in six states. Almost 23 percent had drinking or drug problems or a high risk of developing them. Of those patients, almost 16 percent received a brief intervention; 3 percent received brief treatment; and almost 4 percent received referrals for more specialized treatment.

In addition to significantly reducing illicit drug use, SBIRT also reduced individuals’ drinking. Among those who reported heavy drinking at baseline, the rate of heavy alcohol use was almost 39 percent lower at the 6-month followup.

Showing Cost-Effectiveness
SBIRT can also save money, other research suggests.

In one CSAT-funded study, for instance, the Washington State SBIRT grantee examined the approach’s impact on Medicaid costs for emergency room patients.

Researchers in the state’s Department of Social and Health Services compared changes in costs for 1,315 disabled Medicaid recipients who received at least a brief intervention through the Washington SBIRT project and 8,972 who did not.

The reduction in total Medicaid costs after receiving the intervention was $185 to $192 per person per month, the researchers found. The lowered costs came mostly from declines in inpatient hospitalizations.

Although some modest costs are associated with providing SBIRT services, the researchers estimated that the state could potentially save up to $2.8 million a year by continuing to provide SBIRT services to working-age disabled patients.

Educating Providers
Some challenges remain, including reimbursement for SBIRT services.

Not all providers may be aware that there are now billing codes that can allow them to receive reimbursement for providing SBIRT, explained Mr. Forman.

“We’re going to expand our efforts to educate providers on the funding support for doing SBIRT,” said Mr. Forman. CSAT is planning a summit on financing policy in 2010, for example, which will educate state policymakers and health care decisionmakers about the codes and how to use them.

Medicaid codes are a different story, Mr. Forman added. “Each state has to review the use of the SBIRT code, review it against their budget, and make a decision about whether they’ll adopt it,” he explained. Although a few states have already adopted the Medicaid codes, the vast majority have not. “That’s a little more difficult road to travel,” he said.

For colleges and universities [http://www.sbirt.samhsa.gov/colleges_resources.htm]