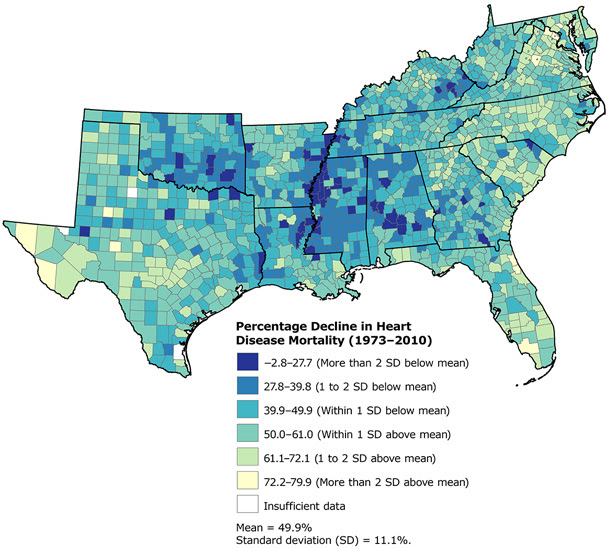 [High-resolution JPG for print]
Data source: National Center for Health Statistics. [A text description of this map is also available.]
Top of Page

Our analysis was limited to 1,420 counties in the South US Census Region. The annual number of county-level heart disease deaths from 1973 to 2010 among people aged 35 years or older was obtained from the National Center for Health Statistics (NCHS). Heart disease deaths were defined according to the following International Classification of Diseases (ICD) codes: ICD-8: 390–398, 402, 404, 410–429; ICD-9: 390–398, 402, 404–429; ICD-10: I00–I09, I11, I13, I20–I51. County-level population estimates were also obtained from the NCHS Centers for Disease Control and Prevention (CDC) WONDER database. These data were sequentially 1) aggregated into 2-year intervals, 2) age-standardized (using the 2000 US standard population), and 3) spatially smoothed using Bayesian methods, with the first and third steps enhancing rate stability of counties with small populations (3). Only counties with 2-year populations greater than 1,000 at all intervals were included.
These stabilized, age-standardized, biennial county-level heart disease death rates were modeled using a spatially independent Poisson generalized linear mixed model with a fixed intercept and temporal slope and county-level random intercept and temporal slope using SAS version 9.3 (SAS Institute, Inc) (4). The assumed log-linear trend was verified using joinpoint regression (Joinpoint Regression Program version 4.0.4, National Cancer Institute). Given this model, county-level temporal changes (ie, percentage declines) in heart disease death rates were summarized as the exponentiated linear combination of the fixed and random slopes. The resulting county-level percentage declines in heart disease death rates (1973–2010) were mapped (ArcMap, ESRI), with categories defined according to the mean and standard deviation.
Top of Page

This map illustrates substantial geographic disparities in declining heart disease death rates in the South from 1973 to 2010. Although the mean county-level percentage decline in heart disease mortality was 49.9% (standard deviation, 11.1%), the magnitude of change varied among counties from a decline of 79.9% to an increase of 2.8%. The largest declines were concentrated in central and west Texas and the Atlantic Coast, and the smallest declines were observed in counties along the Mississippi River, eastern Kentucky, and parts of Oklahoma and Alabama.
Top of Page

This research was supported in part by appointments for Dr Kramer and Mr Vaughan to the CDC Research Participation Program administered by the Oak Ridge Institute for Science and Education through an interagency agreement between the US Department of Energy and CDC. Dr Kramer was also supported by the Eunice Kennedy Shriver National Institute of Child Health and Human Development of the NIH under award no. K01HD074726.
Top of Page