Can pensioners live in student halls?

Bringing (unrelated) old and young together under one roof is an idea gaining traction. 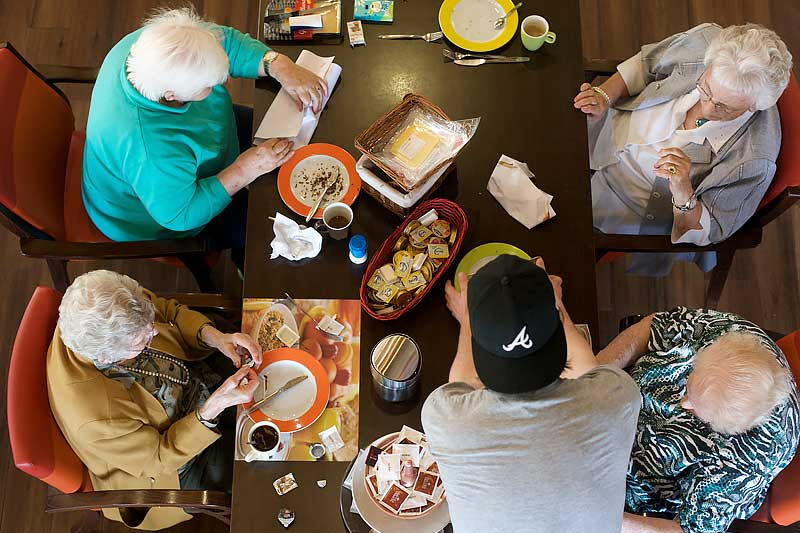 Students already live in a Dutch retirement village. Image: Humanitas Deventer
Imagine a retirement home, which also doubles-up as student accommodation. It’s one of the ideas given an outing by a think-tank which, like the Home Renaissance Foundation, cheers on the virtues of inter-generational living.
The think-tank is called United for All Ages and its report warns – a little histrionically – that something must be done to stop a type of ‘apartheid’ opening up between old and young.
In a report published this week, the organisation squarely fingers the housing shortage as the biggest reason for this growing gulf between ages. It argues that the elderly are increasingly ‘zoned’; living in a type of property or area where mixing with people of other generations becomes difficult.
To prove this point the think-tank has commissioned a survey which purports to demonstrate that the average Briton has 56 per cent fewer interactions with people they would mix with if people of all ages were allowed to mix randomly, without self-segregating. That figure does not include family contact, but even so it does sound worryingly high.
On one level we ought to acknowledge that such a shocking statistic is, at least partly, a product of the natural impulse to share time with people whom we understand. As someone now in her 50s, I increasingly find the cultural touchstones of younger generations abstruse. It helps that I’m a mother – and in time, God willing, a grandmother – because our children help us understand the language, humour, hopes and fears of those coming along after us.
But a growing number of men and women are childless, and do not have that umbilical connection with the values of a younger cohort of humanity. And there are many people who simply find it less hard work to get on with contemporaries, rather than folk who require almost every conversational exchange to come with an explanatory footnote.
But the United for All Ages report identifies the evolution of something less organic. It says the young, in increasing numbers, live in cheaper, urban areas. The older generation – typically their parents and/or grandparents – are living in the suburbs or countryside.
The reason for this is well documented. The effect is what should worry us. The extent to which young and old fail to mix. When that happens society is the poorer. The old do not impart to the young the widsom of their experience, the young do not energise jaded oldsters with the vigour of their youth and idealism.
But what to do. The Home Renaissance Foundation has published research looking at how architecture can create homes where old and young, parents and children, co-habit whilst retaining shared and independent living spaces. Houses built around a communal courtyard are but one – excellent – example. Others include town houses where the ground floor is for older residents, while the upper storeys are for the next generation. Walls can be taken down easily, as family composition evolves.
United for All Ages takes those ideas on a couple of steps. They are not necessarily likely to happen, but they represent the kind of imaginative proposals which will get people musing on the seriousness of the problem.
So we end up with a plan to create university halls of residence which can be shared by students and pensioners (who may just occasionally be both). Some people will raise their hands in horror at the thought of highly-strung and noisy undergraduates sharing a living space with grannies. The former would be getting up as the latter would be going to bed etc.
But this is to miss the point. We are, increasingly, living in a world where the old and young cannot imagine sharing a space. And that has to be wrong.
Other proposals from this welcome think-tank include using care homes to provide nursery facilities. Studies show the beneficial effects of elderly residents coming into regular contact with children, and care homes – suitably modified – could offer the parking and dining facilities which both eldercare and childcare businesses require.
And another idea floats the notion of home-share schemes in which younger people live with older folk – offering limited care services, in return for reduced rent. It is facile to pick at the hem of these ideas. Obviously, they are fraught with problems about their practical applications. But the alternative, where our generations continue to move apart, also carries risk.
Joanna Roughton is the editor of BeHome, a blog of The Home Renaissance Foundation. Republished with permission.

Life gets complicated for feminists. Not only do they have to contend with long-standing tensions between black and white, straight and gay; they now have transgender claimants to the title and pro-lifers lining up to join their Women's March on Washington. Of course, if you are going to put "women" in the title of your thing, you have to expect all comers, and let them wear their t-shirt as well.
The organisers of Saturday's anti-Trump march (with Planned Parenthood breathing down their necks) do not want to do that, but even the progressive media can see that they have a problem justifying their exclusion of a feminist pro-life group. Sheila Liaugminas and myself have both written about this today.