Missed the last e-News? Read it on the HCUP-US Web site

New Community-Level Statistics on HCUPnet on Stays for Alcohol and Other Drugs
Hospital stays involving alcohol, opioids, stimulants and other drugs are now available as new county- and region-level statistics on HCUPnet. This new resource includes 32 participating States for years 2013 and 2014 by total number of discharges and as a rate per 100,000 population. Statistics can be distinguished by several variables, including age group, sex, payer and type of stay, and by hospital costs/charges and lengths of stay.
To start your search, navigate to the HCUPnet starting page, click on “Create a New Analysis.” You should then go through the following steps:
An example query for Cook County, IL below shows an opioid-related hospitalization rate of 440 per 100,000 people in 2014. By contrast, Starr County, TX, had a rate for opioid-related hospitalizations of 18 per 100,000 people (not shown). 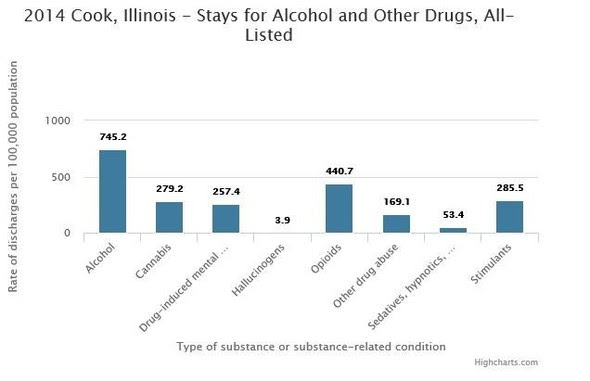 For questions or comments regarding HCUPnet, please contact HCUP@ahrq.gov.
Learn About HCUP at April 18 and 25 Webinars—Registration Required
1-hour Webinars introducing and explaining HCUP will be held on April 18 and 25. On April 18, Overview of the HCUP Databases will cover an introduction to the HCUP family of databases. On April 25, Overview of the HCUP Products and Tools will cover the use of HCUP software tools and supplemental files to facilitate and augment research.
The webinars are open to the public. Each requires separate advance registration, which will open on April 11. Additional details on the webinars are posted on the HCUP Workshops and Webinars page.
Newly Released: HCUP Tools Loading Tutorial
HCUP Tools, when applied to HCUP databases or other administrative data sets, systematically create new data elements from existing data and enhance a researcher’s ability to conduct analyses.
Following the transition to the International Classification of Diseases, Tenth Revision, Clinical Modification/Procedure Coding System (ICD-10-CM/PCS) on October 1, 2015, the HCUP Tools are no longer preloaded onto HCUP databases. To assist researchers, AHRQ has released the HCUP Tools Loading Tutorial, which provides a step-by-step guide to locating, downloading, and applying HCUP Tools to HCUP’s administrative databases. The tutorial also shows users how to verify that the most up-to-date version of HCUP Tools is being used.
Additional information also is provided within a separate announcement in the HCUP Q&A section of this newsletter.
Now Available: The 2015 Nationwide Emergency Department Sample (NEDS)
The 2015 Nationwide Emergency Department Sample (NEDS) is now available. The NEDS is the largest all-payer emergency department database in the United States and contains information about geographic, hospital, patient, and visit characteristics. Unweighted, it contains data from approximately 31 million emergency department (ED) visits each year. Weighted, it estimates roughly 143 million ED visits.
Because of the transition to ICD-10-CM/PCS on October 1, 2015, the file structure and the location of many of the data elements within the files that constitute the 2015 NEDS have changed. Users are encouraged to review the ICD-10-CM/PCS Resources Page prior to analyzing outcomes affected by this change in the ICD coding scheme.
The NEDS enables analyses of ED utilization patterns and yields information that supports public health professionals, administrators, policymakers, and clinicians as they make decisions regarding this critical source of care.
The 2015 NEDS is available for purchase through the HCUP Central Distributor.
HCUP’s 2017 Outstanding Article of the Year Award
Applications currently are being reviewed for HCUP’s Outstanding Article of the Year Award, which will recognize two researchers published in peer-reviewed journals in 2017 who used HCUP databases to explore and address health care research topics and issues.
The chosen recipients will receive certificates and present posters of their work during AcademyHealth’s 2018 Annual Research Meeting on June 24–26 in Seattle. AHRQ will contact the winning authors via email by Friday, April 20, 2018.
For more information on the award and past recipients, please visit the HCUP User Support (HCUP-US) Web site at https://www.hcup-us.ahrq.gov/news/awards.jsp.

Recently Released: 2015 and 2016 State Databases
Since December 2017, the following State databases have been released:
Complete listings of available databases by year can be found in the Database Catalog on the HCUP-US Web site. Databases can be purchased online through the HCUP Central Distributor, and aggregated national and selected State statistics can be accessed via HCUPnet.
For database purchasing questions, please contact the HCUP Central Distributor.

New HCUP Statistical Briefs Posted on HCUP-US
Since December 2017, the following HCUP Statistical Briefs have been released:
To access these and other Statistical Briefs, please visit the Statistical Briefs page on the HCUP-US Web site.
New HCUP Methods Series Report Now Available
Since December 2017, the following Methods Series Report has been released:
Method Series Report #2017-05: User Guide: An Examination of Expected Payer Coding in HCUP Databases (Updated for 2015 HCUP Data) informs HCUP data users about expected payer codes by (1) presenting detailed information about the expected payer codes collected by HCUP States, (2) suggesting how these payer codes can be used for research purposes, and (3) examining the extent to which HCUP data capture discharges covered by these payers in comparison with other national data sources.
This report and other HCUP reports can be found on the HCUP Reports page.
Publications Using HCUP Data

The HCUP e-News is available online at the HCUP-US Web site and distributed via the HCUP Mailing List.
For more information and questions regarding the HCUP e-News, please email hcup@ahrq.gov
For a complete list of HCUP presentations and events, visit the HCUP Events Calendar.
Publicado por salud equitativa en 9:51