Is pornography a public health crisis?

The evidence is piling up.

A committee in the Utah legislature has voted to classify pornography as a public health crisis. Although this is merely a resolution and not a law, it could mark a new stage of awareness of the harms of pornography.

"Everything in the resolution is supported by science and research,” said the state senator who introduced the resolution, Todd Weiler. “It's not just a kooky thing that some politician from Mormon Utah came up with. It's bigger than that."

The news was ridiculed across the internet and on social media by people who asserted that pornography is neither addictive nor harmful.

"I personally believe it is,” Weiler responded. “I think the science shows that it is. I believe that's a discussion we should be having because it's impacting divorces, it's impacting our youth, it's undermining the family"

But is there a problem with this?

Writing at RH Reality Check, an on-line magazine about reproductive and sexual health issues linked to the United Nations, journalist Martha Kempner sneered that there is no science to back up Weiler’s claim that pornography is a public health crisis.

… it’s not an epidemic, it’s not inevitably harmful to the viewer, and it won’t be the downfall of our society. What might be our downfall, however, is allowing politicians to impose their own morality and use pseudoscience and misinformation to scare us all into buying their beliefs or at least living by their rules.

Nonetheless, there is growing evidence to support nearly all of Weiler’s assertions. Unfortunately, evidence does not mean agreement on how to achieve change, or even what successful change looks like.

Broadly speaking, there are two overlapping but different ways of framing opposition to pornography.

Michael Flood, the Australian academic, approaches it from a feminist perspective. At a recent conference at the University of New South Wales organised by Collective Shout, a lobby group “for a world free of sexploitation”, he listed some well-documented harms.

Pornography is becoming a primary sex educator for boys and young men, displacing explanations from parents, formal instruction in schools, and even conversations with peers. However, what they learn from pornography websites is kinky practices which strip sex of intimacy, loving affection and human connection. And they learn that women are always ready for sex and have insatiable sexual appetites.

Women feel betrayed by men who use pornography. Most often men conceal their use of pornography. When a partner discovers it, she often feels as if he was having an affair. Pornography use decreases intimacy and makes women feel less attractive and more like mere sexual objects.

Pornography may become an addiction. Flood is cautious about analogies to drug addiction. He points out that attachment ranges from recreational users to compulsive and self-destructive users. However, as with other addictions, some people experience social, work or financial difficulties because they use pornography.

Pornography entrenches sexist attitudes. Abundant research shows that men who use pornography are more accepting of attitudes that sexualise and objectify women. They tend to want sex without emotional involvement.

As a pro-feminist man, Flood and other activists view the sex industry as patriarchal, misogynistic, and brutalising. They call upon men “to quit pornography and forge ethical sexual and gender relations.” Their strategy for change is good sexual education, mostly in schools.

However, in many respects, the Christian approach might be more realistic, if harder. Fundamentally it is based not on “narrow sexual proscriptions”, as Flood calls them, but on virtue, building up good habits that lead to human flourishing. What the feminist approach lacks is a clear vision of the purpose of sex and how it can be integrated into a mature personality. At the conference, for instance, the idea that sex is connected with babies, children and marriage was barely mentioned.

Young people need to be exhorted to struggle to control their unruly sexuality. The task is made much easier if they realise that this is part of their capacity to participate in procreation and the even greater and more absorbing responsibility of raising children and participating in society as mothers and fathers. Without a unifying vision like this, feminist exhortations also shrivel up into “narrow sexual proscriptions” like “No means No”, “Yes means Yes” and elaborate parsing of the meaning of affirmative consent to sexual activity.

These important differences can put feminist and Christian activists at loggerheads. The beauty of describing pornography as a public health crisis is that they can work together in the same tent. Perhaps we can finally make some progress.

The idea had been kicking around for a while before Senator Weiler’s resolution in Utah. Cordelia Anderson, an anti-pornography activist from Minnesota, told a Congressional Symposium in Washington DC last year that “Individual stories and realities do not constitute a public health concern, but when the reach of today’s pornography through ever expanding and changing technologies create what some researchers, academics, and activists have called ‘the largest unregulated social experiment ever,’ we have reason to be concerned.”

“Various studies document the harms of viewing pornography [she said] including sexually aggressive behavior in adults and youth, sexually reactive behaviors in youth, desensitization to others in sexual situations, rape supportive attitudes, arousal to increasingly violent content, increased levels of sexual insecurities, and difficulties with intimacy or sexual functioning such as erectile dysfunction in males.”

Activists’ model for social change is the complete reversal of attitudes towards tobacco. In the 1950s, most people smoked and doctors even said that it could be good for people’s health. Today, smokers are treated like pariahs.

To be sure, pornography is deeply entrenched in the culture and the pornography industry is well-funded and powerful. But this was also the case with the Big Tobacco.

In 2009 social researcher Mary Eberstadt made a powerful comparison of the tobacco industry with the pornography industry. They both dispute the harms of their lucrative product; they both use bogus science to bolster their claims; they both rationalise addiction; and they both use sophisticated marketing techniques.

So if society turned its back on tobacco, why can’t it kick its addiction to an even more serious public health crisis, pornography?

The canary in the coal mine 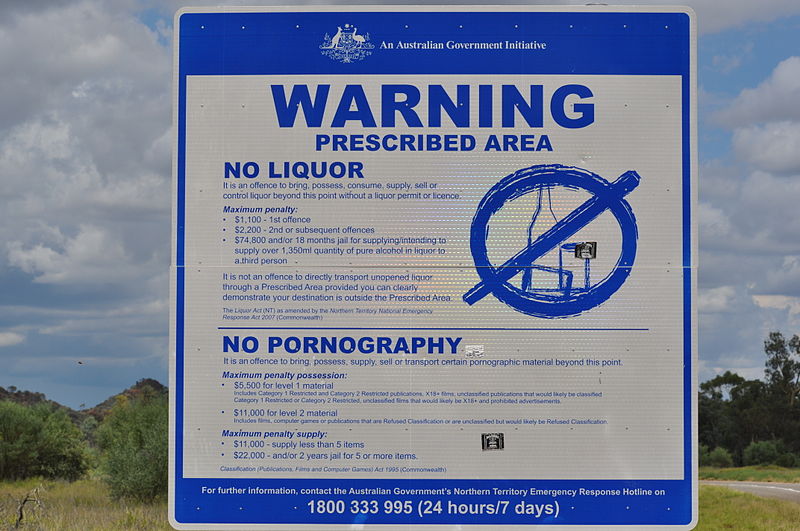 Alcohol and Pornography Ban Warning sign at an Aboriginal community near Alice Springs, in the Northern Territory / Owen 65, Flickr
The stakes are high. As many speakers at the conference pointed out, pornography is destroying the capacity of young people to relate to each other. In the words of Dr Joe Tucci, head of the Australian Childhood Foundation, “Are we willing to remove from relationships the values of love and intimacy which make life worthwhile?”

Another speaker described the corrosive effects of pornography on remote Aboriginal communities. So many communities in the Northern Territory had been rendered dysfunctional by alcohol abuse and pornography that in 2007 the Australian government was forced to send in the Army to protect children against sexual abuse and neglect. It was an unpopular, paternalistic and undemocratic move. But child abuse fuelled by grog and porn had become a real public health crisis. Conditions in the impoverished camps were hellish, with children as young as four sexually abusing each other and pornography a staple of entertainment for men both young and old.

These Aboriginal communities have been corrupted by Western vices. Their desperation and degradation could be what awaits us if we do not win the battle to contain the spread of pornography. A campaign to treat it everywhere as a public health crisis is a welcome step forward.

Michael Cook is editor of MercatorNet.
- See more at: http://www.mercatornet.com/articles/view/is-pornography-a-public-health-crisis/17664#sthash.9j67vijS.dpuf

A few days ago I attended a conference in Sydney on pornography. Unlike most activities, it is easier to write an article about pornography (see below) than to chit-chat about it. "Hey, guess what, I went to this really cool pornography talk today" is not a conversational gambit which will secure a repeat invitation to dinner.
Anyhow, I found out lots of things that I really didn't want to know and are better left undescribed. The theme was very positive -- that pornography is a "public health crisis", rather like smoking. And like smoking, it can be turned around. So I went away convinced that pornography is one of the key social issues of our time; like lead in the water, it can destroy whole cultures, not just individuals.
This is difficult to prove, of course. But I would open my argument by quoting the Analects of Confucius:
“If there is righteousness in the heart, there will be beauty in the character.

If there is beauty in the character, there will be harmony in the home.

If there is harmony in the home, there will be order in the nations.

When there is order in the nations, there will peace in the world.”