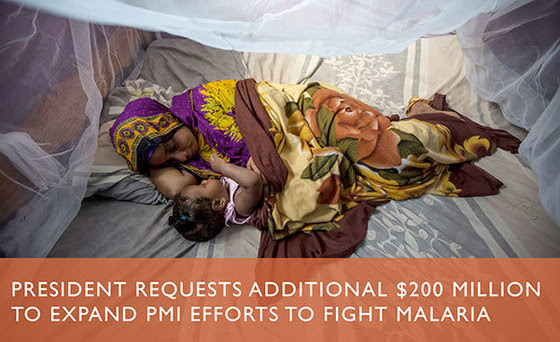 In the past 7 years, President Barack Obama has significantly expanded the U.S. Government’s anti-malaria efforts that began a decade ago when President George W. Bush created the President's Malaria Initiative (PMI). Bipartisan congressional leadership has sustained our work.
President Obama set forth a long-term vision of ending the scourge of malaria during the State of the Union on January 12. To advance the vision of ending malaria, the Administration is requesting $200 million in additional resources, which includes a $71 million increase to the annual funding level and repurposing $129 million in remaining Ebola funds for PMI. The request would provide a total of $874 million in fiscal year 2017, a 30 percent increase over the current year level.
In concert with Congress, PMI is prepared to increase its support to malaria-affected countries to reduce malaria deaths and substantially decrease malaria illness, toward the long-term goal of elimination. Additional resources will directly contribute to PMI achieving our morbidity, mortality, and elimination objectives as outlined in the PMI Strategy 2015–2020 [PDF, 8.8 MB].
If Congress acts on this request, PMI will:

The financial and technical contributions of the U.S. Government are a major catalyst in the remarkable progress that has been achieved in the past 15 years. Since 2000, more than 6.2 million lives have been saved worldwide.
Malaria kills nearly half a million people each year – a child every 2 minutes – and sickens hundreds of millions more, often over and over again. More than half of all school-aged absences in Africa are due to malaria. And, the disease costs the continent billions of dollars each year in health costs and lost productivity.
No child should die of malaria, a disease that is preventable and treatable. Fighting malaria is one of the most cost-effective public health and development interventions. The tools to prevent, diagnose and treat the disease are proven and inexpensive. Ending the scourge of malaria will have long-term, transformative impacts across the globe, saving millions of lives and generating trillions of dollars in additional economic output. Eradicating malaria will rank among humanity's greatest achievements.