BioEdge: Recreating the womb for preemies

BioEdge: Recreating the womb for preemies 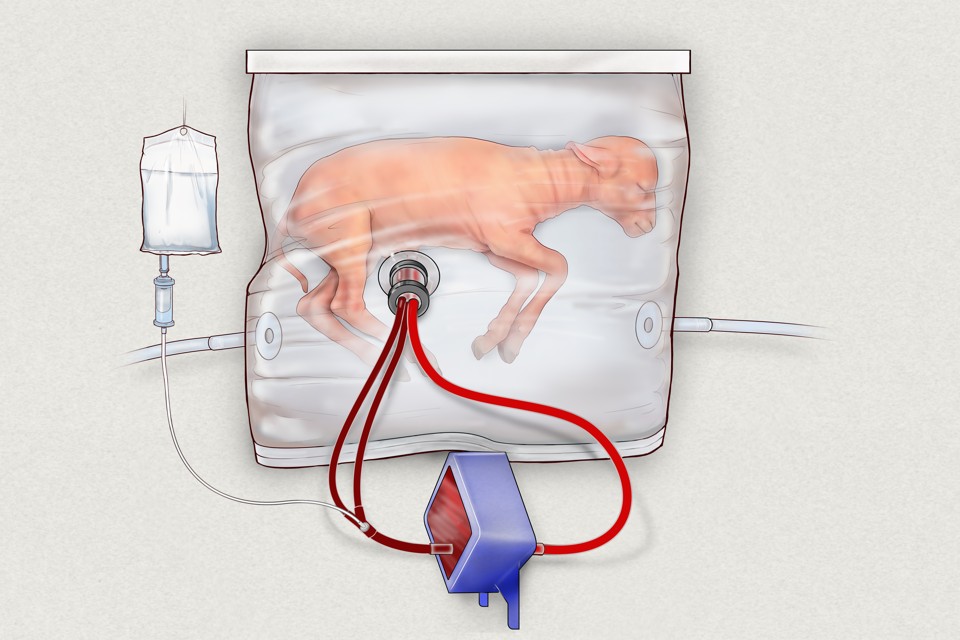 Researchers have moved a step closer to ectogenesis – brewing babies in an artificial womb. A team at the Center for Fetal Research in Philadelphia have developed a womb-like environment in which premature lambs have already lived at least four weeks before being delivered.

A similar system for babies is at least two years off, but if it is successful, it would give the tiniest newborns a precious few weeks to develop their lungs and other organs.

The fetal lambs grow in a temperature-controlled, near-sterile environment, breathing amniotic fluid as they normally do in the womb, their hearts pumping blood through their umbilical cord into a gas exchange machine outside the bag.

Of the one in ten US births that are premature (younger than 37 weeks gestational age), about 30,000 per year are critically preterm -- younger than 26 weeks. Extreme prematurity is the nation's leading cause of infant mortality and morbidity, accounting for one-third of all infant deaths and one-half of all cases of cerebral palsy attributed to prematurity.

Neonatal care practices have improved overall survival of premature infants and have pushed the limits of viability to 22 to 23 weeks of gestation. At that age an infant weighs below 600 grams -- little more than a pound -- and has a 30 to 50% chance of survival. But this survival comes at a high price in quality of life, with a 90% risk of morbidity, from chronic lung disease or other complications of organ immaturity. Survivors face lifelong disability.

Previous researchers have investigated versions of an artificial placenta in animal models, but pumpless systems have achieved a maximum duration of 60 hours, and the animals have sustained brain damage. The new system, in contrast, has operated up to 670 hours (28 days) with some animals, which remained healthy. The lambs showed normal breathing and swallowing, opened their eyes, grew wool, became more active, and had normal growth, neurological function and organ maturation.

The team does not aim to extend viability to an earlier period than the current mark of 23 weeks. Before that point, limitations of physical size and physiologic functioning would impose unacceptably high risks.

The development of an artificial womb will inevitably be linked to the abortion debate. Reasoning that babies could survive after 20 weeks, some legislators might try to ban abortions after 20 weeks of gestation. And if it became a viable alternative, the meaning of abortion changes. As Peter Singer wrote with Deane Wells in 1985 in The Reproductive Revolution, “Freedom to choose what is to happen to one’s body is one thing; freedom to insist on the death of a being that is capable of living outside of one’s body is another.”


The Belgian media was abuzz this week with the news that the Catholic hospitals which provide a substantial portion of psychiatric beds will permit euthanasia for non-terminally-ill patients. It is an unprecedented reversal of their stand on end-of-life care.
Supporters of euthanasia, of course, were delighted. “The last relics of the paternalism of the shepherd have been replaced by individual self-determination," said one politician. Opponents, however, were puzzled and alarmed. Fifteen years after Belgium legalised euthanasia, it has become hard to find a hospital where is it not being practised. Read about it below.


Recreating the womb for preemies
by Michael Cook | Apr 29, 2017
US researchers are close to an artificial womb for extremely premature babies


Do LGBT parents have a right to a full genetic relationship?
by Michael Cook | Apr 29, 2017
Why should they settle for anything less than heterosexual couples?


Where did Nazi doctors learn their ethics? From a textbook
by Michael Cook | Apr 29, 2017
There was no lack of ethical training in the Nazi era


Euthanasia is a ‘sideshow’ in end-of-life care, says leading US bioethicist
by Paul Russell | Apr 27, 2017
Ezekiel Emanuel says that pain is not the the reason people ask doctors to end their lives