Nitschke creates his own euthanasia award

Nitschke creates his own euthanasia award

Honouring crass and undignified behaviour says something about the cause 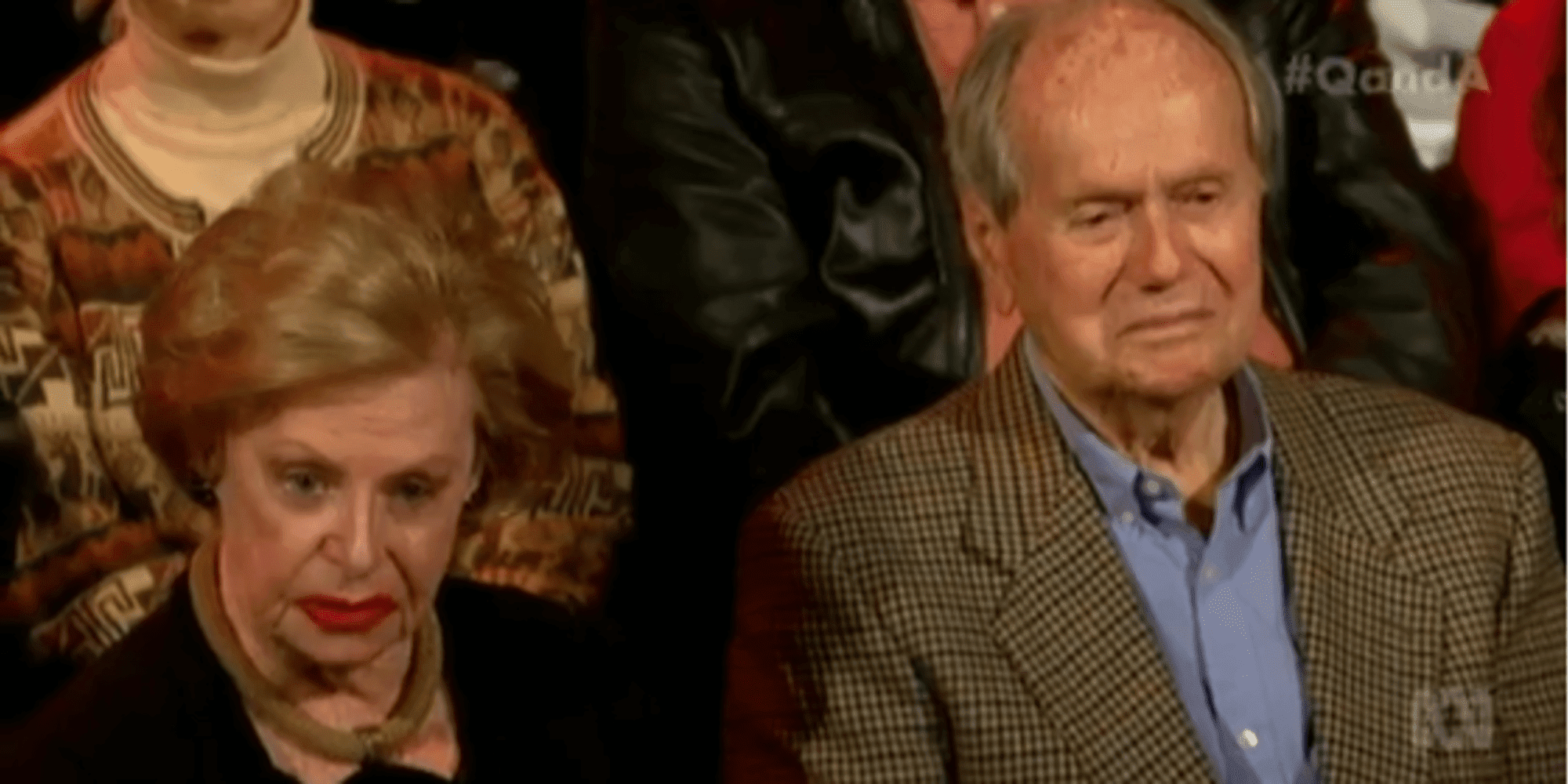 Mr and Mrs Fellows, winners of the Peaceful Pill Prize
Anyone who has ever sat on an awards committee knows well that there are standards to be met. Make the award too easy to attain or provide it to someone who has not met the criteria and the currency of the award is diminished. Raise the bar too high and no one applies.
At Exit International they must have ridiculously low standards. Exit boss and former medical doctor, Philip Nitschke recently awarded his so-called “Peaceful Pill Prize” to an elderly Australian couple essentially because the woman concerned recently cried a patronising “bullshit” at Professor Margaret Somerville on an Australian National current affairs program.
Nitschke claimed that Mr and Mrs Fellows' comments were “forthright” and “a significant contribution to the Australian euthanasia debate”. Crass and undignified would be more like it!
There was a time when everyone understood that to raise one's voice or to swear in the context of a debate was to lose the argument. Maybe not so much nowadays; after all, the show's presenter, Tony Jones said that the “bullshit” comment was “refreshing” which seemed to me, at the time, to be a ringing endorsement of Mrs Fellows' sentiment.
Nitschke's endowment upon the Fellows', it seems, was no accident either. He admits that the couple are members of his Exit organisation and exemplars, one suspects, of Exit's new militant wing, Exit Action. If Mr and Mrs Fellows  have set the standard, perhaps we can expect more of this revolting behaviour as other card-carrying Nitschke-ites vie for the same prize.
So, what do the Fellow's gain for their inglorious moment? Steak Knives? Champagne perhaps? No. “Two redeemable vouchers for 12mg packages of pure sodium pentobarbital (Nembutal).” I suppose an alternative might have been a lifetime membership, but I digress.
The award ceremony will surely raise the interest of Border Protection and Customs. But, of course, Nitschke's not stupid: "As possession of this drug in Australia is illegal, the details of the delivery of the prize will be kept confidential. Delivery will be by unconventional means" said Nitschke. He added that the prize would amount to a “safety net” for the Fellows -- how bizzarre.
The Fellows, by their own admission, are not unwell but simply don't want to live in a nursing facility in their decrepitude. None of us does, really, let's be honest. That's an issue that many of us will face; but few, I suspect would want to try to foist upon society a euthanasia regime with all its attendant and irretrievable risks simply for the sake of getting our own way. That's tyranny clothed as autonomy.
The Fellows may not have thought that through. Maybe they are unaware of the trail of grief created by Nitschke's “collateral damage” in the deaths of young people via Exit methods; young men like Lucas Taylor, for example.
But people who are used to getting their own way don't necessarily consider much else in the drive for autonomy. The well, well-off and worried have a very blinkered view re-enforced by the Nitschke mantra of rationality.
Such was the assurance given by Exit's youngest member-now-statistic, Adam Maier-Clayton, who suicided recently in Canada. Twenty-seven-year old Maier-Clayton had some significant mental health issues yet claimed to be entirely “rational”.
According to one report, he suffered anxiety, mood disorder and obsessive compulsive disorder and tried all sorts of remedies and relief to no avail; difficulties that should not be discounted. He spent the last few months campaigning for the inclusion of mental illness within the scope of Canada's new death legislation, arguing that it is not only those who are near death suffer refractory symptoms.
In January he posted a picture of himself wearing an Exit T-shirt with an image of Nitschke emblazoned across it, saying that he was, “rocking his Exit International Official membership”, and adding that he felt that he was “absurdly rational” and should not be excluded from Canada's death laws.
Notwithstanding Mrs Fellows' expletive, just because someone can engage in a process of thought does not necessarily make them truly rational. It is not necessarily thought processes that suffer through depression, unremitting pain and the like; it is, in my own experience, the connection with others that diminishes - the threads that bind us to each other. In other words, the context of one's life can seem strangely distant. Blurred by pain, remove the context of care, of family, of future from the equation and thought -- even seemingly rational thoughts -- and logic become untrustworthy guides.
So explained British columnist, Andrew Lawton recently in the Canadian Global News:

"This idea that suicide is dignified and painless is a dangerous one. Take it from someone who tried and failed. Nearly seven years ago I overdosed on dozens of pills — causing multiple cardiac arrests and weeks in hospital on life support. I survived, but only narrowly so.
"Everything from the method to the date and time was meticulously thought out. I picked the day because I didn’t have any other appointments scheduled — as though missing a meeting would have been the only problem with my plan any other day. Suicidal people are irrational. This is true even when decisions appear to be made through logic and reason.
"I saw suicide as the answer to pain I was convinced wouldn’t abate. It wasn’t just about picking the easy way out of an unpleasant situation — it was the only way. I saw no way my life would improve. Spoiler alert: it did.
"Like Maier-Clayton, I had tried myriad therapies, medications, and treatment throughout my years-long battle with depression. By the time I tried to pull the plug on my own existence, none had made an impact. But after the attempt, that changed. Healing didn’t happen overnight, but things that hadn’t worked previously showed positive results. My circumstances didn’t change, but my outlook did."

It must surely be amongst the very last things that a society would want to have to someone like Nitschke telling suicidal people that their desire for death is “rational”. It's an endorsement. Like euthanasia and assisted suicide, it runs counter to suicide prevention.
Likewise, telling those who understandably fear their demise that they have a “way out”, that, effectively, they don't need to address their fears nor find a path through them to a fulfilling life in spite of them, is reckless.
But these are precisely the messages that euthanasia and assisted suicide laws send -- with the added weight of government approval. We need to learn not to reward bad behaviours and bad ideas.
Paul Russell is director of HOPE: preventing euthanasia & assisted suicide, which is based in Australia. This article has been edited and republished from his blog with permission.
- See more at: https://www.mercatornet.com/careful/view/nitschke-creates-his-own-euthanasia-award/19679#sthash.4OgOWP3x.dpuf


“No matter how much I accomplish during the ridiculous standard of the first 100 days, & it has been a lot (including S.C.), media will kill!” This was President Trump’s evening tweet a couple of days ago.
But the focus on the First Hundred Days was not created by the media. In the campaign, Trump issued a “contract” with American voters setting himself nearly 30 goals to accomplish within that time to make American great again.
Of course it was too much. He should have known that. As Robert Speel points out below, with the exception of FDR, who invented this crazy benchmark, most presidents haven’t managed to post many goals in their first 100 days.