And the family is in crisis. 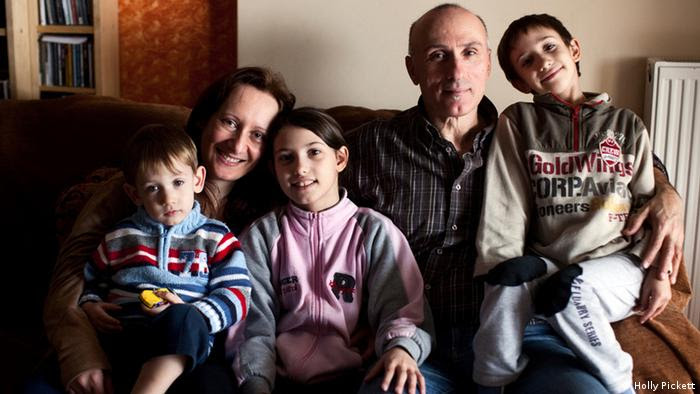 A Greek family facing hardship in 2014. Photo: Deutsche Welle
European women have been having fewer children for decades now.  However, the problem is worsening in Greece as couples continue to experience high unemployment, precarious jobs and financial strain.  Greece has been in crisis since 2010 when austerity measures were first imposed.
Fertility doctor Minas Mastrominas recently told The New York Times that couples are increasingly deciding to have just one child or no children at all, describing women tearfully renouncing plans to conceive and a surge in single-child parents asking him to destroy all of their remaining embryos (fertilised eggs put in storage).
The birthrate in Greece is about 1.34 children per woman, well under the 2.1 rate needed to keep a population steady.  Approximately a fifth of women born in the 1970s are likely to remain childless, a level not seen since World War I according to the Wittgenstein Center for Demography and Global Human Capital. Hundreds of thousands of young people of childbearing age have also left to find better prospects elsewhere until the economy improves; their return uncertain.
Chronically low birthrates put pressure on pension and welfare systems as the work force shrinks.  Fiscal pressure also means that Greece is unable to afford attractive family support programs to attempt to encourage births, like those that countries with similarly dire birth rates such as Spain, France and Italy are putting into place.  Dimitrios Karellas, the general secretary of the Labor and Social Welfare Ministry in Greece, commented to The New York Times:
“We need to allocate more money to create the services needed for families and children.  But it’s hard to do amid the crisis.”
Women around the world are already increasingly postponing childbirth until they establish careers, and then having fewer children to attempt to continue to balance both family and their work. As recession drags on in Greece, women are delaying having children even longer for fear of jeopardizing work opportunities, and then increasingly turning to fertility treatment at an even greater cost. For instance:
As the crisis persisted, Anastasia Economopoulou, 42, pushed back her dream of having several children. She was fearful of losing her job as a saleswoman at a retail branding company after managers said they did not want women who would get pregnant.  Eventually, she turned to in vitro fertilization treatments at Dr. Mastrominas’s clinic. But her salary slumped by 30 percent as company sales fell, and her husband’s by more, cutting the number of treatments she can afford.
Greece needs to find a way to return to its family culture of years gone by, something which is proving difficult as recession continues to haunt it.
- See more at: https://www.mercatornet.com/demography/view/recession-continues-to-haunt-greece/19664#sthash.rPy1ltMX.dpuf


“No matter how much I accomplish during the ridiculous standard of the first 100 days, & it has been a lot (including S.C.), media will kill!” This was President Trump’s evening tweet a couple of days ago.
But the focus on the First Hundred Days was not created by the media. In the campaign, Trump issued a “contract” with American voters setting himself nearly 30 goals to accomplish within that time to make American great again.
Of course it was too much. He should have known that. As Robert Speel points out below, with the exception of FDR, who invented this crazy benchmark, most presidents haven’t managed to post many goals in their first 100 days.