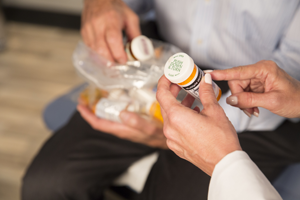 CDC’s Injury Center intends to commit approximately $3,000,000 over a 4-year project period with a maximum of $750,000 per year. This funding will support one application to better understand how reducing the dose or stopping the use of opioids and benzodiazepines can reduce injury and improve safety in older adult patients. Specifically, the research will evaluate the effectiveness of medication tapering and discontinuation strategies to reduce falls and unintentional injury among older adults. The purpose is to advance knowledge about how health professionals can improve prescribing practices for medications in which the risks may outweigh the benefits, contributing to falls, overdose, and other injuries in community dwelling older adults.
For healthcare providers, this research will develop evidence-based strategies that can be integrated into the workflow and can be adopted to taper and/or discontinue opioids, benzodiazepines, and other CNS-active medications and improve patient safety. Additionally, the research could be used to inform future trainings and provider education.
The funding opportunity announcement can be found at http://www.grants.gov/. Note that amendments to the announcement focus and application dates are possible. Please check for updates on grants.gov.
Deadlines:
New Funding Opportunity Announcement: Clinical Trials or Observational Studies of Behavioral Interventions for Prevention of Opioid Use Disorder or Adjunct to Medication Assisted Treatment-SAMHSA Opioid STR Grants (R21/R33)
This National Institutes of Health (NIH) funding will help examine the impact of behavioral interventions, such as mindfulness meditation, cognitive behavioral therapy, or multidisciplinary rehabilitation for primary or secondary prevention for opioid use disorder or as an adjunct to medication assisted treatment. The funding is within the context of states’ plans for use of the Substance Abuse and Mental Health Services Administration (SAMHSA) Opioid State Targeted Response (STR) grant funds authorized under the 21st Century Cures Act.
Deadline: January 18, 2018
New Opioid Training for Providers: Reducing the Risks of Opioids 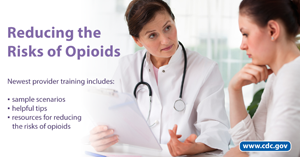 CDC launched Reducing the Risks of Opioids, the fourth module of a series of interactive, online trainings for healthcare providers. Healthcare providers will be able to recognize situations that can increase risk for harmful outcomes for patients on opioid therapy and explain the range of clinical tools that can help in risk assessment and clinical decision-making, such as prescription drug monitoring program (PDMP) data and urine drug testing (UDT). This training features recommendations from theCDC Guideline for Prescribing Opioids for Chronic Painand provides sample scenarios and clinical tools and resources. This training is part of a series that is available for free continuing education credit and is located on our Training for Providers webpage.
NCHS releases 2016 data on opioid overdose deaths
CDC’s National Center for Health Statistics has released their Data Brief: Drug Overdose Deaths in the United States, 1999-2016. This data comes from the National Vital Statistics System (NVSS), showing that deaths from drug overdose are an increasing public health burden in the United States. Some key findings include:
Upcoming 2018 RxSummit
The National Rx Drug Abuse & Heroin Summit is the largest annual gathering for stakeholders to discuss what is working in prevention and treatment for prescription and illicit opioids. Be part of the international discussion on addressing the opioid crisis by attending the 2018 National Rx Drug Abuse & Heroin Summit in Atlanta. Registration is now open.
Recent Articles and Publications
Publicado por salud equitativa en 12:12