Deaths from drug overdoses have risen steadily over the past two decades and have become the leading cause of injury death in the United States. Prescription drugs, especially opioids, have been increasingly implicated in drug overdose deaths over the last decade. In response to recent increases in opioid-related morbidity and mortality, the U.S. Department of Health and Human Services (HHS) has made addressing the opioid abuse problem a high priority. HHS is focused on implementing evidence-based approaches to reduce opioid overdoses and overdose-related mortality and the prevalence of opioid use disorder.
HHS's initiative focuses on three priority areas to combat opioid abuse:
AHRQ is increasing the evidence base on this topic with data and research and provides a forum where communities can share their toolsfor combating the issue of opioid misuse. 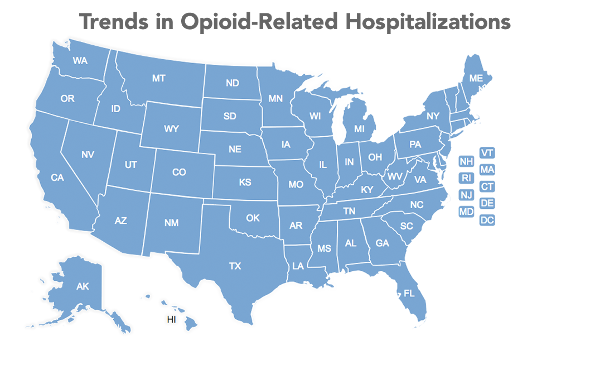 AHRQ is investing about $12 million over 3 years in a series of grants to discover how to best support primary care practices and rural communities in delivering MAT for opioid abuse in rural primary care practices. AHRQ-funded projects will explore and test solutions aimed at overcoming barriers to the use of MAT in rural primary care settings, such as limited continuing training opportunities for prescribing physicians, negative perceptions about people with substance abuse disorders, negative expectations about the effectiveness of treatment, and lack of social support services in rural communities.
Practices involved in the initiative will provide access to MAT to more than 20,000 individuals struggling with opioid addiction using innovative technology, including patient-controlled smart phone apps and remote training and expert consultation using Project ECHO—a telehealth program started with AHRQ support that links specialists at an academic hub to primary care providers working on the frontlines in rural communities.
AHRQ has awarded grants to:

AHRQ's Innovations Exchange features several innovations aimed at reducing opioid misuse and associated health and safety consequences. The initiatives include an opioid overdose education and naloxone distribution program targeting high-risk communities, a mayoral task force in New York City that developed a series of strategies to combat the problem, an emergency department that implemented a protocol on the use of controlled substances, and a program to promote appropriate prescribing and monitoring of opioid therapy for patients with chronic pain not caused by cancer.
AHRQ's Innovations Exchange also offers a toolkit with resources for first responders, prescribers, patients, family members, and those who are recovering from opioid overdose; guidelines to help clinicians make treatment decisions for patients who may be abusing opioids; a manual on the development of overdose prevention programs; and a guide that supports implementation of overdose prevention and response strategies.