Oracle Health Sciences today announced the results of a new study that explores the current and planned status of precision medicine initiatives, associated challenges and the future impact of this discipline on life sciences and healthcare communities. 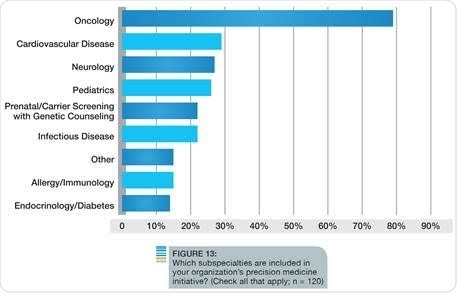 Conducted by GenomeWeb and sponsored by Oracle Health Sciences, the study revealed perspectives on the state of precision medicine from 316 scientists, researchers and other members of the life sciences and healthcare industries. While these communities have largely embraced the concept behind precision medicine — using the molecular makeup of patients in order to improve the diagnosis and treatment of disease — the survey captured a deeper look into the current and future statuses, approaches and implementations of precision medicine initiatives.
Among its numerous findings, the survey discovered that the majority of organizations are active with precision medicine initiatives; 62 percent of the respondents participate in research activities to drive biomarker discovery or translational research, while another 12 percent would like to participate or are planning to do so in the next 12-24 months. Not surprisingly, oncology is still considered the disease area where precision medicine will have greatest impact. However, respondents also believe precision medicine will benefit several other disease areas, including cardiovascular disease, neurology and pediatrics, which are already included in some organizations’ current initiatives.
Early initiatives in precision medicine leveraged commercial partners to generate testing and results, but the new research highlights a shift of bringing more functionality in-house, with over 50 percent of respondents claiming to use either a hybrid or in-house approach.
More than 72 percent of respondents from organizations with ongoing precision medicine initiatives said they are using next-generation sequencing (NGS) variant panels. There is a growing interest in additional data types, including more complex NGS, whole genome sequencing, and other omics data types. The study also found that nearly 80 percent hope they will be able to fully leverage large, more complex datasets to identify new insights and improve treatment recommendations by implementing these technologies in the future.

The survey also found that the vast majority of respondents who are not currently planning such an effort indicated that they would see a benefit in pursuing one, and only 18 percent of the respondents indicated an insufficient benefit to their business. However, there are still a variety of challenges in developing a precision medicine initiative, with insufficient technical structures cited as a huge obstacle in organizations’ ability to pursue precision medicine initiatives.
“Precision medicine is vital to advancing medicine, and critical to its success is the underlying technology needed to manage the large volumes of data it requires,” said Andy Alasso, Global Vice President, Oracle Health Sciences. “The findings revealed that while there is widespread interest in using more complex and diverse clinical and genomics data, there is also anxiety among researchers about deficiencies in their current technical infrastructure to handle such data.  This underscores the importance of platforms like Oracle Healthcare Foundation (OHF) to ensure the pace of innovation in precision medicine is not slowed by a lack of technical support.”
The study was conducted in the fall of 2017 by GenomeWeb and sponsored by Oracle Health Sciences. Data was gathered via an online survey taken by GenomeWeb readers from a variety of organizations including academic institutes, hospitals/medical centers, government agencies, pharmaceutical companies, contract research organizations, genomics service providers and clinical/reference labs. The total number of respondents surveyed was 316 and included primarily scientists and researchers, followed by people in executive or corporate management positions.
Source:
https://www.oracle.com/
Publicado por salud equitativa en 10:45