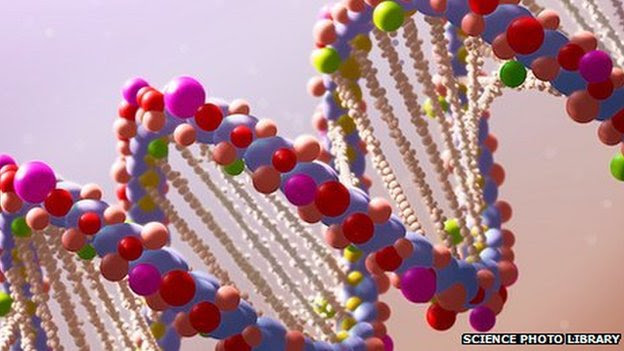 The personal DNA test detects a range of gene variants


A personal DNA test that has sparked controversy in the US has launched in the UK.
The UK's Medicines and Healthcare Products Regulatory Agency (MHRA) says the 23andMe spit test, which is designed to give details about a person's health risks based on their DNA, can be used with caution.
But critics say it may not be accurate enough to base health decisions on.
The company, California-based 23andMe, stands by its test.
Backed by Google, the firm offered US customers details of health risks based on gene variants they carry.
But in November 2013, the US Food and Drug Administration (FDA)banned the company from marketing its service in the US, claiming 23andMe had failed to provide adequate information to support the claims it made about results.
A month later, the company stopped offering genetic tests related to health.
'Think carefully'


An MHRA spokesperson said it regulated such tests in the UK to make sure they met minimum standards.
"People who use these products should ensure that they are CE marked and remember that no test is 100% reliable so think carefully before using personal genome services.
"If after using the service, you have any questions or concerns you should speak to your healthcare professional."
She added: "If you are concerned that you have an incorrect result due to a faulty product, you can report this to MHRA at aic@mhra.gsi.gov.uk or 020 3080 7080."
The UK Department of Health said it was behind the idea of using gene tests to guide patient care within the NHS, but echoed the MHRA advice on giving careful consideration before opting for services like the one offered by 23andMe.
The Alzheimer's Society went a step further saying: "'If you are worried about your memory, your GP should be the first port of call - not a home DNA testing kit. Research has identified a number of genes that may play a role in the development of dementia but we don't know enough to use these as a diagnostic tool."
23andMe chief executive Anne Wojcicki said: "The UK is a world leader in genomics and we are very excited to offer a product specifically for UK customers."
Jump media player
Media player help
Out of media player. Press enter to return or tab to continue.
Anne Wojcicki, 23andMe: "We're really partnering with the consumer"
Ms Wojcicki is separated from but still legally married to Sergey Brin, the co-founder of Google - which has invested millions in 23andMe.
The company had previously offered results on a customer's risk for 254 diseases and conditions, including identifying genes linked to heart disease and breast cancer. There was also information on how individuals might respond to certain medicines.
Continue reading the main story

Genetic testing is an important medical tool in certain situations, but for healthy people as a way to predict common complex diseases, it's pretty useless”

Dr Marcy DarnovskyCenter for Genetics and Society
But the FDA said the reliability of such tests had not been proven to its satisfaction. It was also worried that some customers could make life-changing decisions based solely on their results.
The UK Department of Health said the product launched in Britain was very different to the service halted by the US regulator.
"Many of the drug responses, inherited conditions and genetic health risks that were of concern in the US have been removed," a spokesperson told BBC News.
In October, 23andMe said it would sell kits in Canada - these too contain only a handful of health-related results.
"I think a large part of it is trying to expand their markets," said Professor Hank Greely, director of the Center for Law and the Biosciences at Stanford University in California.
"They may also want to make it clear to the public, to their investors, to their employees that they're alive and kicking."
What's the plan?


Dr Marcy Darnovsky, executive director of the Center for Genetics and Society in California, said the UK and Canadian launches could be a way of placing pressure on the FDA by demonstrating that regulators in other countries found no fault with their product.
"Genetic testing is an important medical tool in certain situations, but for healthy people as a way to predict common complex diseases, it's pretty useless," she told BBC News.
"Most complex diseases and almost all the common ones - with some exceptions such as the BRCA 1 and 2 genes (implicated in breast cancer) - are multi-factorial with many genes and other biological, social and environmental causes."
What happens to the data gathered by 23andMe also concerns some people. "It's not entirely clear what their business plan is - whether they want to make money by selling kits to consumers, or whether they want to make most of their money by selling consumer data to other companies," Prof Greely told BBC News.
But Ms Wojcicki believes the information provided to customers is empowering. "23andMe's mission is to ensure that individuals can personally access, understand and benefit from the human genome," she said.
Commenting on the announcement, Mark Thomas, professor of evolutionary genetics at University College London, said: "For better or worse, direct-to-the-consumer genetic testing companies are here to stay.

"One could argue the rights and wrongs of such companies existing, but I suspect that ship has sailed."
Publicado por salud equitativa en 4:30