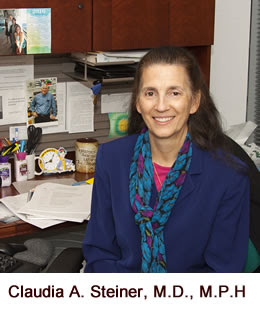 Sometimes the most interesting questions in health care are posed by someone outside the research community. That was the case not long ago when a journalist asked: What trends are occurring related to double mastectomies?
Somewhat surprisingly, a scan of the literature showed the published data were incomplete or reported on narrow populations of women. My colleagues and I found limited information related to trends in mastectomies, including how many, in what settings, or the procedures that were being performed.
As it turned out, answers to those and other questions were striking. AHRQ’s recently released Statistical Brief, “Trends in Bilateral and Unilateral Mastectomies in Hospital Inpatient and Ambulatory Settings, 2005-2013,” provides these insights:
These and other findings in the Statistical Brief were drawn from AHRQ’s Healthcare Cost and Utilization Project (HCUP), a family of databases that present the largest collection of longitudinal hospital care data available in the United States.
Though our analysis does not answer the “why” behind these data, some of these trends could have been expected. The increase in mastectomies performed as outpatient procedures, for example, mirrors an ongoing trend in health care toward same-day surgery. And patients’ growing understanding of family history and genetics on health risks may underlie the steep rise in double mastectomies as a preventive approach.  Our data indicate that most of the double mastectomies treated cancer in one breast and included a preventive mastectomy for the other breast.
What’s surprising about these findings is their magnitude, particularly related to double mastectomies. In 2005, 9 of every 100,000 women chose a double mastectomy. By 2013, the rate had risen to 30 of every 100,000 women. Also surprising was that 33 percent of double mastectomies were performed as outpatient procedures by 2013.
Clearly, women with breast cancer navigate a complex landscape when making treatment choices. Their decisions may be influenced by advice from their doctors, fear of cancer recurrence, a desire for cosmetic symmetry, or their desire to reduce risk.
At present, however, the trends are clear. A growing proportion of women are choosing mastectomies – especially double mastectomies – rather than breast-conserving lumpectomies. And more of them are recovering at home rather than in a hospital bed. It’s important information – for patients, for families, for physicians, and the research community.
We’re glad someone asked.
Page last reviewed February 2016
Internet Citation: Mastectomies, Especially Double Mastectomies, On the Rise. February 2016. Agency for Healthcare Research and Quality, Rockville, MD. http://www.ahrq.gov/news/blog/ahrqviews/022216.html
Publicado por salud equitativa en 6:58