Only a fraction of our children are fully nurtured, thanks to the breakdown in marriage. 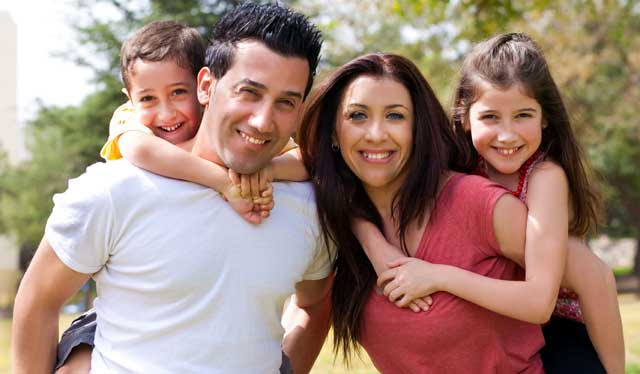 There is a very simple fact that social scientists have neglected to make clear to the country:  Only a fraction of our children are fully nurtured, relationally, because of the breakdown in family structure over the last fifty years: Children in single parent homes get a one-love diet while children in always-intact married families get a three-love diet.
Only one adult love is present in the single parent family while three adult loves are present in the always intact married family (the love of mother, the love of father and the love between mother and father).  The love between mother and father is especially powerful. It makes a big difference in their lives and to the social infrastructure of the county.
One set of adults can bear a lot more weight and traffic than the other.  For instance: just one of the many critical tasks is the modeling of living in a world of male and female where both cooperate on serious and significant tasks.  The child raised in the single parent family has less chance of learning that. These are uncomfortable facts, but facts nonetheless.  And they have huge consequences. 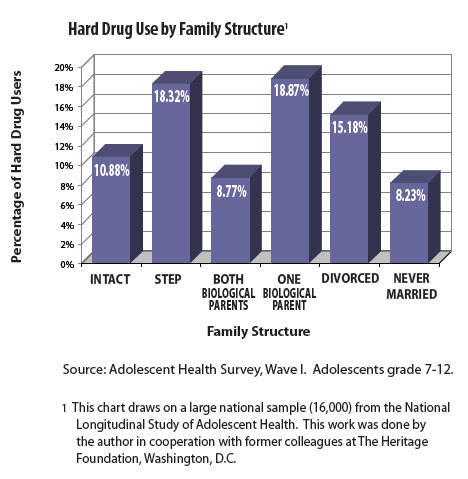 Some will object, with good reasons, that the single parent family can produce strong adults--and many do.  But, on average, the children of single parent families do not become as strong as adults as do the children of married parents (even as single parents often give heroically of all the love they have).  This is tough for many to take and in academia many still deny it.  It is a sad and strange phenomenon but many social science professors are quite anti-scientific; they deny or avoid the disquieting data as a form of short-sighted “kindness”.
On average the single-love diet cannot deliver what the three-love diet does.   How do we as a society move from the single love diet to the three love diet for all children? The answer: restoration of a culture based on – bear with me -- chastity.  Without a culture of chastity society does not get a culture of strong marriages.  Folk may laugh but there is no alternative and savvy parents, single or married, work hard to transmit this to their children for everybody’s sake—for the young folk’s own future, the future of the grandchildren, and for a more peaceful old age future for the grandparents.
What makes it possible for an adolescent to come up with such a resolve?  How do we grow such young people?  Parents cultivate it be they married or single by telling the truth about the relationship between chastity and life-long love between a man and a woman.  And the data show that teenagers (deep down) welcome their parents when they raise these issues.
Single parents have a tougher task here, and it is therefore one of the most critical projects for our society.  There is a need for a movement among single parents, a movement to raise chaste children, chaste teenagers so that they will have the happiness of being at the wedding of their children, and their grandchildren.  Such a movement needs alongside it a solidarity movement of everyone else to cheer them on and help them.  This is the infrastructure work we need most if we are to have future citizens who can take over running a country.
It is amazing how sex, children, marriage, chastity and the future are all intertwined.  It is time for all families to link together to pull this off for the next generation.  Everything else in society is connected to this. Everything.
Pat Fagan is Senior Fellow and Director of the Marriage and Religion Research Institute (MARRI) at the Family Research Council in Washington D.C. This article is reproduced from the MARRI Blog with permission.

Former astronaut John Glenn, who died yesterday at 95, achieved some remarkable firsts. In 1962 he became the first American to orbit the earth, and in 1998 the oldest man, at 77, to travel into space.
As a combat pilot he flew more than 150 missions during World War II and the Korean War. As a test pilot, he set something called  the transcontinental flight speed record. He was a Democrat Senator for 24 years. He became a millionaire.
But for my money his greatest achievement was to stay married to his childhood sweetheart, Annie Castor, for 73 years. He died with her and their two children, David and Lyn, at his bedside.
From the family perspective – starting with marriage at around 22 – his was a life that must seem more exotic to most young people today that his space travel. And where today technology seems to separate man from God, John Glenn’s orbits only confirmed his faith in his Creator. As he said during his 1998 adventure: "To look out at this kind of creation out here and not believe in God is to me impossible."
There is as much to be celebrated in these details of his life as in his daring escapades.
"Godspeed, John Glenn,” they said to him the first time, and Ohio Governor John Kasich echoed that today: "Though he soared deep into space and to the heights of Capitol Hill, his heart never strayed from his steadfast Ohio roots. Godspeed, John Glenn!"
What better salute to an American hero!