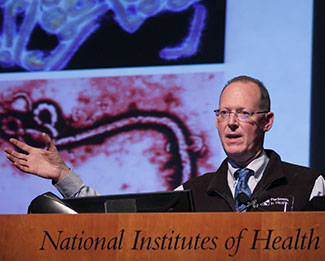 The formula for global health equity, according to longtime champion Dr. Paul Farmer, is a combination of research, training and delivery of care. But that last component, he says, doesn't always get enough attention.
During a recent visit to the NIH, Farmer reflected on his decades of experience treating the world's poorest people and addressed what can happen when communities do, or don't, have the "staff, stuff, space and systems" needed to improve health. His talk, "Against Balkanization: Research + Training + Care = Global Health Equity," was the 2016 David E. Barmes Global Health Lecture, sponsored by Fogarty and NIH's National Institute of Dental and Craniofacial Research (NIDCR). The speaker series honors the late David E. Barmes, who was a special expert for international health at NIDCR.
A physician and medical anthropologist, Farmer chairs the Department of Global Health and Social Medicine at his alma mater, Harvard Medical School. He is also the chief strategist and co-founder of Partners in Health (PIH), a nonprofit that provides care, builds capacity and strengthens health systems in impoverished communities. Launched in 1987, PIH has expanded well beyond its initial site in Haiti and now operates in 10 countries.
Dividing time equally between research, training and caregiving—the standard at most medical schools—must also apply to global health programs, Farmer said, suggesting that students should spend more time delivering care. 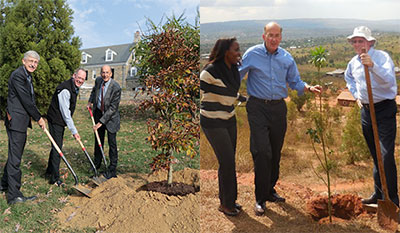 Photo on left by Bill Branson, NIH. Photo on right courtesy of Paul Farmer.
(Above left) While visiting the NIH campus, Partners in Health co-founder
Dr. Paul Farmer (center) joined NIH Director Francis S. Collins (left)
and Fogarty Director Roger I. Glass (right) to plant a tree in front of
Fogarty's Stone House. The event was to reciprocate for a tree
planting by Drs. Glass and Farmer in Rwanda (at right), one of the
countries where Partners in Health operates.
"You can't do research on people, especially sick people, without taking care of them," he explained. "That's what is right about an American teaching hospital. And, that's the way global health needs to be as well. Too often, I think sponsoring institutions, including universities, try to skip over the caregiving part."
Farmer began spending time in Haiti before he started medical school and has lived with one foot there and the other in Boston since the 1980s. His career as a physician specializing in infectious diseases and global health equity was shaped by the emergence of HIV/AIDS and the view from his two very different locations.
He recalled earlier days in the epidemic when some people thought antiretroviral drug regimens would be too costly or too complicated to administer in developing countries. But PIH, which began using the medications in rural Haiti in 1997, showed it could be done. More recently, the two districts in Rwanda where the nonprofit operates haven't had a case of mother-to-child transmission of HIV for at least two years. And, Farmer pointed out that 15 million people are alive today because of support from the U.S. President's Emergency Plan for AIDS Relief (PEPFAR), launched in 2008.
"That's the fruit of science that I'm talking about," he said. "That's the kind of effect we can have when we link knowledge that comes out of basic science and clinical trials to an equity platform. And it's a pretty amazing story." 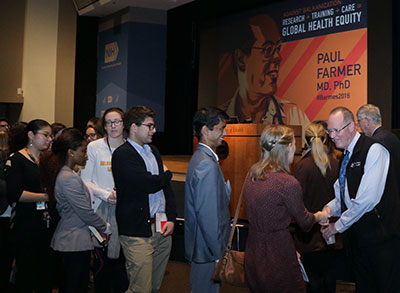 Photo by Bill Branson, NIH
Enthusiastic attendees met with Farmer following the lecture.
Farmer praised the NIH for investing in studies of Ebola and Marburg, two viruses that have caused outbreaks in Africa. "NIH, the jewel in the crown on this country, is a global institution," he said, giving special recognition to NIH's National Institute of Allergy and Infectious Diseases (NIAID). "I don't believe the reason NIH and NIAID invested in Ebola was just because they were frightened it would be used as a bioweapon. This is science. This is a pathogen that afflicts people and nonhuman primates, and that's reason enough."
PIH is at work in one of the countries most affected by Ebola, Sierra Leone. Farmer described arriving there in 2014 and heading to a hotspot in Port Loko, a few hours from the capital. PIH clinicians helped staff a treatment center in an abandoned school rather than waiting for purpose-built units because the need was so great. Health professionals and family caregivers in this war-torn country were dying alongside the people they were tending to because they "didn't have the staff, stuff, space and systems they needed," he said, citing this as another example of why research, local capacity building and caregiving must be linked.
"You bring local people into the research so they care about it. Fogarty has this as its MO (modus operandi)," Farmer said. "Nowhere in the world are there not people who would like to be deeply involved in research."