Out From Under the Bus | Safe Healthcare Blog | Blogs | CDC

Out From Under the Bus | Safe Healthcare Blog | Blogs | CDC 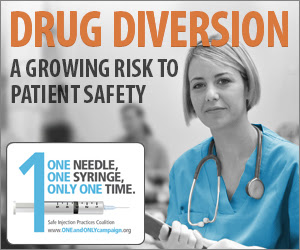 Today, CDC’s Safe Healthcare Blog features guest author Paula Davies Scimeca, RN, MS, CARN, discussing the need for colleagues to report signs of drug abuse among fellow providers. She argues this would protect both providers and patients. Paula cites her firsthand experience with those who lost loved ones to overdoses and are troubled by co-workers who see signs of drug abuse and do not act.
Join the conversation: Safe Healthcare Blog
Visit the One & Only Campaign website and download the Drug Diversion Flyer
Find out more about the risks of healthcare-associated infections from drug diversion

Paula Davies Scimeca, RN, MS, CARN
Guest Author: Paula Davies Scimeca, RN, MS, CARN
Many health professionals believe that reporting a colleague’s alcohol or other drug problem is “throwing them under the bus.” However, most professionals in recovery from a substance use disorder agree that they were already under the bus that was going to run over and kill them. Most experts in peer assistance, including myself, concur that without responsible reporting, the professional may not only die, but harm patients. Yet there is another gallery of voices that must be heard to truly see the impact of this dilemma.
Several years ago, I received an email from a man I never met. He recounted a story I’ve heard too many times. The tale was of a nurse, his 35-year-old fiancée, who was found dead of an accidental overdose at the hospital where she worked. Although the man was still grieving one year after her death, what troubled him most was that co-workers saw signs of her substance problem at work and did nothing.
Moved by these stories, I conducted an on-line survey to capture the experience of those left behind after a nurse dies of an overdose. One survey participant shed some light on the issue, stating, “Behavior that I would be alerted to in a patient I was blind to in a colleague.” However, the total sample of nearly eighty respondents almost unanimously reported that there was awareness of a substance problem in the workplace that was not reported or individuals intentionally turned away from signs of the problem. Indeed, the experience of silence and denial is so pervasive that Monroe and Kenaga wrote an article in 2010 titled, “Don’t Ask, Don’t Tell.”1
This denial has very real implications for patient safety. Countless patients are put at risk of receiving substandard care by impaired nurses including potential exposure to life-threatening infections, such as when a nurse reuses a syringe while diverting injectable narcotics. Intentional blindness to a colleague’s condition clearly violates the American Nurses’ Association’s (ANA) Code of Ethics.2 By following this code, we not only protect colleagues and patients, but also honor the plea of the man who lost his fiancée – that her life not be in vain.
Paula Davies Scimeca, RN, MS, CARN, is a recognized expert on addiction and recovery in nurses. Author of “Unbecoming A Nurse,” she sits on the Nurse Advisory Panel for the New York State Office of Alcohol and Substance Abuse Services and various committees focused on education and prevention of substance use disorders.
Posted on February 2, 2017 by CDC's Safe Healthcare Blog
Categories Healthcare-associated infections, Infection Control and Prevention, Injection Safety
Publicado por salud equitativa en 9:55