Special section on survival finds significant improvement for all but two cancer sites.
NCI
Overall cancer death rates continue to decrease in men, women, and children for all major racial and ethnic groups, according to the latest Annual Report to the Nation on the Status of Cancer, 1975-2014. The report finds that death rates during the period 2010-2014 decreased for 11 of the 16 most common types of cancer in men and for 13 of the 18 most common types of cancer in women, including lung, colorectal, female breast, and prostate cancers. Meanwhile, death rates increased for cancers of the liver, pancreas, and brain in men and for liver and uterine cancer in women. The report finds overall cancer incidence rates, or rates of new cancers, decreased in men but stabilized in women during the period 1999-2013.
The Report to the Nation is released each year in a collaborative effort by the American Cancer Society; the Centers for Disease Control and Prevention (CDC) and the National Cancer Institute (NCI), both parts of the Department of Health and Human Services; and the North American Association of Central Cancer Registries (NAACCR).
The report appears early online in the Journal of the National Cancer Institute (JNCI) and includes a special section, which this year focuses on survival expressed as percentage. It finds that several but not all cancer types showed a significant improvement over time for both early- and late-stage disease, and varied significantly by race/ethnicity and state.
“While trends in death rates are the most commonly used measure to assess progress against cancer, survival trends are also an important measure to evaluate progress in improvement of cancer outcomes,” said Ahmedin Jemal, D.V.M., Ph.D., of the American Cancer Society and lead author of the study. “We last included a special section on cancer survival in 2004, and as we found then, survival improved over time for almost all cancers at every stage of diagnosis. But survival remains very low for some types of cancer and for most types of cancers diagnosed at an advanced stage.”
Compared to cases diagnosed in 1975-1977, five-year survival for cancers diagnosed in 2006-2012 increased significantly for all but two types of cancer: cervix and uterus. The greatest absolute increases in survival (25 percent or greater) were seen in prostate and kidney cancers as well as non-Hodgkin lymphoma, myeloma, and leukemia. 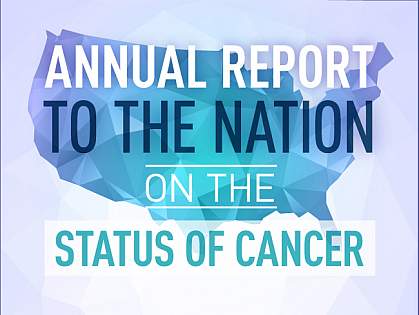 Cancers with the lowest five-year relative survival for cases diagnosed in 2006-2012 were pancreas (8.5 percent), liver (18.1 percent), lung (18.7 percent), esophagus (20.5 percent), stomach (31.1 percent) and brain (35 percent); those with the highest were prostate (99.3 percent), thyroid (98.3 percent), melanoma (93.2 percent) and female breast (90.8 percent).
“While this report found that five-year survival for most types of cancer improved among both blacks and whites over the past several decades, racial disparities for many common cancers have persisted, and they may have increased for prostate cancer and female breast cancer,” said Lynne T. Penberthy, M.D., M.P.H., associate director of NCI’s Surveillance Research Program. “We still have a lot of work to do to understand the causes of these differences, but certainly differences in the kinds and timing of recommended treatments are likely to play a role.”
“This report found that tobacco-related cancers have low survival rates, which underscores the importance of continuing to do what we know works to significantly reduce tobacco use,” said Lisa C. Richardson, M.D., M.P.H., director of CDC’s Division of Cancer Prevention and Control.  “In addition, every state in the nation has an adult obesity prevalence of 20 percent or more. With obesity as a risk factor for cancer, we need to continue to support communities and families in prevention approaches that can help reverse the nation’s obesity epidemic. We need to come together to create interventions aimed at increasing the uptake of recommended, effective cancer screening tests, and access to timely cancer care.”
The authors also stated that more attention and resources are needed to identify major risk factors for common cancers, such as colorectal, breast, and prostate, as are concerted efforts to understand the increasing incidence trends in uterine, female breast, and pancreatic cancer.
“The continued drops in overall cancer death rates in the United States are welcome news, reflecting improvements in prevention, early detection, and treatment,” said Betsy A. Kohler, M.P.H., C.T.R., executive director of NAACCR. “But this report also shows us that progress has been limited for several cancers, which should compel us to renew our commitment to efforts to discover new strategies for prevention, early detection, and treatment, and to apply proven interventions broadly and equitably.”
About the National Cancer Institute (NCI): NCI leads the National Cancer Program and the NIH’s efforts to dramatically reduce the prevalence of cancer and improve the lives of cancer patients and their families, through research into prevention and cancer biology, the development of new interventions, and the training and mentoring of new researchers. For more information about cancer, please visit the NCI website at cancer.gov or call NCI's Cancer Information Service at 1-800-4-CANCER.
About the National Institutes of Health (NIH): NIH, the nation's medical research agency, includes 27 Institutes and Centers and is a component of the U.S. Department of Health and Human Services. NIH is the primary federal agency conducting and supporting basic, clinical, and translational medical research, and is investigating the causes, treatments, and cures for both common and rare diseases. For more information about NIH and its programs, visit www.nih.gov.
NIH…Turning Discovery Into Health®