Since 1959, the National Center for Health Statistics of the Centers for Disease Control and Prevention has collected, analyzed, and disseminated data on the health status of US residents as part of the National Health and Nutrition Examination Survey (NHANES) (19). Each year NHANES surveys a nationally representative sample of about 5,000 US adults in which Mexican Americans and non-Hispanic blacks are oversampled, and weighted analysis is used to generate generalizable estimates. NHANES collects demographic, socioeconomic, dietary, and health-related data that include clinical measures of blood pressure, fasting blood glucose, triglycerides, and high-density lipoprotein (HDL) cholesterol in addition to self-reported medication use for health conditions. We conducted cross-sectional analysis of the NHANES data and examined trends in metabolic syndrome over time by establishing 3 periods; 1988–1994 (first period), 1999–2006 (second period), and 2007–2012 (third period). These periods were chosen to account for the lack of continuous annual data over the entire 24-year period (no data for 1996 through 1998) and variations in the NHANES sampling design over time. Comparisons between periods are appropriate as long as sampling weights and units are accounted for in statistical analyses.
Our analysis included all non-Hispanic white, non-Hispanic black, and Mexican American adults aged 18 or older represented in the NHANES data set during the study period. Adults of other race/ethnicities were excluded because of limited sample sizes and inconsistent categorizations across the survey years; pregnant women were also excluded to reduce bias associated with pregnancy-associated diabetes or weight gain. A total of 51,371 participants during the study period were included in this analysis; 18,552 participants for 1988–1994, 18,445 participants for 1999–2006, and 14,374 participants for 2007–2012. The University of Alabama at Birmingham Institutional Review Board considered this study exempt from review because of the use of publicly available, de-identified data.
We defined metabolic syndrome using the criteria and definition published in the joint scientific statement on metabolic syndrome (18). These criteria defined metabolic syndrome as present when 3 of these 5 components are present: 1) elevated waist circumference (≥88 cm for women and ≥102 cm for men), 2) elevated triglycerides (≥150 mg/dL) or drug treatment for elevated triglycerides, 3) low HDL cholesterol (<40 mg/dL for men and <50 mg/dL for women) or drug treatment for low HDL cholesterol, 4) elevated blood pressure (systolic ≥130 mm Hg, or diastolic ≥85 mm Hg, or both) or antihypertensive drug treatment for a history of hypertension, and 5) elevated fasting glucose (≥100 mg/dL) or drug treatment for elevated glucose. We defined metabolic components using the NHANES questionnaire responses and laboratory responses listed in Appendix A. NHANES did not collect laboratory values for HDL cholesterol for survey years 1999 through 2004. Therefore, we relied on self-report of drug treatment for low HDL cholesterol. In this analysis, we calculated the estimated proportion of adults who met each component criterion and who met the formal definition of metabolic syndrome across the study periods (individuals with missing or unknown data were included in a separate response category).
To assess sociodemographic differences in the prevalence and trends of metabolic syndrome, we included the variables age, race/ethnicity, education, and poverty to income ratio (PIR). Age was assessed as a continuous variable for participants aged 0 to 84 years, and those 85 or older were classified as 85 years of age (NHANES codes individuals 85 or older as 85 years). Race/ethnicity was categorized as non-Hispanic white, non-Hispanic black, or Mexican American. NHANES determined education level by the response to the question “What is the highest grade or level of school completed or the highest degree received?” The education variable was further categorized into less than high school graduate, high school graduate or equivalent, some college, college graduate, or unknown/refused. PIR was calculated as the ratio of total family income to poverty threshold values (in dollars). Persons who reported having no income were assigned a zero value for PIR. PIR values less than 1 are considered below the official poverty line, whereas PIR values greater than 1 are above the poverty level (20).

Figure 1. Prevalence of metabolic syndrome among US adults, National Health and Nutrition Examination Survey (NHANES), 1988–2012. Metabolic syndrome was defined by using the criteria agreed to jointly by the International Diabetes Federation; the National Heart, Lung, and Blood Institute in the United States; American Heart Association; World Heart Federation; International Atherosclerosis Society; and International Association for the Study of Obesity (18). Abbreviation: SE, standard error. [A tabular version of this figure is also available.] 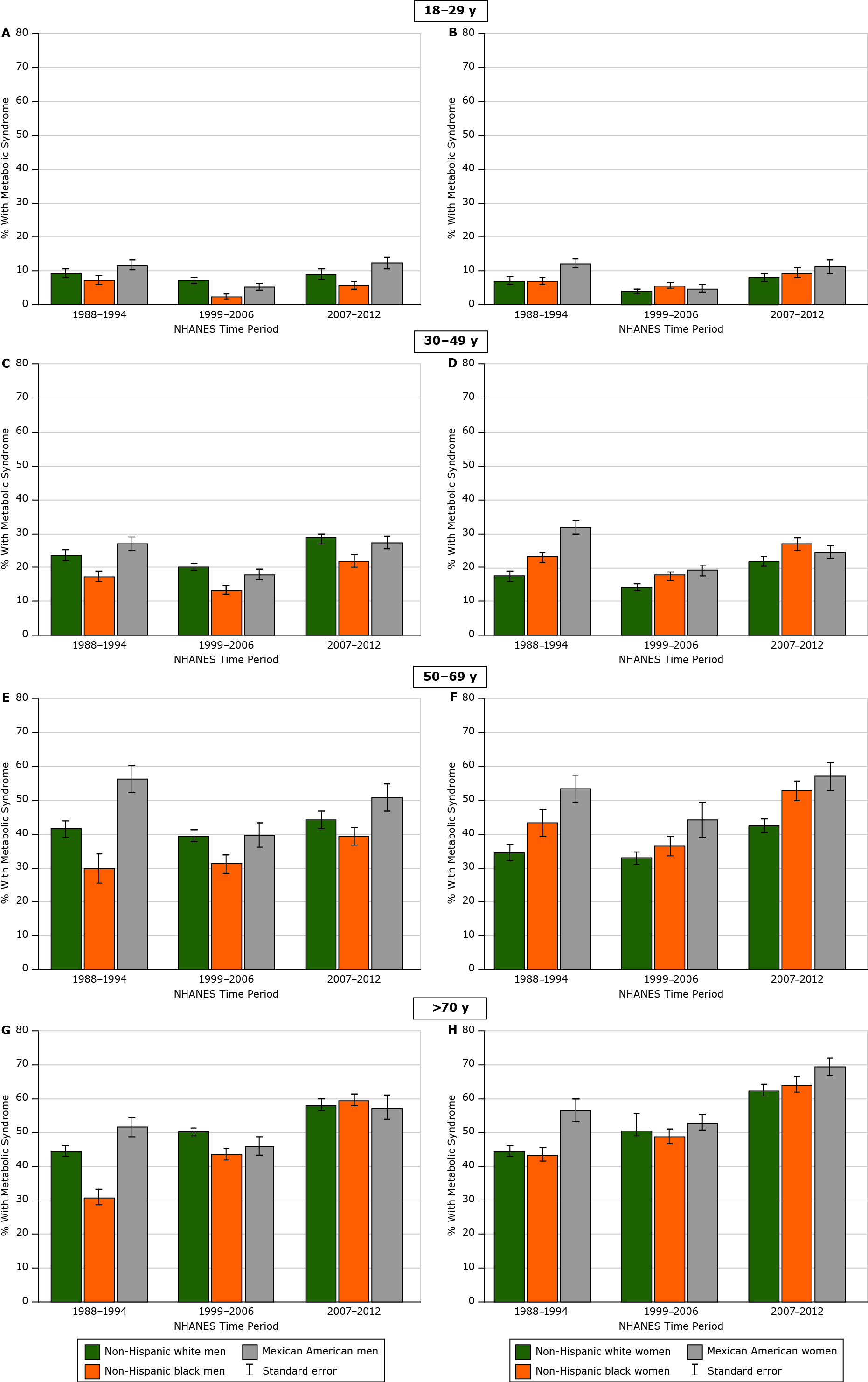