Background
Novel approaches to health care delivery that leverage community resources could improve outcomes for children at high risk for obesity.
Community Context
We describe the process by which we created an online interactive community resources map for use in the Connect for Health randomized controlled trial. The trial was conducted in the 6 pediatric practices that cared for the highest percentage of children with overweight or obesity within a large multi-specialty group practice in eastern Massachusetts.
Methods
By using semistructured interviews with parents and community partners and geographic information systems (GIS), we created and validated a community resource map for use in a randomized controlled trial for childhood obesity. We conducted semistructured interviews with 11 parents and received stakeholder feedback from 5 community partners, 2 pediatricians, and 3 obesity–built environment experts to identify community resources that could support behavior change. We used GIS databases to identify the location of resources. After the resources were validated, we created an online, interactive searchable map. We evaluated parent resource empowerment at baseline and follow-up, examined if the participant families went to new locations for physical activity and food shopping, and evaluated how satisfied the families were with the information they received.
Outcome
Parents, community partners, and experts identified several resources to be included in the map, including farmers markets, supermarkets, parks, and fitness centers. Parents expressed the need for affordable activities. Parent resource empowerment increased by 0.25 units (95% confidence interval, 0.21–0.30) over the 1-year intervention period; 76.2% of participants were physically active at new places, 57.1% of participant families shopped at new locations; and 71.8% reported they were very satisfied with the information they received.
Interpretation
Parents and community partners identified several community resources that could help support behavior change. Parent resource empowerment and use of community resources increased over the intervention period, suggesting that community resource mapping should inform future interventions.
Top

Novel approaches to care delivery that leverage clinical and community resources and address sociocontextual factors could improve outcomes for children at high risk for obesity. Increasing physical activity and improving nutrition (1) can improve children’s weight and well-being. However, clinical obesity interventions targeted at modifying these behaviors have had limited success (2–4). Lack of information about health-promoting resources in communities may have limited the success of these approaches.
Mapping tools such as geographic information systems (GIS) can be used to describe community resources, including access to fresh fruit and vegetables (5), public health services (6), and resources for diabetes and related conditions (7). Interventions for adults designed to promote physical activity have incorporated community resource guides (8,9). Equipping providers with these community resource guides led to enhanced provider counseling about exercise, referrals to community programs, and increased patient physical activity (9). Mapping tools could be used to create searchable online community resource maps for providers and families.
Top

Of the 11 participants in the parent interviews, 9 were the child’s mother and 2 were the child’s father. Nearly two-thirds spoke primarily English at home (100% were fluent in English), 82% had completed at least some college, 45% self-identified as Hispanic or Latino, and 45% self-identified as black. Participants in the Connect for Health trial were also racially and ethnically diverse with 33% identifying as black and 22% identifying as Latino. At baseline, 51% of parents of Connect for Health participants were college graduates.
Interviewees and community partners indicated they wanted a community resource map that included physical activity resources such as parks and playgrounds, fitness centers, walking trails, pools, ice skating rinks, YMCAs, Boys and Girls Clubs of America ( Table 1). They thought that nutrition resources such as supermarkets and farmers markets would be useful to include. Social support programs such as the Supplemental Nutrition Program for Women, Infants, and Children locations, Department of Transitional Assistance offices, and food pantries were also mentioned as important resources. Modes of transportation such as subway and bus stops were also mentioned. Finally, interviewees and community partners reported that street views of the map’s resources would be helpful to allow families to review the condition and safety of the locations. They also wanted map functionality that would provide directions and enable a printable resource guide.
The parents of positive outlier children we interviewed stressed the benefit of affordable, high quality, and nearby opportunities for physical activity and nutritional food in helping their child achieve a healthier weight ( Table 2). One mother described the need for affordable options this way: “I think more things that are free, because me being a single mother . . . I’m always looking for something. If it costs too much you can’t go.” They also said that support from families, neighborhoods, communities, and schools was invaluable. One mother noted that community support was important: “I think the community itself — they encourage kids to do sports.”
Parents identified poor access to healthy food and easy access to fast food as barriers to a healthy weight in their community. Parents noted time constraints and safety issues as barriers to accessing community resources as well as a general lack of information. Parents said a community resource map or a list of resources would make it easier for them to identify locations to help them with their children’s health.
Parents indicated a community resource map would permit them to learn about new options in their community. They said many parents did not know about the healthy resources in their communities, and having 1 centralized database would be useful. They also felt that having the knowledge conveyed through the health coach would be helpful and could bring children together. Finally, they appreciated that they could search on the map for specific resources such as farmers markets.
Among the 341 supermarkets in the Dun and Bradstreet database that we called, 94 (28%) were actually supermarkets. Many (24%) were convenience stores. Others were sandwich shops, meat markets, liquor stores, pizza shops, restaurants, or ethnic-food stores that did not sell fruits or vegetables, and bakeries. Seventy-seven (42%) of the 182 fitness centers we called were actually fitness centers. Forty-five (63%) of the 71 valid fitness centers that we could reach by telephone offered programs for children. Many of the invalid establishments were nail spas, private homes, or no longer open.
The validated resources were placed on an interactive online web platform that is also mobile friendly. Types of resources can be clicked on or off so that health care professionals or families can view all types of resources in their neighborhood or just the type they are looking for. The map is 1 large map (Figure), and users can zoom into their address or neighborhood. The map also offers walking directions to the locations, a search function, and a printable map with the list of the locations, telephone number, address, and other attributes such as dates and times the resource is open. 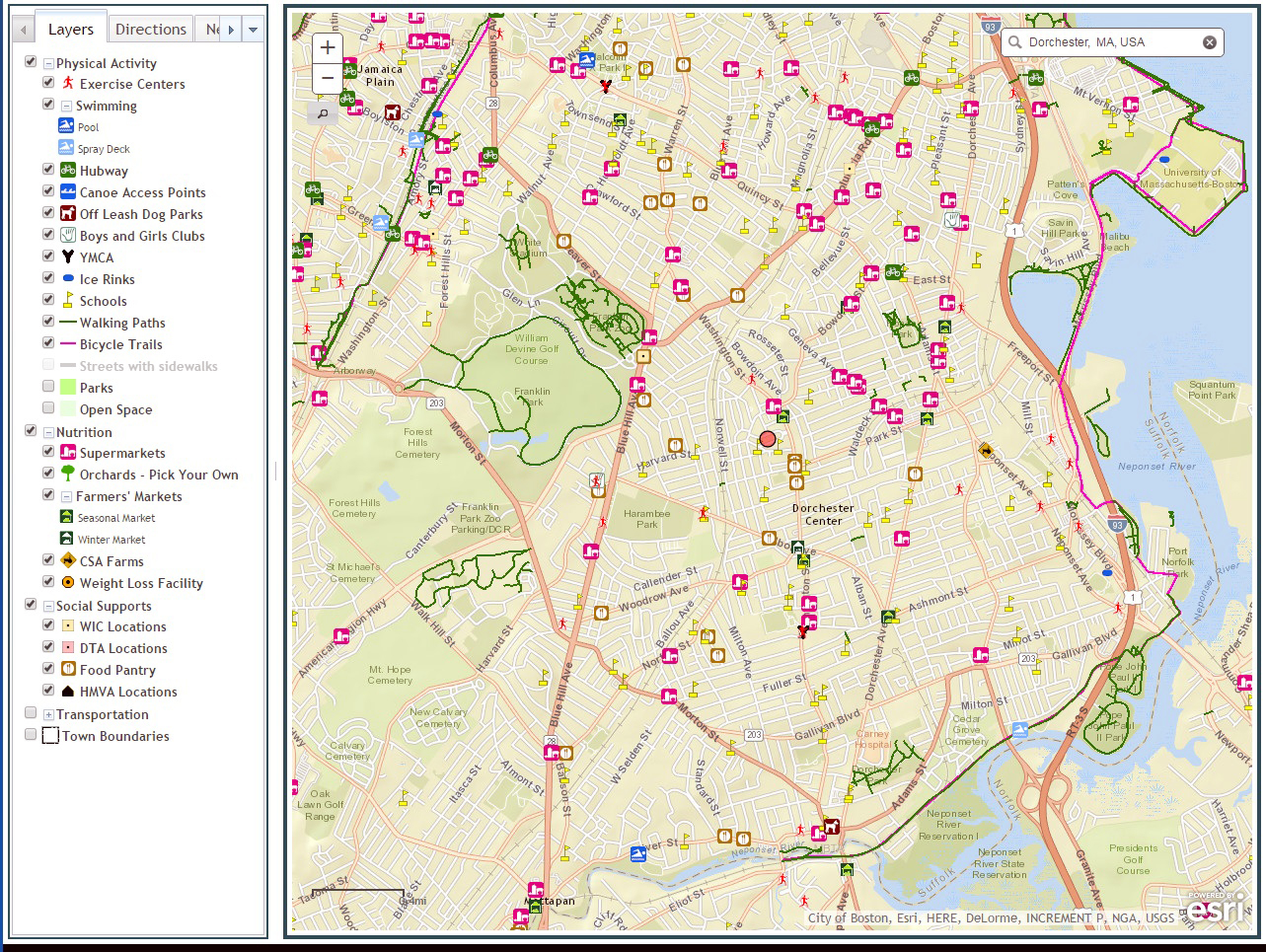 We found that resources for nutrition, physical activity, and social supports were important to parents of children who had succeeded in improving their BMI despite living in obesity hotspots. Community partners and built environment–obesity experts also believed that these resources were important to provide. We also found that families wanted affordable and convenient options for nutrition and physical activity. As has been demonstrated in other built environment research, families found that supermarkets were facilitators in getting to a healthier weight and easy access to fast-food restaurants was a barrier (19,20). They also found parks and playgrounds to be helpful, as demonstrated in previous studies (21,22). After determining what types of locations were important, we gathered resources to create the maps. We found validation of supermarkets and fitness centers to be necessary. Many of the supermarkets and fitness centers provided by Dun and Bradstreet 2013 proved invalid, as in previous studies (14,15). Parent resource empowerment and use of resources increased over the intervention period among study participants, although they did not differ by whether participants received the online interactive map or the mailed community resource guide. Most families were very satisfied with the information on community resources they received, and those who received the map were significantly more satisfied than those who received the community resource guide.
We were surprised that those with access to the interactive map did not increase their resource empowerment more or use more resources than those who received the resource guide. This finding suggests that providing a list of resources in a participant’s or patient’s community is equally as effective as an online, interactive, searchable map. Although families who received the map were more satisfied with the resources they received, the ease of use of a paper copy may be just as beneficial as the more sophisticated GIS map.
Other studies have used GIS to map community resources. The University of Chicago and Kaiser Permanente used GIS to aid with community health needs assessments, including examining access to parks and fast-food restaurants (23,24). However, to our knowledge, no study before ours has designed a map for a randomized controlled trial of childhood obesity, and no other program has mapped such a large number of resources. Other strengths of this study include using stakeholder feedback to choose the resources to show on the map. Finally, parents of positive outliers participated in designing the map. We believe that learning from these families who have reached a healthier weight despite living in obesogenic neighborhoods can inform effective interventions.
Our study had limitations. We interviewed only 11 parents and 10 community partners, so our resources may not be generalizable to other populations. We also used a large commercial database that often has misclassification errors, which required research staff hours for validation and maintenance. Although we validated many of the supermarkets and fitness centers, we were not able to validate the entire map. We also conducted our validation via telephone survey, which may not be as reliable as direct visualization of the business. In the future it may be helpful to have community members participate in this validation and to test the map or test the community resource map with a larger population. Finally, our results may not be generalizable to populations without access to health care or those located outside of Massachusetts.
Novel mapping tools can be used to tailor childhood obesity interventions and link families to healthy and affordable resources in their communities. The ability to validate resources is crucial to provide patients and their families with accurate information on community resources, and engaging key community partners in development can enhance their usability and salience.
Top

This project was funded by Harvard Catalyst Child Health Pilot Grant 8 UL 1 TR000170-05, Patient-Centered Outcomes Research Institute contract no. IH-1304-6739. Dr Fiechtner was supported by a National Institute of Diabetes and Digestive and Kidney Diseases (NIDDK) training grant to the Division of Gastroenterology and Nutrition (T32 DK 007747) and support from the Agency for Healthcare Research and Quality (K12 HS022986). Dr Sharifi was supported by grants K12 HS 022986 and K08 HS024332 and from the Agency for Healthcare Research and Quality. Dr Taveras was supported by NIDDK grant K24 DK10589. Dr Block was funded by a career development award from National Heart, Lung, and Blood Institute (K23HL111211). The content is solely the responsibility of the authors and does not necessarily represent the official views of Harvard Catalyst, Harvard University and its affiliated academic health care centers, the National Institutes of Health, Patient-Centered Outcomes Research Institute, or the Agency for Healthcare Research and Quality. The authors have no competing financial interests. This study was conducted according to the guidelines laid down in the Declaration of Helsinki, and the Partners Institutional Review Board approved all procedures involving human subjects and patients. The abstract of this manuscript was published as part of the proceedings of the 2014 Obesity Week, the annual meeting of the Obesity Society. The Connect for Health trial has been recorded in the clinicaltrials.gov national registry of randomized trials. ClinicalTrials.gov NCT02124460.
Top