By Dr Ananya Mandal, MDMay 28, 2018
A recent review found that male doctors in the United Kingdom receive an average £67,788 in basic pay while female doctors get paid £57,569 a year. The gap is of £10,219 or 15%. Overall the NHS has a gender pay gap of 23%. There are also more women than men working in the healthcare sector. Jeremy Hunt, the health and social care secretary, has taken up the issue and has started an independent review to eliminate this gender inequality. The review is to be headed by Professor Jane Dacre. 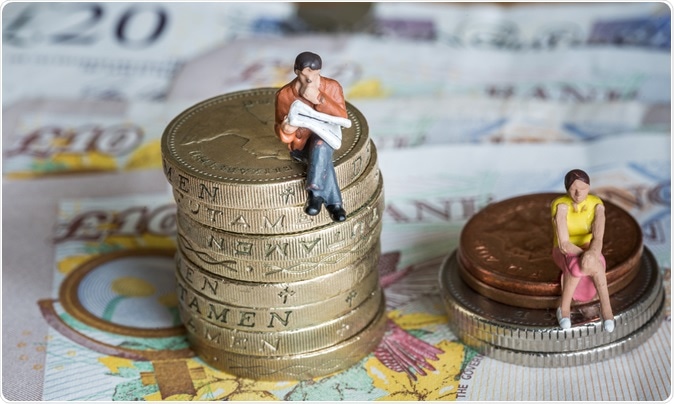 "Gender Pay gap..." - Image Credit: Ian Johnston / Shutterstock
Some of the problems that lead to this gender pay gap according to experts are the fact that women need to take time out for maternity and carer responsibilities at home and thus miss out on opportunities that their male counterparts can take up. This translates into more men at the top of the medical careers. At present there are 31,290 men who are consultants compared to 17,317 women. This means fewer women reach that position than men.
Pay progression also thus is stunted among women because it is based on the time served. Reward payments are also lower for women than for men. Clinical excellence awards that are given to consultant doctors for making improvements in safety and quality of care or in teaching and learning practices are given four times more often to male doctors than women doctors.
According to Hunt, “The NHS holds a unique position in both British and global society as a shining beacon of equality among all, and so it is unacceptable that 70 years from its creation its own staff still face gender inequality. Even today, there remains a 15% gap between the pay of our male and female doctors – this has no place in a modern employer or the NHS and I’m determined to eliminate this gap…I’m delighted Jane Dacre – one of the most highly respected female medics in the NHS – has agreed to lead this important review and is perfectly placed to examine the barriers that stop our talented female doctors climbing to the top rung in the NHS career ladder.”

Dacre is the president of the Royal College of Physicians. She said, “I am delighted to have been asked to lead on this important review into the gender pay gap of 15% in the medical workforce. Previous reports and initiatives have identified many of the root causes, so there is no shortage of evidence about this unacceptable situation…I am grateful for the government’s commitment to act on the recommendations of the review, not just for women doctors now, but for our future workforce. Over 50% of medical school entrants are women, and we owe it to them and their future commitment to the NHS to ensure they are treated fairly.”
In this new review, the team would consider the factors that stop or prevent women doctors from advancing in their medical careers at NHS in manners similar to the male doctors. It would also look at issues such as motherhood and child rearing, parental leaves, flexible timings of work and care arrangements at home including the financial constraints of these arrangements and how they affect the careers of women doctors.
This review is expected to be released at the end of 2018. After its release, it is expected to make changes in the NHS policies across all staff groups and not just doctors, say experts
Publicado por salud equitativa en 8:12