A woman in Zimbabwe has more problems than she can handle. She's HIV-positive, unemployed, has a husband who's violent and threatening to leave, and her 13-year-old daughter has been raped and is pregnant. Overwhelmed, she learns to prioritize her problems and identify solutions by talking with an elderly woman, a lay health worker known as a "grandmother," as they sit on a bench outside a primary care clinic. 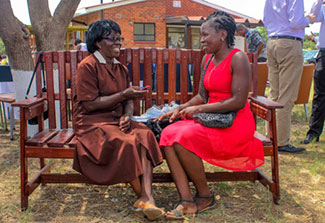 Photo courtesy of the Friendship Bench Program, Zimbabwe
Zimbabwe's Friendship Bench program, developed with partial support from Fogarty, helps reduce the mental health treatment gap by training lay health workers to deliver problem-solving therapy.
That scenario, described by former Fogarty Fellow Dr. Dixon Chibanda, exemplifies the Friendship Bench Program  he helped create to reduce the mental health treatment gap in Zimbabwe, where he's one of 12 psychiatrists in a country of 16 million people. Using a task-shifting approach, clinics refer patients to non-health care professionals trained to deliver problem-solving therapy for anxiety, depression and other common mental disorders in a safe and comfortable setting - a discreetly located bench. The concept is now being adapted for use elsewhere in Africa and even New York City.
The project began in 2006, and with Fogarty support that came later  Chibanda conducted a systematic review of psychological interventions to identify ways to enhance the bench program. The fellowship also helped him prepare for a clinical trial, funded by Grand Challenges Canada, which showed people who experienced the bench intervention were less likely to have symptoms of depression after six months than those who received standard care that included doctors. Now, more than 70 Zimbabwean communities have benches, 400 grandmothers have been trained, and nearly 40,000 people received therapy last year, according to Chibanda.
"Being a psychiatrist, one of the things you immediately realize when you work in this part of the world is there are thousands of people who need your services, but just can't get them," Chibanda said. Tapping elderly lay health workers made sense to him because they are respected and rooted in their communities and could be trained for under $200 dollars.
Grandmother candidates must know how to read, write and use a mobile phone. Then they receive training and are evaluated on their ability to listen, summarize what they've heard and show empathy. They're taught to deliver a talk therapy intervention adapted for the local culture and language, which refers to anxiety and depression as, kufungisisa"thinking too much."
On the first encounter of the six-session program, the participant and grandmother spend an hour working through the three stages of the intervention. "Opening the mind" enables participants to relax and share their story; "uplifting" helps the client prioritize their problems and find solutions; and "strengthening" assures they are ready to tackle their challenges. It's typical for people to present with multiple problems, Chibanda noted, and many are victims of domestic violence, which contributes to depression and suicidal behavior.
"The beauty of the Friendship Bench is that at the end of the very first session, you walk away with a solution and plan that you go and execute. So, when you come back, you come back with feedback," Chibanda explained. Grandmothers are supervised by peers and can contact psychiatrists or psychologists if there's something they can't handle. The biggest challenge with the growing program in Zimbabwe is ensuring the hundreds of lay workers carry out the intervention in the same way, so the staff is working to improve consistency.
Malawi has started a friendship bench program that mirrors Zimbabwe's, according to Chibanda. The concept also is being adapted for use in New York City where permanent and mobile benches are being installed in public places - including health fairs and block parties. People seeking assistance can talk anonymously with trained community workers and peer counselors who provide support and refer them to resources where they can get help. The New York pilot project has been successful with bench workers reporting they've interrupted suicide plans and helped people enter detox programs, according to Takeesha White, who is implementing the program for the city's department of health and mental hygiene.
The idea of importing the African innovation came from Health Commissioner Dr. Mary T. Bassett, who had worked in Zimbabwe and suggested adapting friendship benches as part of the city's major mental health initiative, ThriveNYC. White used the Zimbabwean manuals as a resource for training workers and frequently consults with Chibanda and psychologist Dr. Ruth Verhey, who recently saw the city's program while visiting New York.
"The one thing that really resonated with me, these stories that are coming out of New York are no different than the stories coming out of Zimbabwe with regard to the people coming to the bench and the experience that the benchers and the counselors have," said Chibanda. "It's all about stories, powerful stories, which are embedded in an evidence-based approach that seeks to truly empower clients who come to the bench."