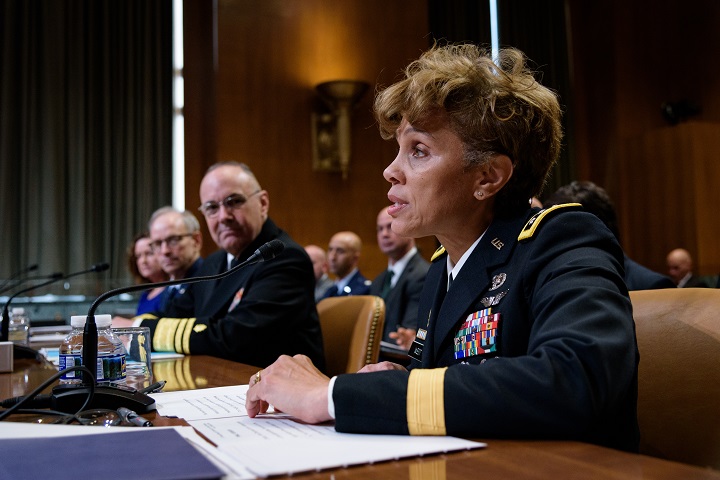 
FORT GEORGE G. MEADE, Md. — To help modernize the DoD's medical community, the Army's surgeon general, along with the other services, have been taking the necessary steps to migrate certain authorities and control from the military departments to the Defense Health Agency.

In accordance with the 2017 National Defense Authorization Act, the changes to the military departments aim to eliminate duplicative health services functions and maximize efficiencies in the activities carried out by the Defense Health Agency.

"Army Medicine has the opportunity to make significant improvements in healthcare as we implement the 2017 NDAA changes, which will influence how we sustain readiness," said Lt. Gen. Nadja Y. West, the Army Surgeon General, and commanding general of the U.S. Army Medical Command, during testimony before the Senate Appropriations Committee recently.

Eventually, the DHA will be responsible for the administration of each military treatment facility, including budgetary matters, information technology, health care administration and management, administrative policy and procedure, military medical construction, and other appropriate matters, according to the law.

Secretary of the Army Mark T. Esper and Chief of Staff of the Army Gen. Mark A. Milley have established a task force to ensure a successful transition, West said.

Womack Army Medical Center at Fort Bragg, North Carolina, will be the first facility impacted by the change.

"We are working closely with the Defense Health Agency and the rest of the joint health services enterprise to implement these legislative changes, with thorough analysis, deliberate planning and ongoing coordination," West told senators.

West also addressed the Army's fiscal year 2019 funding request and budget justification. She was joined in her testimony by the Navy and Air Force surgeon generals and the program executive officer for Defense Healthcare Management.

"We wholeheartedly support the transition efforts and will continue to work diligently with our joint health services enterprise colleagues to implement NDAA requirements while improving medical readiness, meeting the operational requirements of our combatant commanders and providing quality healthcare to our patients," West said.

A CULTURE OF READINESS

In addition to the changes to the Army medical department's organizational structure, the Army medical community has been working to ensure that Soldiers achieve the proper levels of both physical and mental fitness, so that they are always ready to deploy anywhere in the world.
The Army has operationalized and disseminated the "Performance Triad" throughout the service, West said. That initiative focuses on optimizing sleep, nutrition, and activity to ensure Soldiers operate at peak performance.

"We have enhanced individual and unit readiness in several ways, to include: leveraging our health and readiness data, an electronic profile system and embedding athletic trainers and physical therapists at the unit level," she said.

"Medical readiness is a shared Soldier and command team responsibility. However, Army medicine plays a decisive role in monitoring, assessing, and identifying key health-related indicators and outcomes, as well as providing recommendations to mitigate risks," she said.

In addition, Army medicine has implemented its "Medical Readiness Transformation Initiative" to stay in line with the Defense Secretary's priority to decrease the quantity of non-deployable personnel. The Army's program aims to increase the readiness of the total force by reducing the number of "Soldiers in the most severe non-deployment category."

As a result, West said, the total force has achieved the lowest non-deployable rate in our history. Additionally, she said, "the medical readiness of the total Army consistently improved over the past 12 months, and the Army exceeded the DoD goal."

Army Medicine has improved their comprehensive pain management program to help reduce a Soldier or dependent's reliance upon opioids or other pain medications, the general added. To accomplish this, Army medicine has implemented a combination of traditional and non-traditional pain management methods to help those suffering from acute and chronic pain.

"Over the last two decades, Army Medicine has transformed its pain management strategy with great success," West said. "Chronic use of opioids peaked in FY 2007, and with our pain management program we have seen a 45 percent decrease in use between FY 2012 and FY 2016. In FY 2016, Opioid Use Disorder in the active duty Army was 0.15 percent compared to 0.90 percent in the U.S. adult population. Our pain management program is integral to sustaining this process by providing quality care, mitigating suffering and returning Soldiers to the fight."

In addition to pain management mitigation, the Army has made several innovations to improve how healthcare is delivered.

First, the Army's embedded behavioral health program assigns providers to operational units. Overall, the use of behavioral health care increased from about 900,000 encounters in FY 2007 to over 2.25 million in FY 2017, West said.

"It's not that there's more pathology," she said, explaining that people just feel more comfortable using behavioral health practitioners since they are now local.

The general said the Army has also seen a decrease in hospital admission rate, by about 41 percent.

"So, [that's] 69,000 less admissions for acute behavioral health because we've been able to handle it at the local level and intervene earlier before it becomes an admittable condition," she said.

Second, West said the Army has expanded its virtual health capabilities to span 30 specialties, delivered in 18 time zones, in over 30 countries and territories.

In response to Hurricane Maria, for instance, the Army linked virtual health capabilities in Puerto Rico with Army clinicians in Texas and in Georgia. With these virtual capabilities, she said, the Army can remotely coach first responders at the point of injury on special lifesaving trauma and advanced burn care techniques.

Finally, the Army's Behavioral Health Data Portal provides practitioners the ability to provide quality care by enhancing the service's "ability to monitor clinical outcome metrics and refine behavioral health programs based on their metrics," West said.
Disclaimer: Re-published content may have been edited for length and clarity. Read original post.

Occupational therapists showcase their grasp for your grip

Occupational therapists use a holistic approach to rehabilitate and treat physical, psychological and even emotional injuries
Recommended Content:
Military Hospitals and Clinics

Ready, set, focus: Finding calm in a storm through the power of breathing

At the time of entry into military service, many members of the U.S. Armed Forces are young, physically active, and in good physical health. However, following entry, many service members develop or are discovered to have risk factors for cardiovascular disease (CVD). This report documents the incidence and prevalence of select risk factors for CVD ...
Recommended Content:
Health Readiness | Armed Forces Health Surveillance Branch | Epidemiology and Analysis | Medical Surveillance Monthly Report

Eat an apple a day, but don't keep the dentist away