State-Specific Deaths and Medical Costs due to Older Adult Falls
Falls remain the leading cause of injury-related death among older Americans. Two new recently released journal articles provide data and methods on state-specific deaths and injury costs from falls among older adults (65 and older). Given the growth in the older adult population and surge in older adult falls occurring across the United States, it benefits state decision makers and public health professionals to calculate fall-related deaths and healthcare expenditures related to fall injuries. This can help states make informed decisions about how to prioritize fall prevention efforts and promote healthy aging. Although falls are common, they are preventable by using effective state-driven clinical and community strategies. 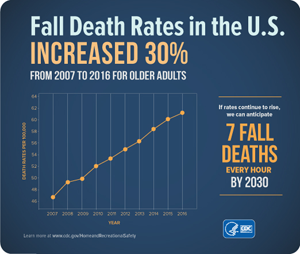 New Data on Rates and Trends of Fall Deaths
A new Morbidity and Mortality Weekly Report (MMWR)article describes the trend in fall death rates among older adults by select demographics and by state from 2007 to 2016. Overall, the age-adjusted death rate increased more than 30%, with deaths increasing from 18,000 in 2007 to nearly 30,000 in 2016, which equates to 81 deaths per day. If deaths from falls continue to increase at the same rate, we can expect 59,000 older American deaths from falls in 2030, which is 162 deaths each day, or 7 deaths each hour in the U.S.
Calculating Economic Burden Related to Falls by State
A study published in the Journal of Public Health Management and Practice (JPHMP), describes two methods to estimate state-level direct medical spending due to older adult falls and explains their differences, advantages, and limitations. The first method applied a national attributable fraction to the total state health expenditure accounts in 2014 by payer type (Medicare, Medicaid, and private insurance). The second method obtained 2014 state data of older adults treated and released from an emergency department and those hospitalized due to a fall injury to calculate lifetime costs due to fall injuries requiring medical treatment. States are able to use these provided methods annually to quantify their state-specific expenditure on this common public health issue.
Older Adult Falls Prevention Resources
Publicado por salud equitativa en 8:34