Regular exercise participation is associated with lowered risk of premature mortality and chronic health conditions (1). Despite this knowledge, exercise participation remains low. Less than half of US adults meet the current guidelines for moderate-to-vigorous physical activity (≥150 min/wk of moderate, 75 min/wk of vigorous physical activity, or a combination) (2), and participation varies by region (3) with less physical activity in southern and western states.
Understanding why exercise participation varies by location must include an examination of the built environment (2,4). Most people exercise in their neighborhood, making accessibility to locations for exercise especially important (5). Those with gyms, neighborhood parks, or other recreational facilities in close proximity to their homes or work places are more likely to exercise (6–8). Although many different methods of systematically measuring the built environment exist, there is little consensus on which is the most appropriate.
The choice of a built environment measure for exercise is difficult because no standard measure exists. Giles-Corti et al (9) and Rutt (10) measured the distance from individual homes to the nearest recreational facility while others, such as Dill (11), focused on transit measures. Recreational facility density (12) or the ease of walking to specific locations such as parks (Walk Score) have also been used (13,14). Other methods, such as the ParkScore, which estimates the percentage of the population who are within a 10-minute walk of a well-maintained park, have been used as well, making a consensus for a comparable measure at different geographic levels difficult (15). Because of this lack of consensus, a new measure of access to exercise opportunities, measured at the county level, with national coverage, was created for the annual release of 2014 County Health Rankings & Roadmaps (www.countyhealthrankings.org) to address this research gap.
The County Health Rankings ranks counties within states on their current (Health Outcomes) and potential (Health Factors) health. One Health Factor area examined in the Rankings is Diet and Exercise. This Health Factor area includes measures of obesity, physical inactivity, and the food environment. We felt it was important to highlight the role that the built environment plays in providing opportunities for exercise. So, we developed a measure intended to provide communities a starting point for discussions on improving their county’s infrastructure to enhance exercise opportunities. In 2014, the County Health Rankingsintroduced the access to exercise opportunities measure, providing a nationally available county-level measure. The measure incorporates both park and recreational facility data to create a comparable county-to-county measure of access and the first to adjust for the differing needs and transportation patterns between urban and rural areas. We describe the development of the access to exercise opportunities measure, available at www.countyhealthrankings.org, and provide descriptive results.
Top of Page

Box. Complete List of Lands or Facilities Included as a Park or Recreational Facility in the Access to Exercise Opportunities Measure

The following land designations are included as parks:

Population data were obtained from the US Census Topologically Integrated Geographic Encoding and Referencing (TIGER)/Line Files for the 2010 census at the census block level. These spatial data are available for download on the census website and were joined with American Community Survey demographic data (18).

First, using ArcGIS (Esri), buffers of one-half mile were created around parks identified from the Esri and DeLorme data sets. The buffer process was repeated using 1-mile buffers in urban and 3-mile buffers in rural areas around recreational facilities identified from the OneSource Global Business Browser data set. Urban/rural status at the census-tract level was determined by using ordinal data from the US Department of Agriculture Food Environment Atlas (19). All census blocks within a census tract were assigned the same urban/rural code. Counties without information on parks or recreational facilities in any of the 3 data sets were assigned missing values (n = 30).
The newly created buffer files were intersected with US Census TIGER/Line Shapefiles to assign census block population data (18). To identify census blocks with access to exercise opportunities, an indicator variable was created for census blocks where at least 1 of the buffered locations for exercise overlaps the census block. Then census block files were aggregated to a county level to obtain the final measure using SAS version 9.3 (SAS Institute, Inc). The final measure is the percentage of individuals in a county with access to an exercise opportunity. The formula used for the calculation was as follows:
[(Sum of Census Block Populations With Access to an Exercise Opportunity) ÷ (Sum of All Census Block Populations)] × 100

Construct validity of the access to exercise opportunities measure was explored using Spearman rank correlations to examine its association with other County Health Rankings measures sharing similar theoretical constructs. These included premature mortality (years of potential life lost before age 75), 3 quality-of-life measures (percentage of adults reporting fair or poor health and the average number of physically and mentally unhealthy days reported in the past 30 days), obesity (percentage of adults that report a body mass index ≥30, measured as weight in kg divided by height in m2), and physical inactivity (percentage of adults reporting no leisure-time physical activity in the past 30 days). Additional demographic analyses investigated potential associations between access to exercise opportunities and urban/rural area or income. The access to exercise opportunities measure was also aggregated to US state and census region to facilitate comparisons across the country.
Top of Page 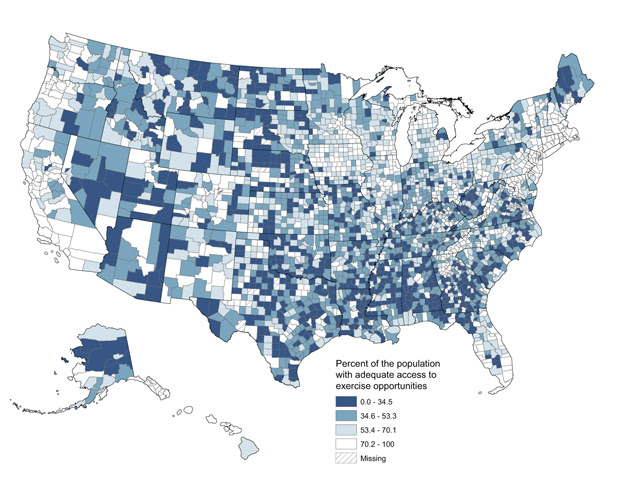 Figure 1. County-level distribution of access to exercise opportunities. [A text description of this figure is also available.]

Support for this work was provided by a grant (no. 69835) from the Robert Wood Johnson Foundation for the development of the County Health Rankings. The authors acknowledge the advice and helpful comments from Bridget Catlin, PhD, MHSA, co-director of County Health Rankings & Roadmaps.
Top of Page