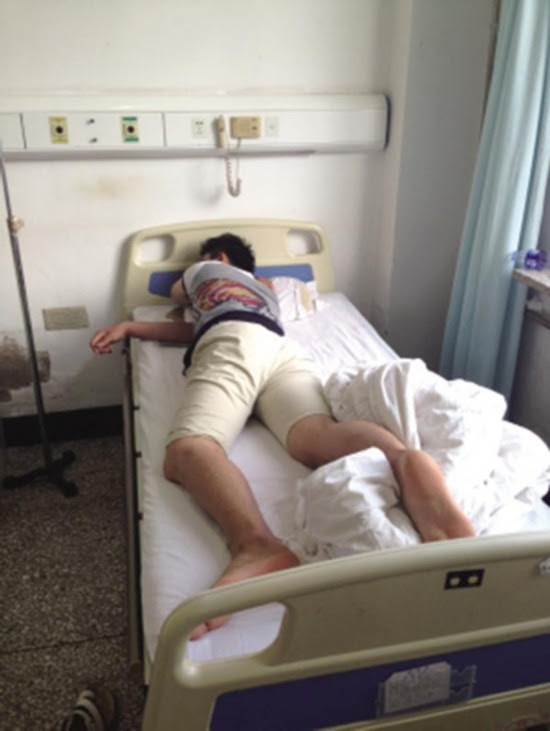 Mr Wang recovering from his operation. From China Daily
If you were searching for evidence that medical paternalism exists in China, search no more. It appears that China, or at least in Shenyang Hunnan Xinqu Hospital, the gentlemen in white coats do know what is best for you. Absolutely.

What demonstrates this beyond dispute is the experience of Mr Wang, a young man who was eagerly awaiting the birth of his first child in a hospital waiting room. Suddenly a doctor beckoned him to follow, surely, thought Mr Wang, to stand at the bedside of his wife after her Caesarean.

Alas, no. He entered an operating room and was told to drop his trousers. This was not what a father-to-be expects on the birth of his child, so, like legions upon legion of patients down through the ages, he asked, “Why?”

And, as he recalls, “'They said: "Just do what we tell you". Like legions of doctors down through the ages.

The trouserless Mr Wang was then placed on the operating table and the doctors proceded to remove his haemorrhoids. After administering anaesthetic, of course.

“I really never knew I had haemorrhoids,” the 29-year-old said. “When I was on the operating table I heard a baby crying and I was very happy, and I wanted to hold it. But I couldn't move because I started to feel pain.”

The hospital has offered 5000 Yuan as compensation (US$750) for the mistake.
- See more at: http://www.bioedge.org/bioethics/medical-paternalist-lives-on-in-china/11952#sthash.VA4E9qWS.dpuf