It's not just about the number of young people. 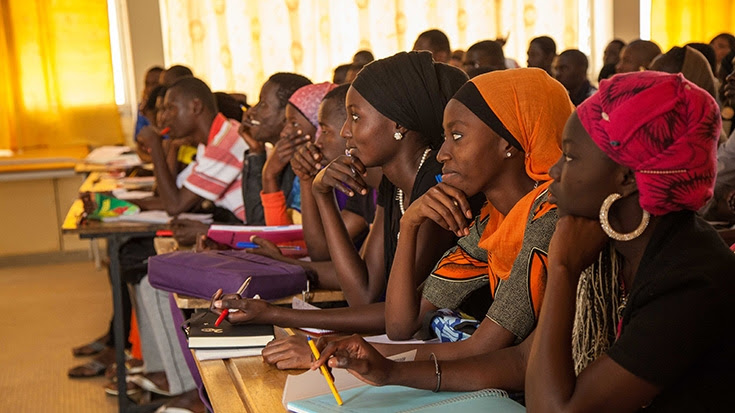 One of the ideas swirling around in the area of demography is a country’s “demographic divided”, the benefit that a country gains by having a young population: a large pool of workers to support a smaller dependant population. China enjoyed this demographic dividend in the last three decades or so and India seems to be currently enjoying it. With most of the world’s population growth to come from Africa this century, there is reason to think that it is that continent’s turn to reap the demographic dividend. The numbers are eye-catching: 43% of sub-Saharan Africa is younger than 15 years old, about 66% are below 25. Africa will account for nearly all of the growth in the world’s labour force by 2100, and its share of the global labour force will grow from 10 to 37 per cent!
However, as this report demonstrates, having a large, young, working-age population is not the only requirement – that young population also needs to be in work. And that requires that the jobs are there to be filled and that the young people have the necessary skills to fill them. After all, it is of no economic use to have large numbers of young people who either have no skills, or no jobs to use their skills in.
Unfortunately, in Africa, there are a large number of problems in converting the numbers of young people into a demographic dividend. At the moment, youth unemployment is four times that of adult unemployment across the continent – and in some countries (South Africa) youth unemployment is sitting at 51%. Although across the continent more than half the youth work, an International Labour Organisation survey showed that often the quality of that employment is poor and often vulnerable, like subsistence agriculture and informal self-employment in the services sector. The Brookings Institution has reported that only 28 per cent of workers have stable, wage-paying jobs.
As the New Security Beat report notes:
“To address un- and under-employment rates, job creation efforts will be needed at an unprecedented rate: about 18 million a year across the continent between 2010 and 2035. Increasing manufacturing and global trade will be essential to achieve this. Focusing on low-skilled industries can provide jobs to the poorly skilled out-of-school population in addition to providing more resources to invest in the education system to prepare youth for higher-skilled positions.
A recent Overseas Development Institute report identifies a number of promising manufacturing subsectors including garments and textiles, agro-processing and horticulture, automobiles, and consumer goods.”
At the same time, the skills that the young people are given in school need to be what employers want in their workers. Another Brookings Institution report found that many African countries' were not teaching many “21st century skills” such as “critical thinking, teamwork and cooperation, communication, self-control, perseverance, and collaborative problem solving”. Although primary school enrolment rates have increased dramatically to 80% by 2012 under the Millennium Development Goals and the Education for All movement, secondary school enrolment rates were much lower. In all, 121 million young people of school age in the continent were not in school in 2012. (I do wonder how many of those young people were helping the family by working on the farm or in the business etc as used to be common everywhere until 120-odd years ago?)
Further, it is important to realise that merely getting children into the classroom is not enough. Solutions must focus on the quality of the education received as well as the numbers.
“Evidence shows that differences in learning outcomes – not schooling levels – explain variations in economic growth across countries. In fact, the high-level learning achieved in East Asia during its demographic bonus years helps explain the difference in economic growth from 1960 to 2000 compared to Latin America, which had similar levels of school completion but lower levels of learning.”
If the twenty-first century is to see Africa gain a demographic dividend, then it will need to equip its expanding young population to become the workforce of tomorrow. And if the rest of the world's population ages and fails to reproduce itself, then the consequences of Africa not doing so will be felt beyond the continent to the rest of the world.

Well, the US election results are in at MercatorNet and some are quite surprising. You can see from the heading below whom readers would vote for, or not – but don’t jump to conclusions about which party they belong to.
What’s amazing is that readers are almost unanimous on the big questions – about where America is heading and about the country’s leadership. Something to mull over, and comment on if you feel moved to.
I can’t help thinking, though, of all the people in the world who don’t have the luxury of pondering whom to vote for in a free and peaceful country. So many people in Syria, for a start, who don’t know whether they are going to survive the next bombing raid or be able to feed their families. Let’s hear from the American presidential candidates how they are going to stop this shocking war, not how they are going to win it.