Is globalisation the enemy of the people?

A political economist explains why the integration of markets is not in itself a bad thing.

By Guillaume Paumier - Own work, CC BY 3.0 via Wikimedia
In the wake of the British majority vote in June to exit the European Union, then US presidential contender Bernie Sanders wrote in the New York Times: “Could this rejection of the current form of the global economy happen in the United States? You bet it could.” This would be in response to unemployment, a fall in the value of wages, and poverty – trends making inroads into the middle class. Many Americans and others around the world would support his call for “an economy that protects the interests of working people, not just Wall Street” and the “1 percent”.
MercatorNet asked political economist Samuel Gregg, Research Director at the Acton Institute and author of a number of books on free trade and free markets, whether it is globalisation or something else that is undermining national economies and many working people today.
* * * * *
MercatorNet: Do you agree that globalisation – or at least the current form of it – is hurting a lot of people? Is Brexit the answer?
Dr Gregg: The evidence is very clear that economic globalization has helped reduce poverty at an unprecedented rate throughout the world, especially in developing nations. So, overall, it is helping people, particularly the poor. That said, it’s true that economic globalization, by which I mean the ongoing integration of markets around the world, has introduced considerable disruption into some developed nations. Some types of work in developed nations have thus changed significantly. Not everyone is well-equipped to deal with such changes. The great advocate of free trade, Adam Smith, underscored this point. And change and uncertainty often provokes frustration and anger. Those who work in the realm of political economy like myself who are advocates of free trade and free markets need to give more attention how to address this real issue, but without undermining the process of global economic integration.
Brexit was, in part, a reaction against another type of globalization: that of the spread of largely unaccountable international bureaucracies, such as those in the EU, which have been seeking to limit nations’ freedom of action. One of the major reasons why people in Britain voted to leave the EU was because they were fed up with top-down direction from (1) officials in Brussels who, by word and deed, have shown little but contempt for the views of anyone who questions their vision of Europe, and (2) those members of their own national political elites who share many of the same attitudes of their counterparts in Brussels.
But Brexit is also quite compatible with economic globalization. Economic globalization is rendering trade blocs such as the EU increasingly irrelevant. Britain now can chose to trade freely with whoever it wants, instead of waiting for every single member of the EU to agree. 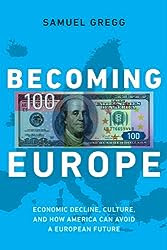 Your 2013 book, Becoming Europe: Economic Decline, Culture, and How America Can Avoid a European Future, suggests Europe hasn’t much to offer America either. What’s wrong with Europe? Has the European Union made it worse?
There’s a great deal wrong with Europe right now, just as America is also in a relatively unhealthy state. But If I was to sum up the problems of Europe, which especially manifest themselves in their sclerotic economies, I think that they ultimately come down to culture: by which I mean beliefs and attitudes. Much of Europe has opted for security-through-the-state, which is something the state cannot provide indefinitely and which ultimately corrodes the foundations of freedom. And looking even more deeply, a great deal of Europe has essentially rejected its Judeo-Christian roots, thus separating themselves from the single most important shaper of European culture. When you uproot yourself from a cultural source that has made your civilization great, there can only be negative consequences.
The EU has made things worse because it encourages the myth of security-through-the-state, and because plenty of people working in the EU really believe in a type of Kantian perpetual peace through international institutions as a substitute for the deeper, more authentically European linkages that gave Europe its distinct identity.
Were Robert Schuman and other high-minded people who worked for an economic community in Europe in the post-war period, starting with the coal and steel industry, mistaken in some way?
From the beginning, there was a tension in the forces working for European integration. One group was primarily interested in economic integration, which didn’t imply a type of European super-state. Another group, however, were very much interested in creating a supra-national entity that would steadily extinguish national sovereignty. For a long time, their interests coincided, but that started to break down after the defeat of Communism. European economic integration, as the free market economist and passionate European Wilhelm Röpke pointed out long ago, doesn’t require a supra-national state. Brexit, I suspect, will demonstrate that point.
Sanders says the US should reject free trade policies, including the Trans-Pacific Partnership, and move to “fair trade”. Is fairness a concept that applies to trade and other economic exchanges?
Much depends upon what is meant by “fair.” I would argue that free trade is fair trade. By “fair trade,” Senator Sanders means subsidies and tariffs to specific groups so that, he believes, they can compete in the marketplace. But there are several problems with this. First, tariffs and subsidies actually constitute economic privileges for those groups that are not accorded to others. That is not just. Second, those who secure such privileges usually do so because they have access to politicians and legislators that others don’t. That is not just. Third, tariffs and privileges lock politically weaker groups - such as industries, businesses, and entrepreneurs in  developing nations - out of global markets. That is surely unjust.
Certainly, the demands of justice are applicable to trade and the economy more generally. But I think justice in the economy first and foremost concerns the establishment and maintenance of rule of law and basic property rights: something that all peoples and nations need if they are to be free to develop economically, compete, be entrepreneurial, and escape poverty. 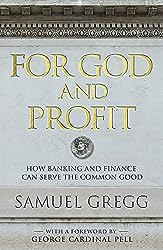 Your latest book, For God and Profit: How Banking and Finance Can Serve the Common Good, will have been greeted in some quarters with scepticism since the financial sector seems to remain the most despised and criticised part of the economy following the meltdown of 2008. What is the argument of this book?
The book argued that, for all the obvious problems which characterize these areas today, finance and banking are not just essential for economic development, but morally legitimate vocations through which one can do much moral and economic good. I try to show that these institutions first emerged in the medieval world of Catholic Europe and played a crucial role in causing the West to move ahead economically. I also outline what I think is a theoretical framework, rooted in Christian ethics and natural law, that enables us to think coherently about the role of finance and banking in the economy. I then apply this to the various problems characterizing the modern world of finance.
What do Christians need to understand before they start talking about “Wall Street”?
The first and most important prerequisite is to actually understand how the financial sector works. Too many Christians and other people of faith make statements about the financial sector which indicate that they really don’t understand the nature and workings of financial tools such as derivatives, short-selling, or even something like interest-rates.
The sixteenth century Spanish Jesuit, Luis de Molina, analyzed financial subjects ranging from coinage to taxation, bank deposits, and money exchanges more generally. But he made sure that he consulted those actually engaged in these practices: people whom he recognized would have insights likely to escape a theologian’s attention. “The practice of the merchants,” he wrote, “makes a better estimation of goods than the scholastic doctors, and the merchants’ judgment is rather to be abided by about the value of the goods, especially when they are used in the business they do with one another.”
It is perfectly reasonable for Christians to engage in critical analysis of the modern financial sector. We need to bring salt and light to that part of the vineyard. But just as a bioethicist should understand the basics of biology, so too should those who want to discuss the moral dimension of finance understand the basic tools of modern finance.
Still, there are problems in the financial sector. What is the biggest problem in your view?
There are many problems, ranging from counter-productive regulations to what I think is an increasingly dysfunctional central banking system. But perhaps the most significant problem is the prevalence of what’s called “moral hazard” throughout the world’s economies. Moral hazard concerns those circumstances, policies and institutions that encourage individuals and businesses to take on excessive risk, most notably with assets and capital entrusted to them by others, because they safely assume they will not pick up the bill for any failure. Hence, while profits remain private, losses are socialized. The higher the extent of the guarantee, the greater is the risk of moral hazard.
A good example of how this occurs through government institutions may be seen in central banks. They assume the role of providing liquidity—either directly and/or through organizing private banks, or open-market operations—when a banking system has apparently run out of liquidity. A defining characteristic of a central bank is that lenders of last resort cannot go bankrupt. The difficulty is that the very existence of a lender of last resort can encourage private financial actors to imagine that they are “too big to fail.” Indeed, if they possess enough systematic presence in a given financial system, they have reason to assume they will be provided with liquidity by a central bank if a failed endeavour threatens their solvency, no matter how foolish or irresponsible their behaviour. As a result, such financial actors will become complacent and take risks which become increasingly irresponsible over time.
Can virtue be found in the world of finance?
Yes! As well as central virtues such as prudence and fortitude, there’s a specific virtue associated with the use of money and capital. Saint Thomas Aquinas speaks of the virtue of “magnificence.” He defines this as the virtue of “that which is great in the use of money.” It is not so much about charity. Nor, Aquinas adds, does the person who embraces this virtue “intend principally to be lavish towards himself.” Rather, he says, magnificence concerns “some great work which has to be produced” with (1) a view to the good that goes beyond the immediate gain, and (2) which cannot be done “without expenditure or outlay” of great sums of money.
Moreover, magnificence for Aquinas also concerns “expenditure in reference to hope, by attaining to the difficulty, not simply, as magnanimity does, but in a determinate matter, namely expenditure.” Here, we find an underappreciated basis for understanding finance as a vocation.Magnificentia isn’t so much about who owns the wealth. As Aquinas specifies, the poor man can also choose to do great things. Rather, it is about the one who deploys great sums to help realize a “great work.” Moreover, Aquinas links the act of magnificence to one of the three great theological virtues: the act of hope. This is especially relevant to finance, for without hope—the expectation of, and firm confidence in, positive outcomes, even in conditions of uncertainty—the entire world of finance would slowly crumble from within.
Dr Samuel Gregg is Research Director at the Acton Institute and author of many books on ethics and political economy, including Becoming Europe: Economic Decline, Culture, and How America Can Avoid a European Future (2013) and For God and Profit: How Banking and Finance Can Serve the Common Good (2016).