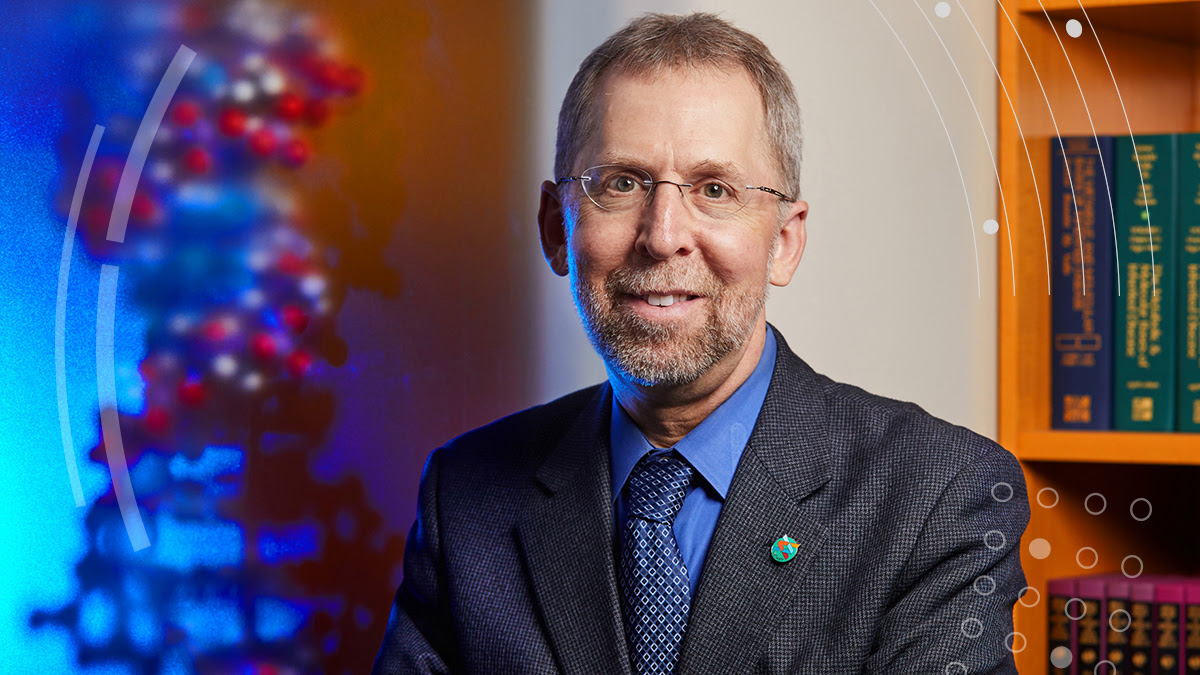 On May 18, 2018, Washington University in St. Louis awarded an honorary Doctor of Science degree to Eric D. Green, M.D., Ph.D., in recognition of his contributions to the field of genomics and its application to medicine. Dr. Green, director of the National Human Genome Research Institute (NHGRI), received the degree during the university's 157th Commencement ceremony. NHGRI, part of the National Institutes of Health, is the driving force for advancing genomics and accelerating scientific and medical breakthroughs that improve human health.
Dr. Green was born into a family of scientists and physicians. His father, the late Maurice Green, Ph.D., pioneered the field of molecular virology in his six decades at St. Louis University School of Medicine. Dr. Green's brother is a molecular biologist and cancer researcher at the University of Massachusetts Medical School, and his sister is a pediatrician. Dr. Green joined the 'family business' after graduating with medical and doctoral degrees from Washington University School of Medicine in 1987, the same year the term 'genomics' was coined.
In 1992, he was appointed assistant professor of pathology and genetics as well as co-investigator in the Human Genome Center at Washington University. For over two decades, Dr. Green's research program was at the forefront of efforts to map, sequence and understand mammalian genomes. His work included significant, start-to-finish involvement in the Human Genome Project, the international effort that first mapped and sequenced the human genome.
From 1994-2010, he was a member of the Intramural Research Program of the National Center for Human Genome Research, later renamed the National Human Genome Research Institute. During that time, he founded and directed the NIH Intramural Sequencing Center (NISC), established a program in comparative genomics that involved the generation and analyses of sequences from targeted genomic regions in evolutionarily diverse species, and identified several human disease-related genes, including those implicated in certain forms of hereditary deafness, vascular disease, and inherited peripheral neuropathy. In 2002, he was appointed director of the NHGRI Intramural Research Program. In this leadership role, he established the Social and Behavioral Research Branch and the NIH Center for Research on Genomics and Global Health, and helped to launch innovative programs such as the Undiagnosed Diseases Program.
In 2009, NIH Director Francis Collins selected Dr. Green to be the NHGRI director. Shortly thereafter, he led the Institute to the completion of a strategic planning process that yielded an updated vision for genomics research, entitled Charting a course for genomic medicine from base pairs to bedside.
Beyond NHGRI-specific programs, Dr. Green has also played important leadership roles in the development of a number of high-profile efforts relevant to genomics, including the Smithsonian-NHGRI exhibition Genome: Unlocking Life's Code, the NIH Big Data to Knowledge (BD2K) program, the NIH Genomic Data Sharing Policy and the U.S. Precision Medicine Initiative.
In 2018, Dr. Green launched a new round of strategic planning for the Institute. The anticipated '2020 Vision for Genomics' aims to identify key areas of genomics that will expand the field into new frontiers and enable novel applications to human health and disease. The process will culminate in the publication of the new strategic plan in October 2020 to commemorate the 30th anniversary of the launch of the Human Genome Project.
The honorary Doctor of Science degree is the third award given to Dr. Green by Washington University. In 2005, he was given an Alumni Achievement Award from the university's School of Medicine, and in 2010, he was given a Distinguished Alumni Award.
Publicado por salud equitativa en 9:04