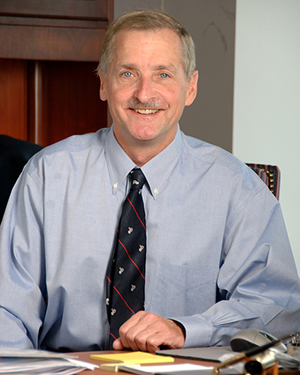 Dr. Jim Battey is retiring on June 1, 2018, after serving as a dedicated public servant for 35 years and NIDCD director for 20 years.

For more than two decades, James F. Battey Jr., M.D., Ph.D., has been a pillar of support and leadership for the National Institute on Deafness and Other Communication Disorders (NIDCD), expertly guiding research in hearing, balance, taste, smell, voice, speech, and language.
On June 1, Battey will retire as the director of the NIDCD. He has been a dedicated public servant for 35 years, joining the National Institutes of Health in 1983. He also served as a member of the U.S. Public Health Service Commissioned Corps for more than 21 years, until retiring as a rear admiral in 2008.
“Jim’s leadership has helped carry NIH through historic challenges and opportunities over the years,” said Francis S. Collins, M.D., Ph.D., director of the National Institutes of Health. Dr. Collins announced Battey’s retirement on May 10, 2018. Under Battey’s leadership, NIDCD-supported researchers developed the tools and programs necessary to implement universal newborn hearing screening. Battey fostered the partnership between NIH, the Health Resources and Services Administration, and the Centers for Disease Control and Prevention that established and maintains this program. Today, nearly all babies in the U.S. have their hearing tested shortly after birth. “Early hearing screenings allow parents to assess their options and decide on the best way to support their child’s developing communication skills,” said Battey.
Battey also fostered initiatives to improve the accessibility and affordability of hearing health care. Even though about 28.8 million U.S. adults could benefit from hearing aids, only 1 in 4 has ever tried one, with many citing cost as a deterring factor. The NIDCD’s research laid an evidence-based foundation for a new law passed in August 2017 that will make hearing health care more accessible and affordable for many Americans. The law requires the U.S. Food and Drug Administration to create a category of over-the-counter hearing aids for adults with perceived mild-to-moderate hearing loss.
Battey contributed significantly across NIH and the broader scientific community. “Jim’s leadership was crucial for launching NIH’s research initiatives using human embryonic stem cells,” Collins said. In 2002, Battey became the first chair of the NIH Stem Cell Task Force and testified in Congress on several occasions. Under his leadership, the task force brought together leaders in the field to identify barriers to stem cell research and to develop ideas to overcome those obstacles.
“Jim has been instrumental in some of the biggest advances in our field, including identifying dozens of genes and genetic mutations linked to hearing loss, language development, and stuttering,” said Judith Cooper, Ph.D., deputy director of the NIDCD. Cooper will serve as acting director of the NIDCD until a permanent director is named.
Battey is widely recognized for his own discoveries about G-protein-coupled receptors—particularly a subgroup of these receptors responsible for taste perception. During Battey’s tenure as director, the NIDCD supported a Nobel-Prize winning researcher credited with clarifying the molecular and cellular bases of our sense of smell. Discoveries in these areas have had a dramatic impact on the lives of the tens of millions of people with communication disorders and related conditions.
“I am proud to have served the NIDCD, an Institute that pushes the boundaries of knowledge to improve the lives of tens of millions of Americans with communication disorders,” reflected Battey. “I feel honored to have worked with so many dedicated and creative staff and researchers through the years. We could not have accomplished what we have so far without their contributions.”
Battey received a B.S. in physics from the California Institute of Technology in 1974, and an M.D. and Ph.D. in biophysics from Stanford University in 1980. He started his NIH career in 1983 at the National Cancer Institute (NCI), where he served as a senior staff fellow, then senior investigator. He later headed the molecular neuroscience section at the National Institute of Neurological Disorders and Stroke, and the molecular structure section when he returned to NCI in 1992. He joined the NIDCD in 1995, when he was appointed scientific director, and was named NIDCD director on February 10, 1998. Among his many honors, Battey was awarded the U.S. Public Health Service (PHS) Commendation Medal in 1990 and the PHS Outstanding Service Medal in 1994.
Battey will return to his home state of California to spend more time with his family and to volunteer as a tutor for public school science students.
About the National Institute on Deafness and Other Communication Disorders (NIDCD):The NIDCD supports and conducts research and research training on the normal and disordered processes of hearing, balance, taste, smell, voice, speech, and language and provides health information, based upon scientific discovery, to the public.
About the National Institutes of Health (NIH): NIH, the nation’s medical research agency, includes 27 Institutes and Centers and is a component of the U.S. Department of Health and Human Services. NIH is the primary federal agency conducting and supporting basic, clinical, and translational medical research, and is investigating the causes, treatments, and cures for both common and rare diseases.
Last Updated Date:
May 10, 2018