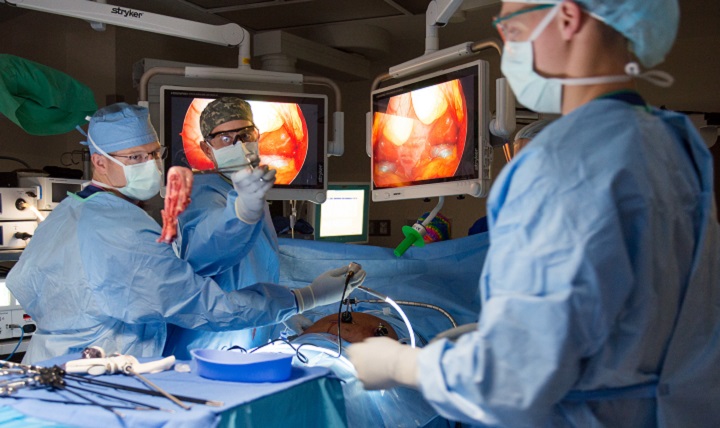 
WASHINGTON — The services’ surgeons general updated senators on Capitol Hill today on the needs and priorities of military health programs.
Army Lt. Gen. (Dr.) Nadja Y. West, Navy Vice Adm. (Dr.) C. Forrest Faison III and Air Force Lt. Gen. (Dr.) Mark A. Ediger testified on the posture of the services’ medical departments at a hearing of the Senate Appropriations Committee’s defense subcommittee on the president’s fiscal year 2019 funding request for the Defense Department’s health program.
Army medicine is focusing on readiness, modernization and its people to support the priorities of the service’s leaders, West said.
“Readiness permeates everything we do and has two essential components: an Army that is ready and a medical force within our Army that is ready,” she told the senators. “And readiness begins with a fit and healthy Army that serves as the foundation of a strong national defense.”
Army medicine has incorporated lessons learned from military operations in Afghanistan and Iraq to modify or create capabilities to better support warfighters’ needs, she said.
Such lessons, for example, led to the Army’s new expeditionary combat medic program and its expeditionary resuscitation surgery program, which is expected to decrease morbidity and mortality during high-intensity conflict, West said. “It will also increase our ability to provide prolonged battlefield care in the current and future environments we will be operating in,” she added.
Army medicine modernization efforts include partnering with academic institutions and industry to develop innovative solutions and counter measures to protect the force in any environment, she noted.
“The strength of our Army is our people,” West said. “The ability to recruit, develop, employ and retain our soldiers who are agile, adaptable, skilled medical professionals is vital for us to accomplish our mission.”

“Our greatest responsibility continues to be the readiness and support of a highly deployed Navy and Marine Corps team,” the Navy surgeon general said.
“Much of the success that we saw in saving lives on the battlefield during our most recent conflicts can be directly attributable to the heroic work of our first responders -- our corpsmen, medics and technicians,” Faison told the panel.
To address emerging challenges, the Navy surgeon general noted, Navy medicine has launched a comprehensive program targeted at preparing corpsmen to meet their lifesaving responsibilities and missions whether aboard a destroyer at sea or embedded with the Marine Corps in conflict.
Navy medicine continues to conduct worldwide research and development in support of its warfighters and their deployment readiness, he said. “These efforts range from trials of new malaria vaccine to assessing the threats of the newly discovered viruses in far-reaching corners of the world, he told the panel. “Our researchers are also directly engaged with the naval aviation community in conducting vital research aimed at understanding and mitigating physiologic episodes affecting air crew in tactical aircraft.”

Air Force medicine in 2017 revamped its surgical teams by changing their composition, training and equipment to increase independence and agility in coordination with the other services in the military health system, Ediger said.
“They are known as ground surgical teams consisting of only six airmen proven capable of trauma stabilization and damage control surgery in remote settings,” he explained. “We are building more ground surgical teams to increase our capacity to respond to the combatant commands.”
Critical care during medical air transportation has become transformational for medical support to combat operations, Ediger noted. “We are responding to a significant increase in operational requirements for critical care air medical transport teams by repurchasing end-strength into critical care skill sets.”
And to keep trauma and critical care teams ready, the Air Force implemented in 2017 standards for keeping deployable teams ready, specifying the annual frequency and mix of clinical procedures necessary to sustain readiness, he said.
Air Force medicine also increased its partnerships with premier institutions, which has resulted in highly effective readiness platforms for its trauma and critical care teams, the Air Force surgeon general said.
“We are working to implement a framework in close collaboration with the Army, Navy, Joint Staff and Defense Health Agency that will produce meaningful reform to health care delivery while implementing a new approach to sustaining a ready medical force,” Ediger said.
Disclaimer: Re-published content may have been edited for length and clarity. Read original post.

Occupational therapists showcase their grasp for your grip

Occupational therapists use a holistic approach to rehabilitate and treat physical, psychological and even emotional injuries
Recommended Content:
Military Hospitals and Clinics

Ready, set, focus: Finding calm in a storm through the power of breathing

At the time of entry into military service, many members of the U.S. Armed Forces are young, physically active, and in good physical health. However, following entry, many service members develop or are discovered to have risk factors for cardiovascular disease (CVD). This report documents the incidence and prevalence of select risk factors for CVD ...
Recommended Content:
Health Readiness | Armed Forces Health Surveillance Branch | Epidemiology and Analysis | Medical Surveillance Monthly Report

Eat an apple a day, but don't keep the dentist away