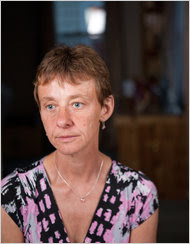 Prone to Error: Earliest Steps to Find Cancer
By STEPHANIE SAUL
Published: July 19, 2010
Monica Long had expected a routine appointment. But here she was sitting in her new oncologist’s office, and he was delivering deeply disturbing news.

Nearly a year earlier, in 2007, a pathologist at a small hospital in Cheboygan, Mich., had found the earliest stage of breast cancer from a biopsy. Extensive surgery followed, leaving Ms. Long’s right breast missing a golf-ball-size chunk.

Now she was being told the pathologist had made a mistake. Her new doctor was certain she never had the disease, called ductal carcinoma in situ, or D.C.I.S. It had all been unnecessary — the surgery, the radiation, the drugs and, worst of all, the fear.

“Psychologically, it’s horrible,” Ms. Long said. “I never should have had to go through what I did.”

Like most women, Ms. Long had regarded the breast biopsy as the gold standard, an infallible way to identify cancer. “I thought it was pretty cut and dried,” said Ms. Long, who is a registered nurse.

As it turns out, diagnosing the earliest stage of breast cancer can be surprisingly difficult, prone to both outright error and case-by-case disagreement over whether a cluster of cells is benign or malignant, according to an examination of breast cancer cases by The New York Times.

Advances in mammography and other imaging technology over the past 30 years have meant that pathologists must render opinions on ever smaller breast lesions, some the size of a few grains of salt. Discerning the difference between some benign lesions and early stage breast cancer is a particularly challenging area of pathology, according to medical records and interviews with doctors and patients.

Diagnosing D.C.I.S. “is a 30-year history of confusion, differences of opinion and under- and overtreatment,” said Dr. Shahla Masood, the head of pathology at the University of Florida College of Medicine in Jacksonville. “There are studies that show that diagnosing these borderline breast lesions occasionally comes down to the flip of a coin.”

There is an increasing recognition of the problems, and the federal government is now financing a nationwide study of variations in breast pathology, based on concerns that 17 percent of D.C.I.S. cases identified by a commonly used needle biopsy may be misdiagnosed. Despite this, there are no mandated diagnostic standards or requirements that pathologists performing the work have any specialized expertise, meaning that the chances of getting an accurate diagnosis vary from hospital to hospital.

Dr. Linh Vi, the pathologist at Cheboygan Memorial Hospital who diagnosed D.C.I.S. in Ms. Long, was not board certified and has said he reads about 50 breast biopsies a year, far short of the experience that leading pathologists say is needed in dealing with the nuances of difficult breast cancer cases. In responding to a lawsuit brought by Ms. Long, Dr. Vi maintains that she had cancer and that two board-certified pathologists at a neighboring hospital concurred with his diagnosis.

Yet several leading experts who reviewed Ms. Long’s case disagreed, with one saying flatly that her local pathologists “blew the diagnosis.”

The questions that often surround D.C.I.S. diagnoses take on added significance when combined with criticism that it is both overdiagnosed and overtreated in the United States — concerns that helped fuel the recent controversy over the routine use of mammograms for women in their 40s.

The United States Preventive Services Task Force, an independent panel that issues guidelines on cancer screening, found last November that the downside of routine annual mammograms for younger women might offset the benefits of early detection. The panel specifically referred to overdiagnosis of D.C.I.S., as well as benign but atypical breast lesions that left undetected would never cause problems.

D.C.I.S., which is also called Stage 0 or noninvasive cancer, was a rare diagnosis before mammograms began to be widely used in the 1980s. Until then, breast pathology typically involved reading tissue from palpable lumps. The diagnoses — usually invasive cancer, a benign fibroid tumor or a cyst — were often obvious.

Today, D.C.I.S. is diagnosed in more than 50,000 women a year in this country alone. The abnormal cells, which are encased in breast ducts, are removed before they develop into invasive cancer. There are estimates that if left untreated, it will turn into invasive cancer 30 percent of the time, though it could take decades in some cases.

Concerned about the accuracy of breast pathology, the College of American Pathologists said it would start a voluntary certification program for pathologists who read breast tissue. Among its requirements is that the pathologists must read 250 breast cases a year.

While the program has not started yet, it is still controversial.