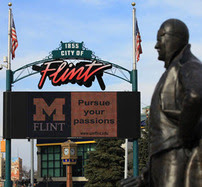 City’s Current Water, Sourced from Lake Huron, Doesn’t Contain Metals and Minerals at Levels Associated with These Conditions.
The federal government and the State of Michigan today released the results of a months-long investigation launched to better understand the rashes and hair loss experienced by Flint residents.An analysis of water quality data from April 2014 to October 2015, when the city’s water supply was sourced from the Flint River, found that the pH, chlorine and water hardness levels fluctuated and were, at times, higher during that period and might have led to rashes. Rashes that developed then might have been made worse by mental and physical stress and changes in personal care routines (showering, bathing, use of harsh soaps, and topical treatments) in response to concerns about the water, as well as cold/dry winter weather, lack of treatment, and other factors. However, while some residents developed rashes after October 2015 and are still experiencing these conditions, the city’s current water supply, sourced from Lake Huron, does not contain metals and minerals at levels known to be associated with skin problems. In addition, nothing has been identified in the current water supply that could cause hair loss.“The rashes Flint residents have reported are of great concern to the community and to all of us who are working to improve health in the city,” said Dr. Nicole Lurie, the U.S. Department of Health and Human Services’ (HHS) assistant secretary for preparedness and response who is leading the Obama Administration’s response efforts in Flint. “The team of chemical exposure experts and local dermatologists looked for any and every possible cause of these rashes and found evidence supporting Flint residents’ concern that water from the Flint River might have led to skin problems. Fortunately, water samples from the city’s current water did not show metals and minerals at levels that would cause or make rashes worse. Residents who are still suffering from rashes or hair loss or have other health concerns should visit a doctor or a community health center for care and possible referral to a dermatologist.”"I appreciate the many resources federal and state agencies dedicated to investigating the cause of the rashes experienced by so many Flint residents,” said Mayor Karen Weaver. “The findings of the investigation validate many of the concerns expressed. Now, residents have access to the care they need to ensure any new or unresolved rashes are treated."In February 2016, in response to reports from Flint residents of rashes and hair loss, the Michigan Department of Health and Human Services (MDHHS) with the help of federal agencies launched a multi-part investigation to better understand these conditions that included a telephone survey/questionnaire, a dermatologic evaluation by one of four Flint-area dermatologists, water quality sampling, and analysis of historic water quality data from the Flint water treatment plant.  The federal agencies that helped with the investigation were the U.S. Department of Health and Human Services, including the Centers for Disease Control and Prevention (CDC), Agency for Toxic Substances and Disease Registry, and the U.S. Environmental Protection Agency.“Thanks to the feedback from the community, we now have a stronger understanding of the rashes Flint residents are experiencing,” said Dr. Eden Wells, chief medical executive with MDHHS. “The choice to use the municipal water supply to shower or bathe is an individual one. We recommend that residents with concerns discuss their symptoms with a doctor to help them make decisions about their use of the water.”A total of 429 residents were identified to participate in the investigation by self-nomination, physician referral and other methods. Findings are summarized here:
Interviews, Water Sampling, Dermatologic Visits
Symptom Onset
Of the 390 residents who were interviewed for the investigation in-person or by phone:
Changes in Water
Changes in Bathing Habits
“After interviewing and examining 122 participants, the dermatologists were most struck by Flint residents’ very heightened level of concern about current water quality,” said Dr. Walter Barkey, one of the four Flint-area dermatologists who volunteered to help with the investigation. “We concur that the water quality testing performed on current water was quite comprehensive and did not find any abnormality that could cause or worsen rashes or hair loss.   We also concur that the marked fluctuations in pH, hardness, and chlorine while the Flint River was the water source could really explain the most common type of rash found in the study which was eczema.”“The results of this investigation combined with our other efforts in Flint underscore how critical clean water is. All Americans deserve access to clean water and rightfully expect that due care is taken when it comes to water for consumption and bathing,” said Patrick Breysse, Ph.D., director of CDC’s National Center for Environmental Health and the Agency for Toxic Substances and Disease Registry.The federal government and State of Michigan will continue to monitor Flint residents’ reports of rashes and hair loss. As part of this monitoring, experts from CDC will be on the ground in Flint starting this week to talk with community members and public health officials about the results of the investigation and what residents should do if they continue to experience these conditions.Residents who are still experiencing rashes, hair loss, and other skin problems should contact their doctor or a community health center for follow-up services, which may include referral to a dermatologist. Residents who would like help accessing health, nutrition, education, and water support services that are available to Flint residents, should call 211 or visit http://flintcares.com/.  For more information about the investigation and federal response efforts in Flint, visithttp://PHE.gov/Flint.
Publicado por salud equitativa en 4:11