Teachers, parents, and researchers have long recognized that unruly students in classrooms can impact the quality of education for other pupils, but it has been difficult to estimate their impact.
In The Long-Run Effects of Disruptive Peers(National Bureau of Economic Research Working Paper No. 22042), Scott E. Carrell, Mark Hoekstra, and Elira Kukareport that classroom disruptions lead to more than just short-term lower grades and test scores. They also harm the long-term college, career, and income prospects of other pupils.
Over the years, a growing body of research has established that classroom environments, including peer influences, can positively or negatively alter the course and quality of teaching and learning in schools. In a previous study, Carrell and Hoekstra showed how elementary school children from families linked to domestic violence disrupted behavior and learning in the classroom. Their analysis focused on short-term consequences of disruptive peer behavior, such as the effect on test scores.
This new study explores impacts stretching years into the future.
The researchers combine data on disruptive peers in elementary schools in Alachua County, Florida, including information about test scores of children from families with histories of domestic violence, with data on high-school test scores, college enrollments, and early-adult earnings of thousands of students who years earlier had disruptive peers in their elementary school classes. 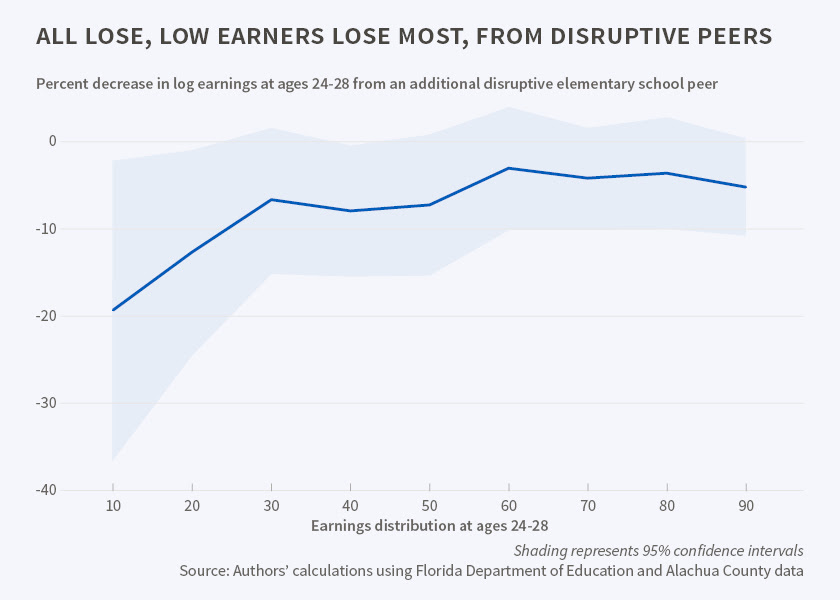 They find that exposure to disruptive peers in childhood has significant long-run consequences for both educational achievement and earnings in early adulthood. They estimate that exposure to one additional disruptive student in a class of 25 throughout elementary school reduces math and reading test scores in grades 9 and 10 by 0.02 standard deviations and that, in the case of particularly disruptive elementary school students, such as young males exposed to domestic violence, there are larger effects on high school test scores and on college degree attainment.
Specifically, exposure to a disruptive boy throughout elementary school reduces college degree attainment by two percentage points, or seven percent.
Exposure to an additional disruptive peer throughout elementary school leads to a three to four percent reduction in earnings at ages 24 to 28. One year of exposure to a disruptive peer in childhood decreases the present discounted value of classmates' future earnings by around $100,000.
The researchers note that students from lower-income families are more likely to be exposed to disruptive peers in school, and that this may account for five to six percent of the "rich-poor earnings gap" in their early-adult years. They conclude that these "findings illustrate the importance of peer composition in determining long-run educational attainment and labor market outcomes."
Reproduced from The Digest, National Bureau of Economic Research, under a Creative Commons licence.

Today's lead story by Karl D. Stephan on the security of online electronic voting machines is more relevant than ever after the debacle of Australia's census night yesterday.
Every five years government statisticians run a census. This year, they estimated that 65 percent of the country would submit the information online. However, the census servers crashed, creating a gigantic muddle. The government claims that the problem was caused by a denial-of-service attack by hackers from the United States; critics say that the system was not powerful enough to cope with millions of people online at the same time.
Whatever the reason, the chaos suggests that the alarmists were right: personal data could be at risk. The government says that names and personal data have probably not been stolen. However, hacker victims normally only find out long afterwards when their data is dumped on the internet. Would you still feel safe casting your vote on a machine?