Gaining Clinician Support for Health IT to Improve Patient Safety 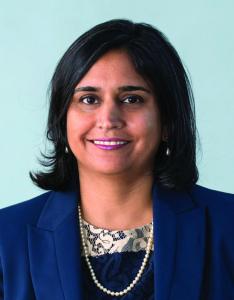 “AHRQ funding helped us understand not only how health IT could reduce medication errors, but also the steps we needed to take to get clinicians’ support.”

Use of health information technology (IT) in hospitals was initially a tough sell.  But Tejal Gandhi, M.D., M.P.H., was ahead of the curve in the early days because of her understanding of how health IT can improve patient safety and how best to gain clinician support for its adoption.
As a clinician and health services researcher, Dr. Gandhi’s AHRQ-funded work since the early 2000s has produced valuable insights about health IT’s role in reducing medication errors in inpatient and outpatient settings, as well as the prevalence of cognitive and systems factors in errors.  Today, she continues her patient safety work in an advocacy role, serving as the Chief Clinical and Safety Officer of the Institute for Healthcare Improvement

(IHI) in Boston. The IHI merged with the National Patient Safety Foundation (NPSF) in May 2017; Dr. Gandhi served as NPSF’s president from 2013 until the merger with IHI.  She continues to serve as an Associate Professor of Medicine at Harvard Medical School.
An early funder of health IT research, AHRQ supported Dr. Gandhi’s work at Brigham and Women’s Hospital in Boston beginning more than a decade ago. Her findings have helped produce a keener understanding of how health IT can improve patient safety in complex clinical settings, while acknowledging the unique human factors that come into play when clinicians learn and adopt new skills.
For example, her study, published in the May 6, 2010 issue of the New England Journal of Medicine, showed major improvements in medication safety when hospitals used barcode technology with electronic medication administration (eMAR) systems. Errors in medication administration dropped by 41 percent, and potential adverse drug events fell by half.  While the patient safety results were encouraging, Dr. Gandhi and her team also confirmed the need to provide training and monitoring to physicians, pharmacy directors, and nursing staff so that they could adopt the barcode-enhanced eMAR system without creating major interruptions in their workflow.
To this end, the hospital installed user-friendly screens, made devices available for physician use only, and modified hardware for different clinical areas.  Clinicians teaching other clinicians how to use new technologies also proved to be the most effective form of training.  These takeaways, which have since become standard features of how clinicians learn how to adopt new health IT systems, were important insights in gaining early acceptance.
AHRQ also funded Dr. Gandhi to apply lessons from this study to the ambulatory setting, where medication errors are more difficult to identify and monitor than in hospitals.
To assess how patient safety could be improved, she examined the benefits of linking ambulatory computerized physician order entry (CPOE) and clinical decision support (CDS) systems. When this study began in 2004, the patient safety benefits of inpatient CPOE were becoming well-known, but the benefits in the ambulatory setting were less certain. In testing the benefits of integrating CPOE and CDS in the ambulatory setting, Dr. Gandhi found that physicians were able to get prompts at various times about the desired course of action and to take an action with minimal effort.
Dr. Gandhi’s research has also led to a greater understanding of the factors that contributed to errors in four major categories of clinical care: obstetrics, surgery, diagnosis, and medication administration.  She served as a co-investigator in a study funded by AHRQ and an insurance company owned by Harvard Medical Institutions, which analyzed medical malpractice claims from physicians and hospitals to quantify the role of cognitive and systems-related factors in the occurrence of errors.  The Malpractice Insurers’ Medical Error Surveillance and Prevention Study, or MIMESPS, found that approximately nine out of 10 errors involved a cognitive error, and more than three-fourths were due to the combination of cognitive and system-related factors. Findings from MIMESPS, which ran from 2001 through 2005, helped to identify key areas where errors were most likely to occur and link them to interventions most likely to prevent them.
More recently, Dr. Gandhi has advocated for adoption of standards that would put health IT’s safety-enhancing benefits and other innovations in hospitals nationwide.  By working toward national safety goals, metrics, and adoption of interventions, hospitals and physicians could share the benefits of patient safety improvements more broadly.
Dr. Gandhi has received numerous awards, including the 2009 John M. Eisenberg Patient Safety and Quality Award, for her contributions to understanding the epidemiology and possible prevention strategies for medical errors in the outpatient setting.
Principal Investigator: Tejal Gandhi, M.D., M.P.H, Chief Clinical and Safety Officer, Institute for Healthcare Improvement, Associate Professor of Medicine, Harvard Medical School
Institution: Institute for Healthcare Improvement
Grantee Since: 2003
Type of Grant:  Research Project Award
Return to AHRQ Grantee Profiles
Page last reviewed December 2017
Page originally created December 2017
Internet Citation: Gaining Clinician Support for Health IT to Improve Patient Safety. Content last reviewed December 2017. Agency for Healthcare Research and Quality, Rockville, MD. http://www.ahrq.gov/funding/grantee-profiles/grtprofile-gandhi.html
Publicado por salud equitativa en 10:29