Summary:
In 1984, Alexa Canady became the first African-American woman certified by the American Board of Neurological Surgery.

As a writer within HHS, it is my job to interview and profile amazing people doing great work to improve the health and well-being of all Americans. In honor of Black History Month, I was excited to find that my latest subject was also a familiar face: Alexa Canady, a college friend and college-newspaper colleague of mine. As she later told me, when we re-connected, it never occurred to her that she would be making history.
After our undergrad days (many days ago), Alexa became the first African-American woman neurosurgeon in the United States. When I asked her how it felt being a part of African-American history, she said, “I just wanted to do what I wanted to do. I had no idea that I would be making history.”
Alexa did eventually realize “there weren’t that many women neurosurgeons in front of me.”
But, she said, “For me it didn’t mean as much at the time as it did for other people, for young girls. Even if they’re not going to be surgeons, or even be in medicine, they can see there’s a world open to them.”
“It was also important that white male residents now wanted to enter my world,” she said. “I didn’t realize the significance at the time, that it was important to other people to see that.” 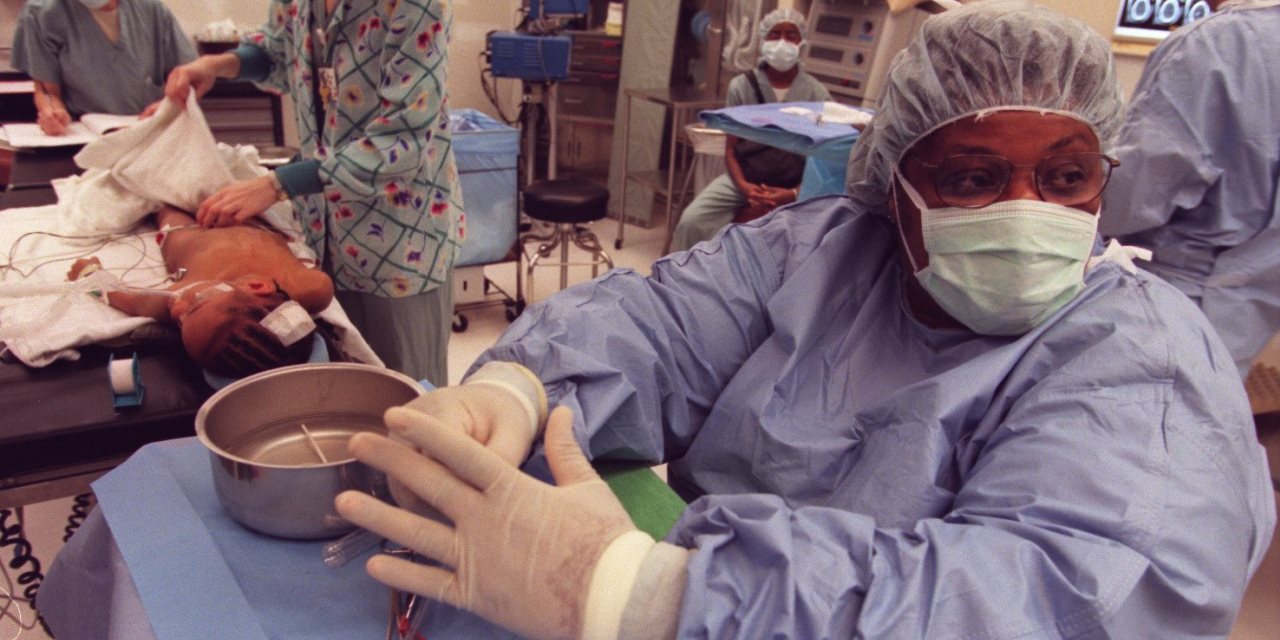 Alexa Canady, M.D. during surgery © Hugh Grannum/Detroit Free Press/ZUMA
Alexa grew up in an upper middle class Michigan family. Her father was a dentist. She went to the University of Michigan (where we worked together on the campus newspaper, the Michigan Daily), and became interested in the medical field during a summer program for minority students.
Alexa later decided she had a good fit with pediatric neurosurgery. “I liked the honesty of it. I liked fixing things,” she said. She also liked watching her patients and their families grow over the years. Alexa told the National Women’s Law Center: “The children taught me so much — about living in the moment with tremendous courage and grace despite serious and often terminal illnesses. I took care of some children for 15 to 20 years. I watched them grow up. I got up in the middle of the night to care for them. I cared for every single one of them as if they were my own.”
Her choice of neurosurgery drew only a tepid response from her parents, which surprised her because they had always been strongly supportive of her decisions. She thinks they worried about her getting hurt by people who didn’t have faith in a black woman making it in such a demanding field.
And there were obstacles. When she was attending to patients at the University of Minnesota, one of the senior administrators said, “Oh, you must be our new equal-opportunity package.”
She also had to work hard to convince her neurosurgery department chairman that she was not a risk to drop out or be fired. That would have been “a disaster in a program where there are only one or two residents per year. I was the first African-American woman” in the department, she told NIH’s National Library of Medicine in its "Changing the Face of Medicine" report.
But such obstacles didn’t stop her.
Alexa got her medical degree, cum laude, from the University of Michigan in 1975. After graduating from medical school, she became a surgical intern at Yale-New Haven and then trained at the University of Minnesota, where she was the first African-American woman neurosurgery resident in the U.S. She became a pediatric neurosurgery fellow at the Children’s Hospital of Philadelphia and, in 1984, became the first African-American woman certified by the American Board of Neurological Surgery. At the age of 36, she became chief of neurosurgery at Children’s Hospital of Michigan, where she specialized in congenital spinal abnormalities, hydrocephalus, trauma and brain tumors.
Alexa retired in 2001—sort of. When she moved to Florida, she was persuaded to practice part-time at Pensacola’s Sacred Heart Hospital because there was no pediatric neurosurgeon locally. She’s fully retired now.
Making her way in medicine wasn’t always easy. Despite the outward self confidence that others saw in her, Alexa said she feared that as a black woman, her opportunities to practice would be limited. But she found that by focusing on her patients and their families, “the practice growth was exponential.”
And though it didn’t occur to her at the time, or perhaps simply did not seem very important to her then, Alexa secured her place in black history.
Posted In:
Holidays and Observances
Tagged:
medicine | Black History Month
Publicado por salud equitativa en 5:23