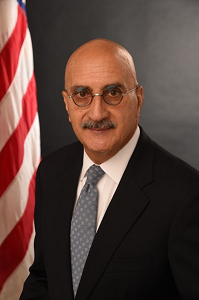 I’m pleased that a number of AHRQ employees received awards this week that capture the essence of what the Agency does to improve safety, generate data and insights, and develop evidence on what works and doesn’t work in health care.
This week is Public Service Recognition Week

, and I offer high praise to all of the nearly 300 AHRQ staff members who diligently serve the American people in our endeavor to make health care safer, higher quality, and more affordable and accessible.
Several of our colleagues went above and beyond the call of duty and were recognized by HHS Secretary Alex Azar Wednesday as part of the 2016-2017 HHS Departmental Awards Ceremony in Washington, DC.
The HHS Departmental Awards are the highest honor bestowed to individuals and groups. I’d like to take a few moments to shine a light on the AHRQ employees who earned recognition from the Secretary.
James Cleeman, M.D., AHRQ’s Director of the Division of Healthcare-Associated Infections (HAIs) in the Center for Quality improvement and Patient Safety, received the Secretary’s Award for Distinguished Service. Dr. Cleeman was presented with the Department’s highest honor in recognition of his achievements in improving the health of Americans over the course of his more than 40-year career in HHS.
At AHRQ, Dr. Cleeman has led the Agency’s efforts to prevent and reduce HAIs and combat antibiotic resistance. Under his leadership, AHRQ has promoted the implementation of the Comprehensive Unit-based Safety Program, a proven method of preventing HAIs, in a series of nationwide projects that have significantly reduced these infections
Before joining AHRQ, for 25 years, Dr. Cleeman directed the National Cholesterol Education Program at National Institutes of Health’s National Heart, Lung, and Blood Institute and spearheaded the successful national effort that reduced population cholesterol levels, improved the clinical treatment of high blood cholesterol, and reduced the risk for cardiovascular disease.
In his first HHS role, Dr. Cleeman was instrumental in developing a national policy on blood collection and distribution that eliminated paid commercial blood from the system and improved the safety of blood transfusion. For more than four decades, Dr. Cleeman’s achievements across Government have exemplified his sustained excellence and outstanding contributions throughout his distinguished career in HHS.
Dr. Cleeman was also recognized, along with his HAI prevention colleagues Dale Burwen, M.D., Margaret Ciffolilli, Kali Crosby, M.S.N., Darryl Gray, M.D., and Melissa Miller, M.D., with the Secretary’s Award for Distinguished Service for the HHS Task Force on Combating Antibiotic-Resistant Bacteria. The Task Force has made significant progress in countering the threat of antibiotic resistance, in accord with the National Action Plan for Combating Antibiotic-Resistant Bacteria (CARB). The AHRQ members of the Task Force have made notable contributions in research and implementation by addressing all three domains of CARB: promoting antibiotic stewardship, preventing transmission of antibiotic-resistant bacteria, and preventing HAIs. 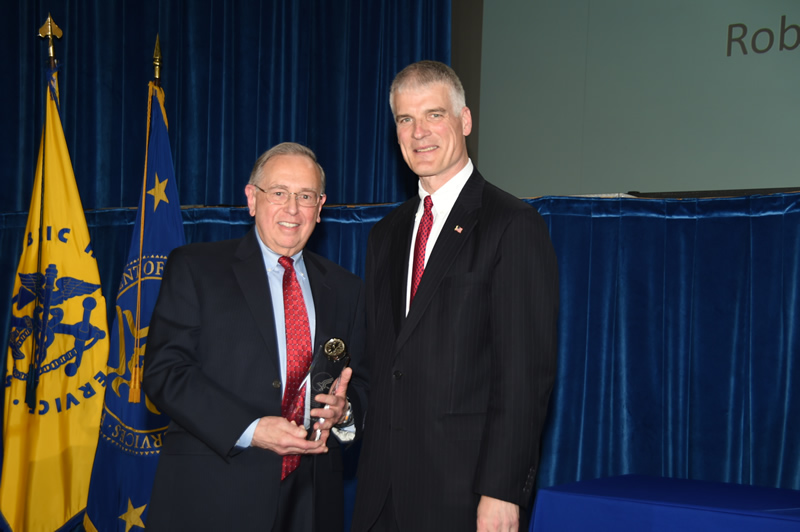 HHS Chief of Staff Peter Urbanowicz recognizes James Cleeman, M.D., AHRQ’s Director of the Division of Healthcare-Associated Infections in the Center for Quality Improvement and Patient Safety, with the HHS Secretary’s Award for Distinguished Service during the 2016-2017 Departmental Awards Ceremony in Washington, DC. Dr. Cleeman received the award in recognition of his achievements in improving the health of Americans over the course of his more than 40-year career in HHS.
Additionally, other staff members from various offices and centers within the Agency received the Secretary’s Award for Distinguished Service for their contributions to the Office of the Secretary’s Patient-Centered Outcomes Research Trust Fund Portfolio Team. The cross-Departmental working group comprised of several HHS operating divisions collaborated on developing new strategies and tools to improve the research infrastructure through investments from the Trust Fund. AHRQ colleagues who have been integral members of the team and have served in leadership roles for several years now include David Meyers, M.D., Christine Dymek, Ph.D., Kevin Heslin, Ph.D., and Elise Berliner, Ph.D.
As the Secretary mentioned during the awards ceremony, HHS employees embody four admirable traits: integrity, teamwork, courage and discipline. At AHRQ, I see these traits on display every day.
I am so proud to be working with each of my colleagues, so I ask that you please join me in recognizing these dedicated Federal employees whose passion for public service exemplifies AHRQ’s commitment to improving the health of the American people. Thank you!
Gopal Khanna is the Director of AHRQ.
Get more AHRQ news, sign up for AHRQ news via email, and follow AHRQ on Twitter, LinkedIn