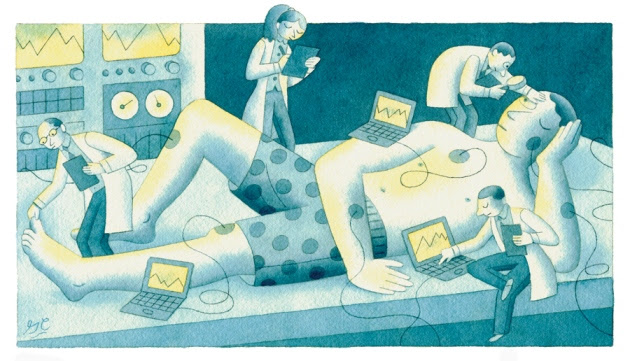 Illustration by Greg Clarke
Every day, millions of people are taking medications that will not help them. The top ten highest-grossing drugs in the United States help between 1 in 25 and 1 in 4 of the people who take them (see 'Imprecision medicine'). For some drugs, such as statins — routinely used to lower cholesterol — as few as 1 in 50 may benefit1. There are even drugs that are harmful to certain ethnic groups because of the bias towards white Western participants in classical clinical trials2.
Recognition that physicians need to take individual variability into account is driving huge interest in 'precision' medicine. In January, US President Barack Obama announced a US$215-million national Precision Medicine Initiative. This includes, among other things, the establishment of a national database of the genetic and other data of one million people in the United States.

More related stories
Classical clinical trials harvest a handful of measurements from thousands of people. Precision medicine requires different ways of testing interventions. Researchers need to probe the myriad factors — genetic and environmental, among others — that shape a person's response to a particular treatment.
Studies that focus on a single person — known as N-of-1 trials — will be a crucial part of the mix. Physicians have long done these in an ad hoc way. For instance, a doctor may prescribe one drug for hypertension and monitor its effect on a person's blood pressure before trying a different one. But few clinicians or researchers have formalized this approach into well-designed trials — usually just a handful of measurements are taken, and only during treatment.
Publicado por salud equitativa en 6:48