The main reason to examine both changes in prices and affordability is that the magnitude of the changes in prices and affordability is most likely to affect behavior over time. Accordingly, we measured trends by using the average annual percentage change, which was estimated by using the constant growth regression technique (33). To consider changes in prices over time, nominal prices were converted to real prices to take into account inflation (in constant 2010 prices). We used the relative-income price method to measure the affordability of sugar-sweetened beverages. This method was developed to measure trends in affordability of cigarettes (29). The method uses a broad measure of income (per capita gross domestic product [GDP]), which is appropriate for research on LMICs because it is a comprehensive measure of economic activity, for example, by including crucial components of the economy such as the value of public goods and services as well as transfer payments. Although not perfect (for example, in some HICs, some evidence suggests that wages and/or household incomes are not keeping up with overall growth for some discrete groups [34,35]), this method also permits the calculation of affordability for the largest group of countries and the longest possible annual time series. Narrower measures of income, such as wages, are not as widely and frequently available as GDP and thus would limit the number of countries, particularly the number of LMICs, and the length and frequency of the time series (30). Narrow measures of income may be preferable for individual country studies or for groups of countries where such data are readily available.
The relative-income price for cigarettes measures the percentage of per capita GDP needed to purchase 100 packs of cigarettes per year. We adapted this measure to estimate the percentage of per capita GDP to purchase 100 L of sugar-sweetened beverages. A higher relative-income price means that sugar-sweetened beverages are less affordable than in a country or time period with a lower relative-income price, and an increase in relative-income price means that sugar-sweetened beverages have become less affordable. The relative-income price is a relative concept and has no absolute meaning; that is, a sugar-sweetened beverage cannot be affordable or unaffordable, but rather can be more or less affordable than in another country or time period.
We used Coca-Cola as a proxy for all sugar-sweetened beverages because it is the most globally recognizable sugar-sweetened beverage brand and largely homogeneous. The greater availability of data for this product also permits us to include many more countries and a longer time series. Coca-Cola is the largest carbonated soft drink brand in the world, comprising 25.8% of the global market in 2014, more than double its closest competitor. Including Coca-Cola derivatives (eg, Diet Coke), the brand accounts for 32.8% of the global market for carbonated soft drinks (36). Furthermore, some research suggests that despite complexity in pricing among sugar-sweetened beverage firms, prices for like-products commonly converge (37).
Price data were drawn from the Economist Intelligence Unit’s World Cost of Living Survey (38). This survey annually collects prices on many consumer goods. Sugar-sweetened beverages are represented by the price of 1 L of Coca-Cola in 2 retail environments (a supermarket and a mid-priced store). By convention, we used the lowest price of the two (in some countries and/or years only one environment is surveyed) (29,30). The survey collects prices by city. In many countries only a single city is surveyed, and we used data for that city. However, in some countries, multiples cities are surveyed, and we used the average price. When cities were added at a later stage or during inconsistent time periods, by convention, we did not include the additional cities (29,30).
Income data were collected from the International Monetary Fund’s World Economic Outlook Database (39) in the local currency to calculate the relative-income price. During periods of hyperinflation, US dollar values were used instead. Real prices for those countries were estimated in US dollars as well. Countries were categorized as either an HIC or an LMIC according to the World Bank’s most recent classification. The sample consisted of 82 countries: 42 LMICs and 40 HICs.
The analysis was conducted in 3 parts. We first considered the differences among countries in 2016 for prices in US dollars and the relative-income price. Second, we considered the trends in real prices and the relative-income price from 1990 through 2016. Third, because changes in affordability can be driven by declines in prices or increases in incomes or a combination of the two, it is useful to decompose the change in affordability into the changes in prices and incomes. To illustrate this, we subtracted the average annual percentage change of price from the average annual percentage change of relative-income price, thereby estimating the average annual percentage change of income and then stacking the price and income components. Because an increase in price increases the relative-income price but an increase in income decreases the relative-income price, we inverted the income series so that the stacked components combined to measure the change in affordability. We then ordered the series by the change in affordability.
Top

The mean (standard deviation) price of 1 L of Coca-Cola in 2016 was $0.73 ($0.26) among all countries surveyed ( Table 1); the price varied considerably around the world, ranging from $0.38 per liter in Ukraine to $2.74 per liter in Papua New Guinea (Figure 1). Both the lowest and highest prices were in LMICs. The mean and median prices for sugar-sweetened beverages were higher in HICs than in LMICs, although the differences were not large (Table 1). We found substantial variation in both the LMIC and HIC groups, although the within-group variation was similar. 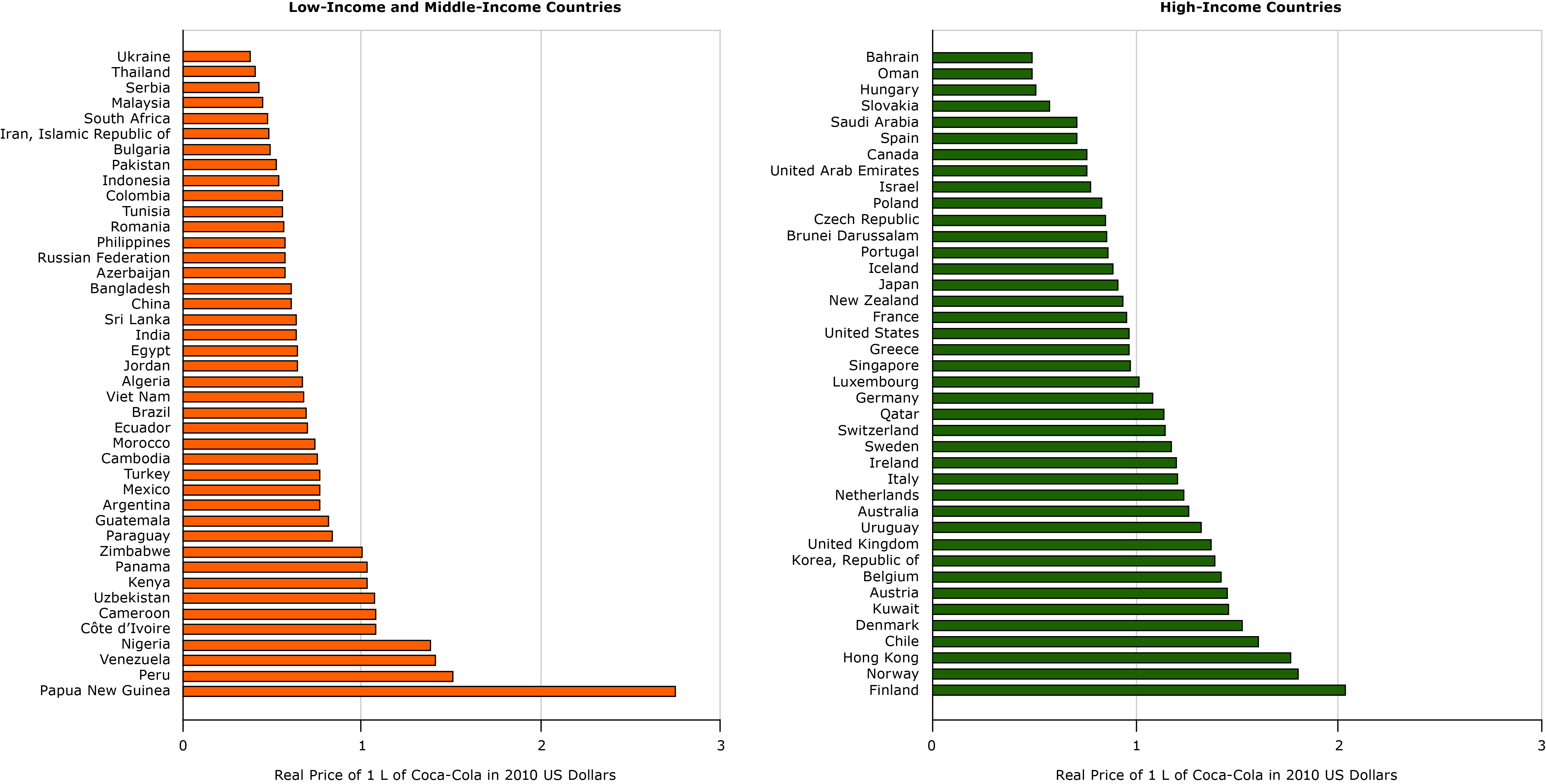 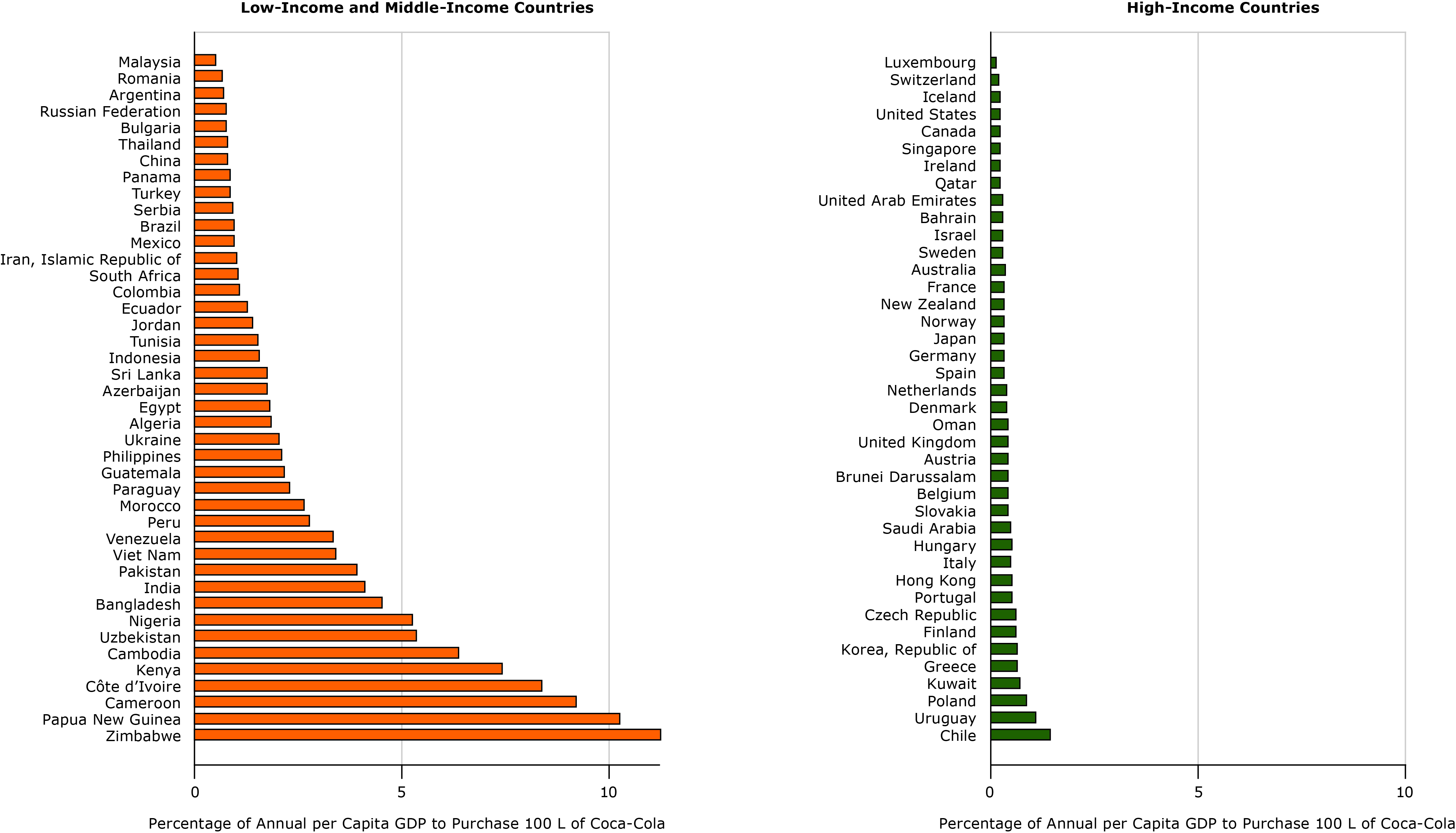 Figure 2. Relative-income price of 100 L of Coca-Cola in 40 high-income and 42 low-income and middle-income countries, 2016. Units are percentage of annual per capita gross domestic product (GDP) to purchase 100 L of Coca-Cola. [A text version of this figure is also available.]

Changes in prices and affordability between 1990 and 2016 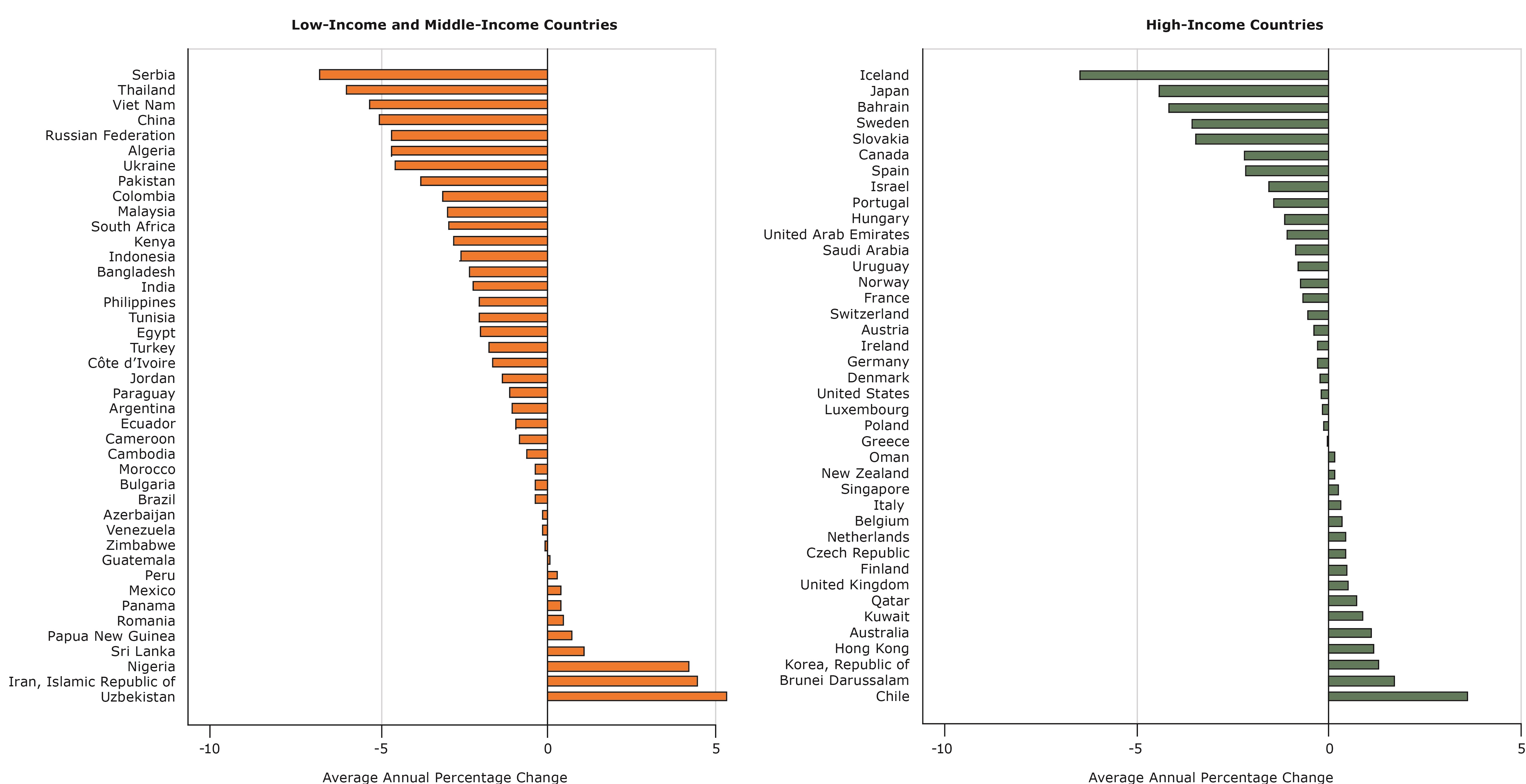 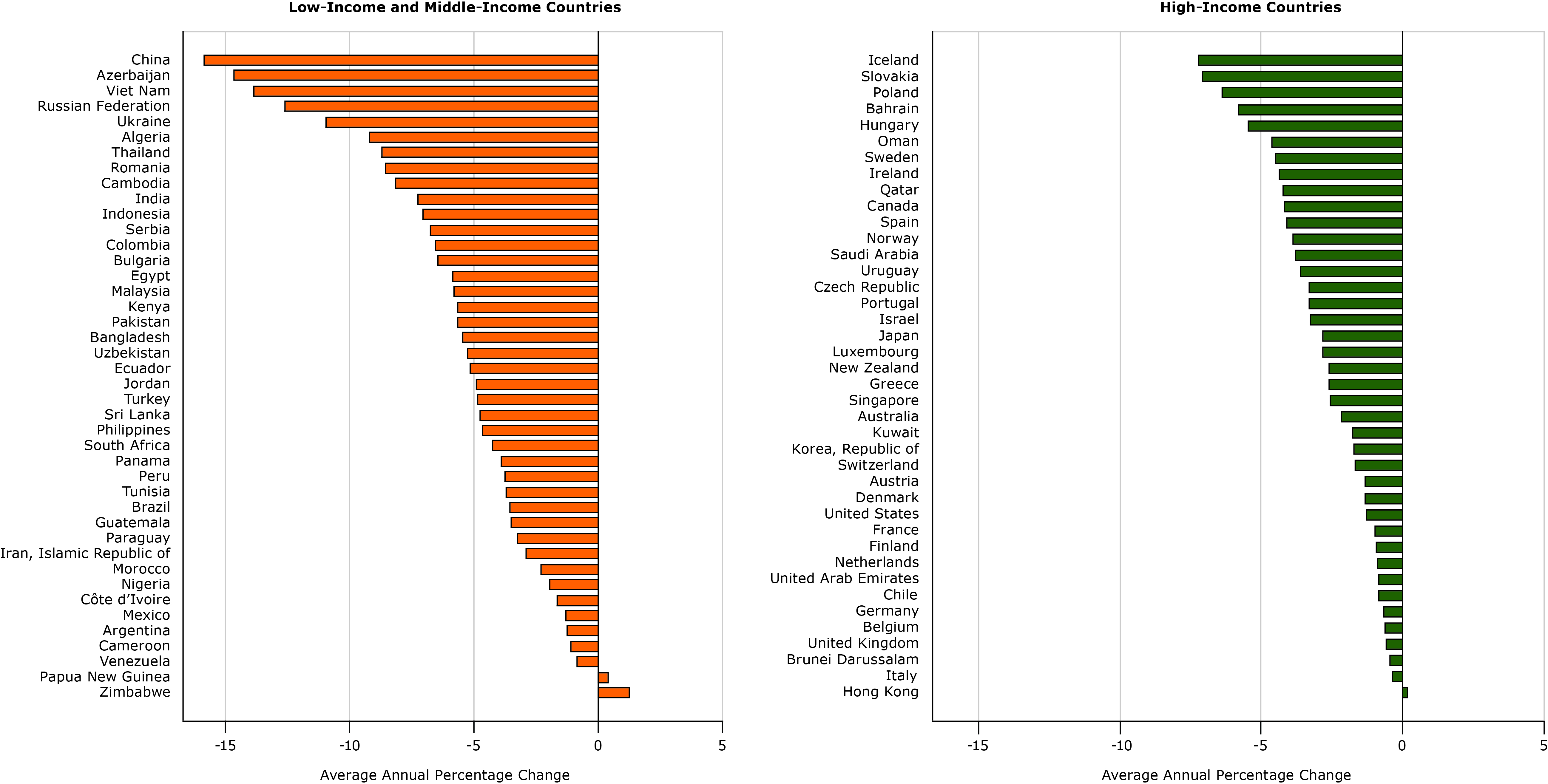 Figure 4. Average annual percentage change in relative-income price of sugar-sweetened beverages in 40 high-income and 42 low-income and middle-income countries from 1990 to 2016. [A text version of this figure is also available.]
The country with the largest annual average increase in affordability (or negative average annual percentage change of relative-income price) between 1990 and 2016 was China (Figure 5), where prices declined and incomes increased (income was inverted so it appears negative, but is in fact positive to the same magnitude). Conversely, prices increased on average annually in the Islamic Republic of Iran (hence a positive value in the figure) and so did income (again plotted as a negative value with respect to affordability), but because the increase in income was greater than the increase in price, affordability increased and relative-income price declined. 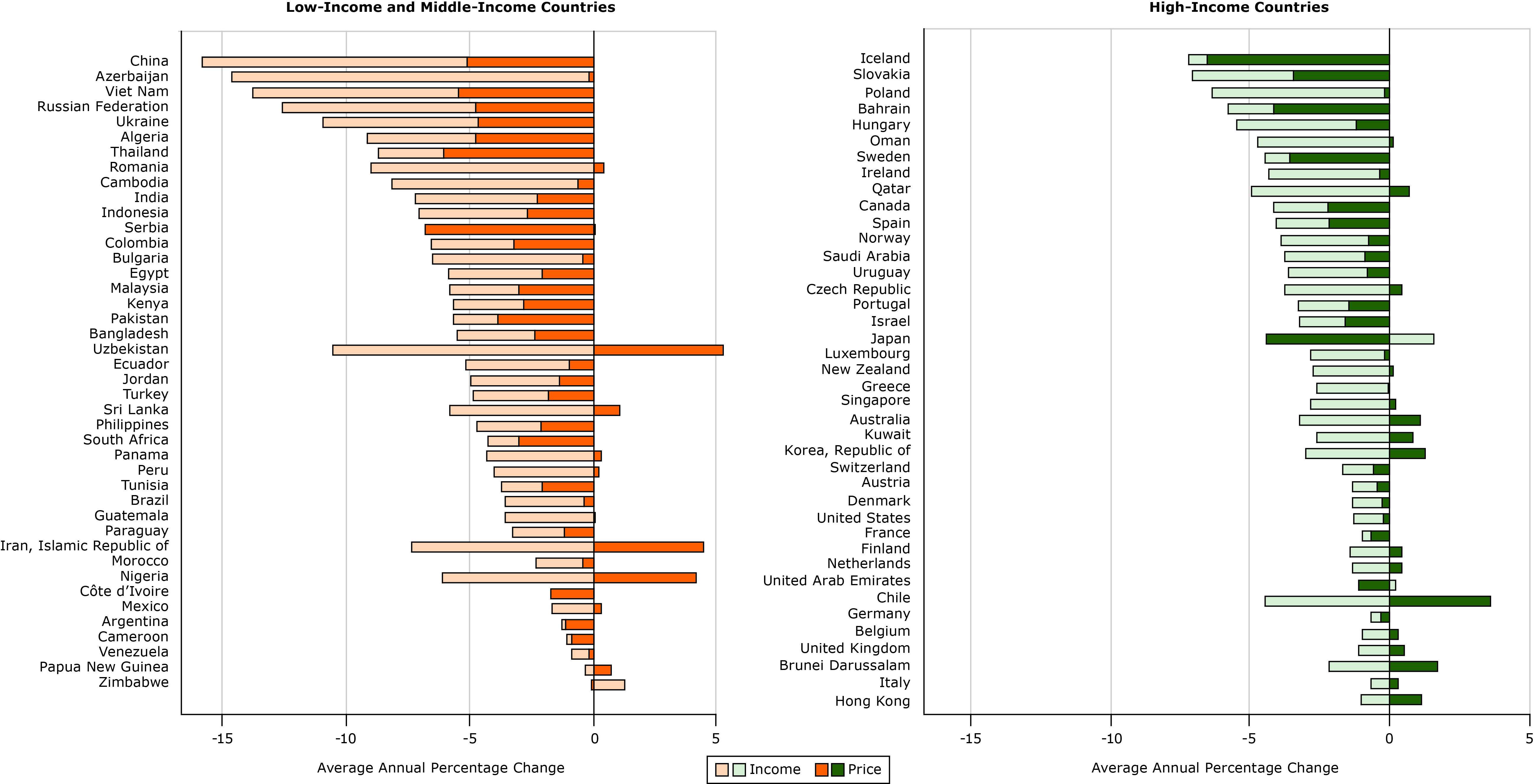 The American Cancer Society purchased the data for the research and supported all researchers during the analysis and writing of this article. The authors report no conflicts of interest of any kind (financial or otherwise). This study used aggregate economic data and was exempt from ethics approval according to the American Cancer Society Institutional Review Board of record, the Morehouse School of Medicine.
Top