Sometimes it takes a good story to jolt us out of our lethargy. 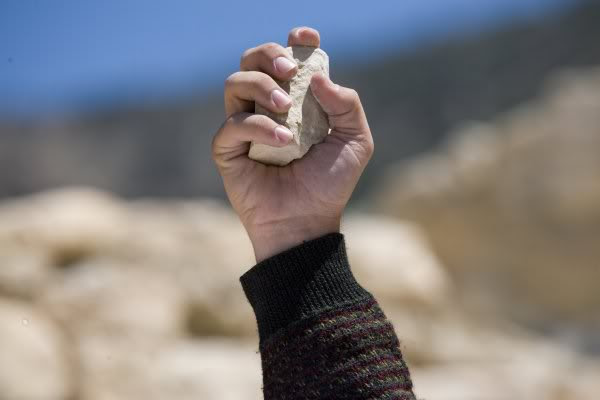 On January 21 of last year, the eve of the anniversary of Roe v. Wade, I was teaching a night class in literature. The topic was Shirley Jackson’s short story “The Lottery.” [For any who haven’t read it, a big SPOILER ALERT is necessary here.]

Jackson’s 1948 story was set in a rural community. The cheery townspeople gather one sunny, happy day, amidst much joking, for the annual lottery. Families draw from a black box, then, when an individual family is chosen, each member of the family draws again. Only at the very end of the story is the purpose of the lottery revealed. The lucky winner is stoned to death by the other townspeople, to ensure a good harvest for the coming year.

“The Lottery” originally appeared in the New Yorker, and the amount of backlash the editors received for its publication is now legendary. Hundreds wrote angry, confused letters demanding an explanation; hundreds canceled their subscriptions. Jackson told the San Francisco Chronicle the following year, “Explaining just what I had hoped the story to say is very difficult. I suppose, I hoped, by setting a particularly brutal ancient rite in the present and in my own village to shock the story's readers with a graphic dramatization of the pointless violence and general inhumanity in their own lives.”

Even today, more than 60 years after the story’s first publication, my students were angered by Jackson’s tale. How could anyone do such a thing? they wanted to know. Why did the townspeople even attend the lottery? How could they be so cheery-faced about it?

I was surprised at their shock—perhaps, having read “The Lottery” so many times, its effect on me had worn a little. Perhaps, in the age of Fifty Shades of Grey, I was merely surprised than anything could shock.

“Well,” said one of my students, “I think we value human life more now.”

I normally try to let my students meander their way to their own conclusions, prodding here and there, but to this, I had to respond. We value human life more now?

We talked about another story. In the days of Augustus, the Roman Empire was experiencing the effects of a full-blown moral collapse. Even married couples didn’t want children, and so infanticide and infant abandonment were rampant. Give birth to a girl? Leave her on a hillside. Your chosen method of birth control didn’t work? There were ways to take care of these problems.

It sounds terrible, doesn’t it? I asked my students. They agreed.

We kept talking. That January, our “conservative” leaders had chosen to drop the “Pain Capable Unborn Child Protection Act,” which would have banned abortions after 20 weeks, deeming it too polarizing to women voters. (The measure has since passed in the House, but has yet to be heard in the Senate.)

Twenty weeks. To put that in perspective, at my 20-week ultrasound, my husband and I could tell that our son had my eyes and his father’s nose and mouth.

The pro-life movement has made great strides in the past year, thanks in large part to the infamous videos published by the Center for Medical Progress. But our national numbness is still on full display.

Do we really respect life more these days? I asked my class that night. Even when a baby is so clearly alive that you can tell which parent he or she most favors, we can legally poison him or her to death, suck out the remains, and then sell those remains to a variety of “research” laboratories. And all in the glorious name of women’s “rights.”

The numbing of a culture

In teaching, there are those rare moments when a text really makes an impact. We sat there, at four tables, in the glow of the fluorescent lights, in complete silence for a moment. I was just as struck as they were.

For, like many conservatives, I have grown used to abortion. It is relatively easy for us to glibly agree that abortion is an evil that should be purged from the land, but secretly to be a little numb to the issue. For death—and here I mean not just the act of dying, but the absence of life—has so infused our culture that abortion has ceased to shock, even among conservatives.

We watch massive amounts of real-crime television, with constantly flickering images of torn, bleeding bodies. Our children play first-person-shooter video games. In real life, we take pills en masse to shut off fertility. We put our ill, our mentally incapacitated, and our aged in institutions, where we don’t have to deal with them. And we kill our own children in our wombs, and often outside of them.  In almost every way imaginable, we are a culture that embraces death wholeheartedly.

Most of us have even accepted that abortion is here to stay, and so we choose our battles. That one, we assume, is lost. Only the crazies keep fighting it, and we secretly try to distance ourselves from the more radical elements of the pro-life movement. You know the types—those who pray outside of abortion clinics and actually research political candidates’ voting records on life issues.

And yet, most of us are still horrified by “The Lottery,” and we assume that Jackson was talking about some other people, in some other land.

Sometimes it takes a good story to jolt us out of our lethargy.

Nicole M. King is the managing editor of The Howard Center’s quarterly journal, The Family in America: A Journal of Public Policy. She writes from Rockford, Illinois.
- See more at: http://www.mercatornet.com/articles/view/losing-the-lottery/17696#sthash.ZsNRmL1k.dpuf

It's hard to think of a story in American fiction more macabre than Shirley Jackson's "The Lottery". When it was published in 1948 in The New Yorker, hundreds of appalled readers sent letters of protest and South Africa banned it. As a narrative, it is quite skilful: you only grasp the horror of what is happening in the closing paragraph. To tell the truth, I thought it was quite amusing when I first read it in the 1960s, which may say something appalling about me. I won't spoil if for you -- you can read it here.
In a very interesting article below, Nicole King says that "The Lottery" can teach us a few lessons about how society views abortion. It couldn't be more timely. Today the US Supreme Court will hold an oral hearing in Whole Woman’s Health v. Hellerstedt, a case about access to abortion in Texas. The plaintiff is contesting a Texas law which will apparently close 34 out of the 40 abortion clinics in the state.