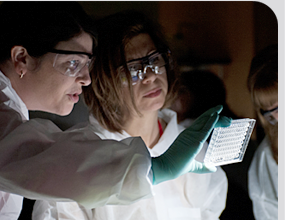 More than 23,000 Americans die each year from infections caused by germs resistant to antibiotics. While antibiotic resistance (AR) threats vary nationwide, AR has been found in every state. And unusual resistance germs, which are resistant to all or most antibiotics tested and are uncommon or carry special resistance genes, are constantly developing and spreading. Lab tests uncovered unusual resistance more than 200 times in 2017 in "nightmare bacteria" alone. With new resources nationwide, early and aggressive action—when even a single case is found—can keep germs with unusual resistance from spreading in health care facilities and causing hard-to-treat or even untreatable infections. For example, CDC estimates show that this aggressive approach could prevent 1,600 cases of CRE* in one state over three years. Health departments can lead the Containment Strategy and act swiftly with health care facilities and CDC at the first sign of unusual resistance.
Key points: 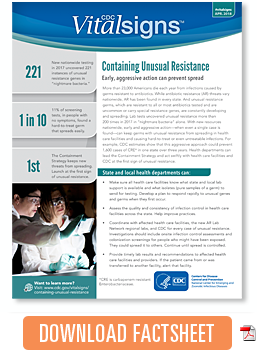